Striped bass are moving out of Chesapeake Bay and Delaware River spawning grounds. Schoolies are spreading north to Maine, and larger stripers are trickling into southern New England. Follow along as we track the Striper Migration. You can help by contributing to our weekly map updates—simply share your striper fishing reports here, and on social media with tag #stripermigration.

Remember that striper fishermen are now required to use circle hooks when using natural bait. Also, let’s all do our best this season to make sure that any stripers we release swim away healthy. 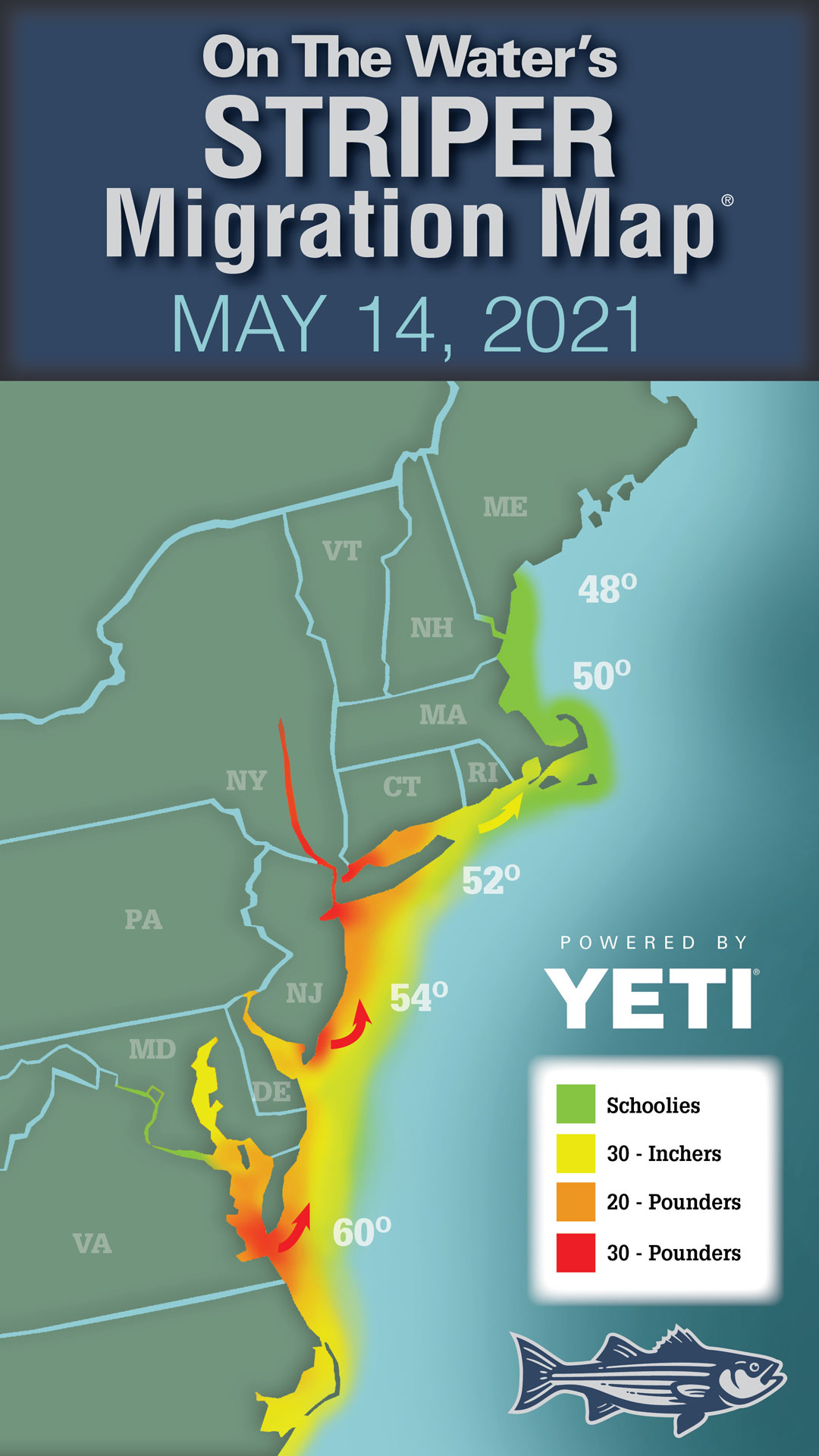 Post-spawn stripers are following the channel edges toward the lower Chesapeake Bay. Trollers working the channel edges have been taking advantage of trophy striper season to land fish over 50 inches. This Saturday, May 15, will be the last day of trophy striped bass season in the main stem Chesapeake Bay, The 2021 summer-fall season in most areas of the Chesapeake Bay and its tidal tributaries will be open May 16 through July 15, and resume Aug. 1 through Dec. 10. 2021 regulations for recreational striped bass fishing in the Chesapeake Bay are available on the DNR website.

Striped bass have finished spawning and mostly moved out of the Delaware River. Check out Delaware Surf Fishing for a complete report if you’re a fisherman in Delaware Bay.

Larger striped bass have officially arrived in many parts of South Jersey, with fish to 47 inches being released. Anglers trolling mojos and bunker spoons have began finding cooperative fish from Cape May to Island Beach State Park. A good sign for future seasons is the mix of different size classes seen by anglers this year as there has been good variance in sizes. Hopefully, this translates into good year classes for our future. f\Fishing continues strong in Raritan Bay with a lot of fish in the 20-pound range. Some bigger bass have been caught by boaters trolling for tuna.

Bass have moved into the Hudson River to spawn, and big, egg-laden females are being caught in upper stretches of the River from Catskill to Albany. Schoolie stripers are abundant all over Long Island, with more fish in 30-inch class mixing in and bigger post-spawn fish expected to arrive soon.
• Read the Long Island Fishing Report

Bass to 30 pounds are pushing into Western Long Island Sound to feed on bunker. Good numbers of migrating schoolies are along the Connecticut coast and in the rivers. Rhode Island has plenty of schoolies, with a few fish to 30 inches mixed in while anglers await bigger post-spawn fish to arrive.

Schoolie striper fishing has been good this week, although large schools of fish have pushed through Buzzards Bay and the Cape Cod Canal and continued north. A few bass in the 30-inch class have been reported around bunker (pogy) schools but anglers are still waiting for the big Chesapeake fish to arrive. Perhaps it will happen on the May 26 full moon? Share your predictions in the comments. Stripers have been reported on the South Shore, schoolie blitzes are occurring in Boston Harbor, and Cape Ann has had more bass trickling in on every tide.

Schoolies are officially in New Hampshire and southern Maine estuaries. Find the warmest water around to catch these early arrivals.