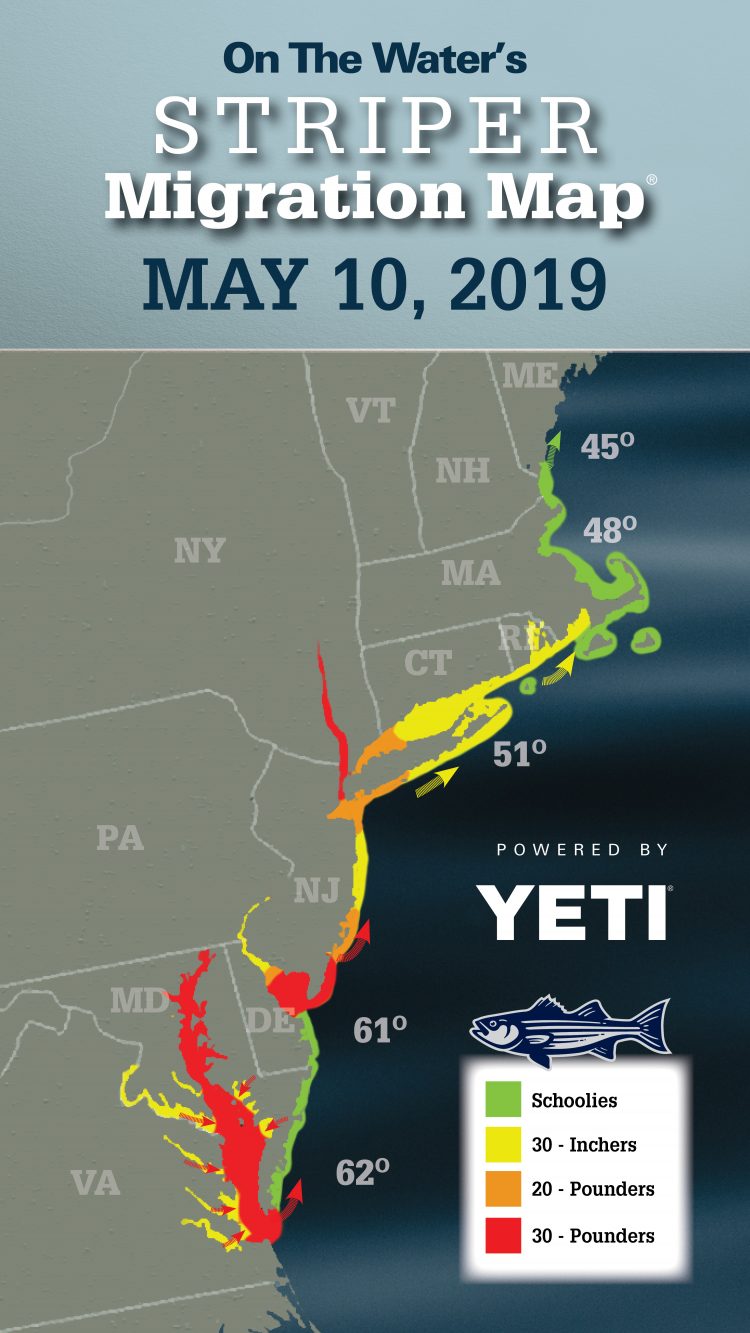 Mature striped bass are in spawning mode in Chesapeake Bay, the Delaware River, and the Hudson River. Immature stripers (schoolies) are moving up the coast and providing fun catch-and-release fishing as they continue to spread north through Massachusetts.

The Susquehanna Flats catch-and-release fishery for striped bass is now closed and will reopen on May 16.

The middle and lower regions of the Chesapeake are seeing increasing numbers of post-spawn striped bass, as the fish leave the rivers and move down the bay toward the ocean. There were few large striped bass reported in the Upper Bay, indicating that the fish have already left, or are still in the rivers spawning.

There are more reports of 40-inch and longer stripers showing up along the Cape May beaches, suggesting that some of the Delaware River fish have finished their spawn and are returning to the ocean.

A note from the NJDEP: Pennsylvania allows anglers to harvest a daily limit of two striped bass measuring 21 to 25 inches for a two month period from April 1 through May 31 from the Calhoun St. Bridge in Trenton downstream to the Pennsylvania state line. New Jersey still has a closed season. Anglers fishing the Delaware River from the New Jersey shoreline, or returning to New Jersey by boat and/or car in April and May must abide by New Jersey’s striped bass regulations. Possession of striped bass in New Jersey is illegal during this time period. Anglers should be aware that there are differing size limits and seasons for striped bass for each of the three states bordering the Delaware River. Anglers must obey the regulations for the particular state where they land (catch) striped bass.

In southern New Jersey, large stripers were reported from the beaches (including this fly-caught cow). Boat fishermen reported bass to 30 pounds in the ocean waters off Ocean County, a good sign that some stripers are migrating up from the south.

Off Northern New Jersey, the striped bass action remains centered on Raritan Bay, though that has waned a bit as more of the large bass ascend the Hudson River to spawn. Better numbers of small stripers are showing up in the surf throughout New Jersey.

Spawning striped bass are in the Hudson River, and fish into the 30- and 40-pound class have been reported up to Albany.

Stripers in the 30-inch class have bspread along Long Island, and larger stripers should be arriving soon as post-spawn fish from the Chesapeake and Hudson hit the island.

Slow pick today but we managed to find more spring migrators busting up bunker. 31” and 15 lbs. Released to fight another day!

The size of the stripers in Connecticut rivers continues to improve with more 30- to 34-inch reported this week.

Stripers to the mid-30-inch range were reported off Rhode Island this week, though schoolies still dominate the catches.

Sea-lice-covered schoolie stripers are all over Cape Cod, with fish spreading into Cape Cod Bay and along the backside beaches this week.  A few more keeper-sized fish were reported this week as well.

Who doesn’t like some early season striper carnage ? @onthewatermagazine #stripermigration

Migratory fish hit Boston Harbor and the North Shore this week, and some have made it as far as New Hampshire.