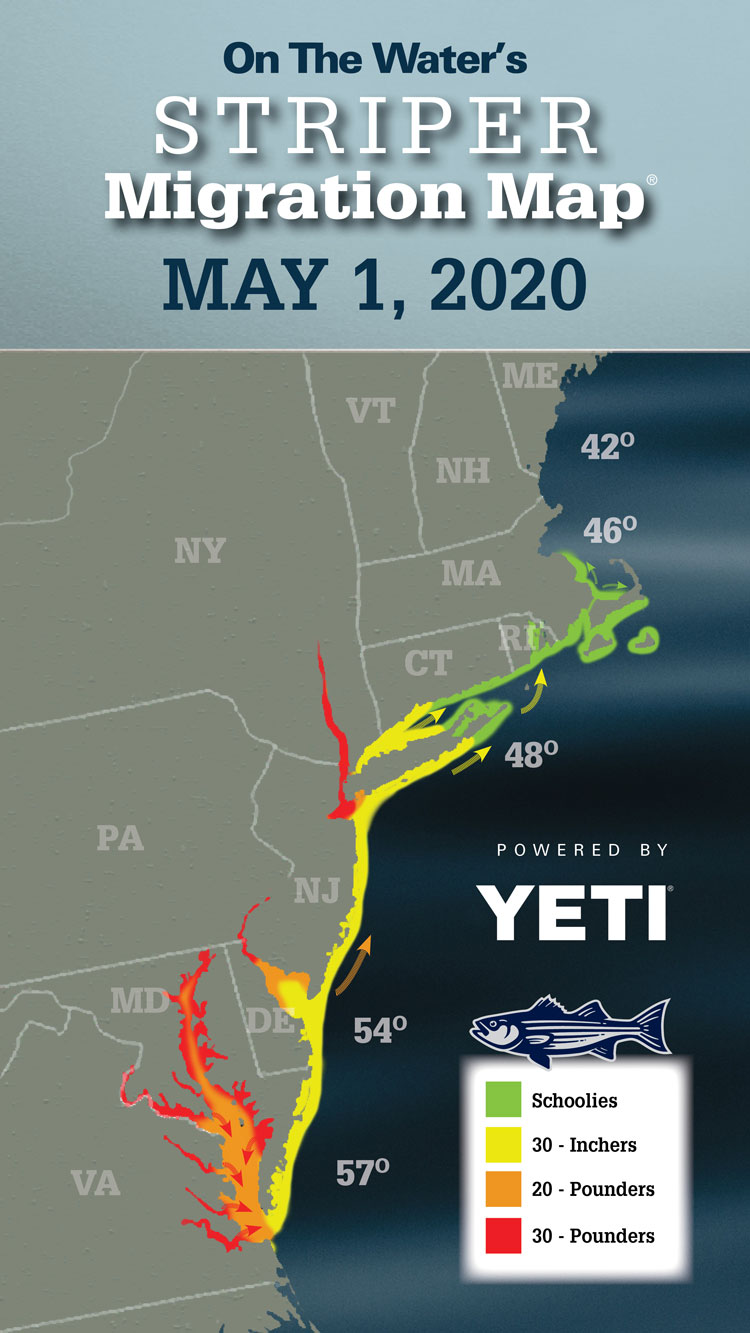 One thing you can be certain of in these uncertain times – the striper migration will continue. After a mild winter and an early start to striper fishing in many locations, a relatively cool and windy April might have slowed things down a bit.

Striped bass are spawning in Chesapeake Bay tributaries and moving up the Hudson River and the Delaware River. Schoolie striper fishing has been very good inside New Jersey rivers, backwaters, and bays, bass are moving east along the south side of Long Island and in Long Island Sound along the Connecticut shoreline, and schoolie stripers have arrived in Rhode Island and Massachusetts.

Info is hard to come by right now as Maryland’s Stay at Home Order in response to the COVID-19 crisis prohibits recreational boating and recreational catch-and-release fishing (limited subsistence fishing is allowed if you are seeking food for you or your family), but we can assume that striped bass (rockfish) are actively spawning in the tributaries as surface water temperatures surpass 60 degrees. COVID aside, Maryland opened to striped bass fishing on May 1 and issued guidance for the striped bass season.

Striped bass (rockfish) have moved up into the Delaware River to spawn. Be sure to follow your state’s regulations requiring catch-and-release of striped bass and the use of circle hooks when fishing bait.

In New Jersey, access is getting easier now that state parks are reopening and most bait shops are offering curbside service. The bays, rivers and bridges continue to fish well for striped bass to 30 inches, with smaller soft-plastics on single-hook jigs fishing well. Larger bass are beginning to show up on the ocean side from Cape May to Atlantic City but effort has been low as the wind has been tough. The Raritan Bay striper bite has slowed as bass are moving into the Hudson, but there have still been plenty of big fish caught this week by kayakers and boaters on plugs, shads, spoons and mojos. Surfcasters are catching on bloodworms and bunker chunks. Take advantage of curbside and delivery service from your local tackle shop and be safe.

Great colors the other night before this band of crappy weather came in. So stoked on the @ccwnj08302 DP4 – has been the go to all spring. That and the TAK spoooooooon! #shorecatch #reelfreedom??

It’s been one hell of a month fishing with my father, enjoying every minute of it! ??? #striper #bass #simmsfishing #stcroixrods @georgeradlof

Got out before first light on a solo mission and got it done not a single kayak, boat or surf fisherman around, best pics I could get, estimate 40+ inches 30 pounds, all fish caught this morning were all 30+ inches probably got around 6?

Hudson River spawning stock stripers are pushing up the Hudson to spawn. The fishing has picked up this week with bass to 30 pounds as far upriver as Troy.

Bigger striped bass are at the west end of Long Island, but surf fishing continues to improve as migrating stripers spread east along the south side beaches and along the north shore in Long Island Sound. Big bluefish have also appeared in the surf this week. Anglers are reminded to be safe and practice social distancing.

Migrating stripers are making a good showing along the shorelines of Connecticut, blurring the lines between fresh fish and holdovers. Schoolie stripers are increasing in number in Rhode Island over the past week and have pushed up into Narragansett Bay, with more 24-inch-plus fish in the mix lately.

Schoolies have arrived in Massachusetts, with reports coming from Buzzards Bay, the south side of Cape Cod, Martha’s Vineyard and Nantucket. This week, we received the first reports of striped bass on the South Shore of Massachusetts and expect to hear of bass from Boston north to Cape Ann by the end of next week.

A post shared by New England Fishing (@newenglandfishingofficial) on Apr 30, 2020 at 3:43pm PDT