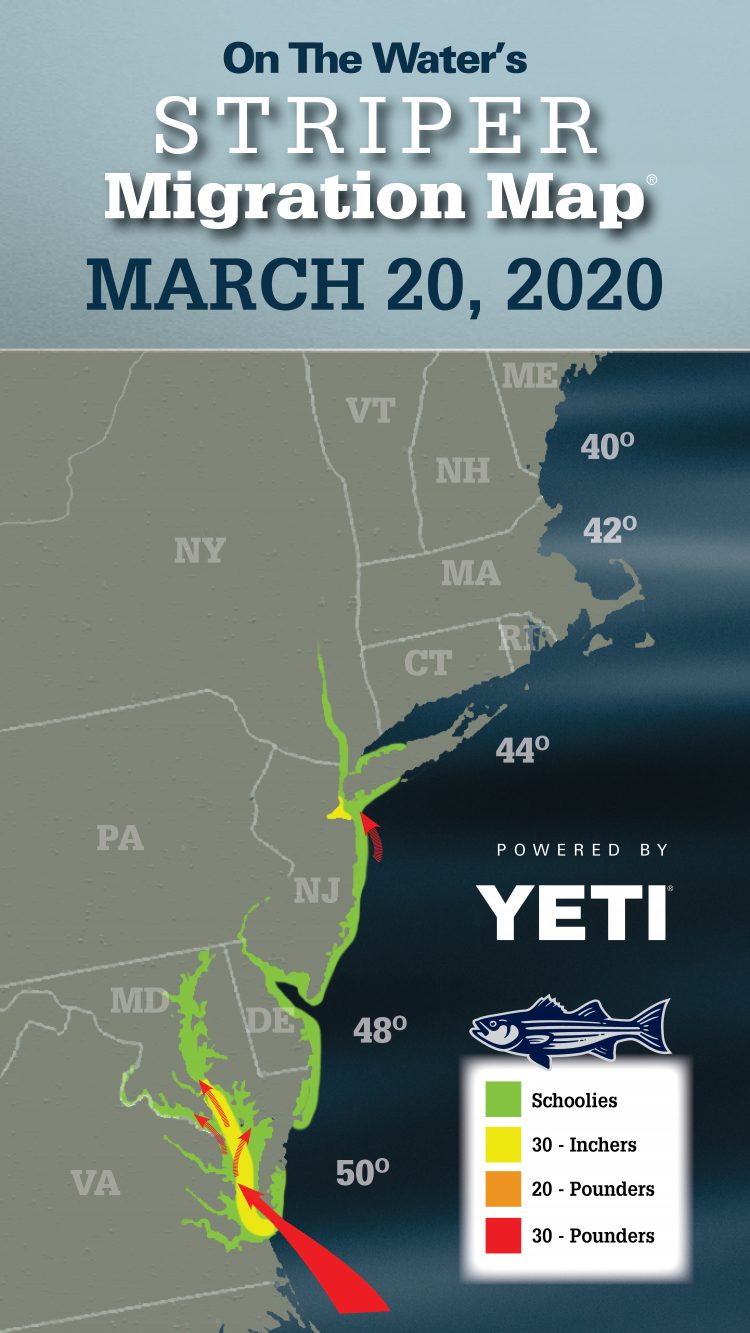 One thing you can be certain of in these uncertain times – the striper migration will continue! Thanks to a mild winter, we’ve reached the start of spring with ocean waters about 5 degrees higher than last year at this time. Could this mean an earlier start to striper fishing in many locations?

Striped bass are moving toward spawning grounds in Chesapeake Bay tributaries, and smaller stripers are getting active in warming inshore areas in Delaware Bay, inside New Jersey rivers, backwaters, and bays, and at the west end of Long Island. Follow along as we track the Striper Migration. You can help by contributing to our weekly map updates—simply share your striper fishing reports here, and on social media with tag #stripermigration. Be sure to follow local guidelines and stay safe and healthy!

On the upper Chesapeake, surface water temperatures are rising toward 50 degrees. There has been some catch-and-release action for striped bass at the Conowingo Dam, according to reports from Maryland’s Department of Natural Resources. There has been a little catch-and-release action with striped bass near the Bay Bridge and Scott Key Bridge piers. Most are jigging near the pier bases. Striped bass regulations for the Spring Trophy Season can be viewed online. There is some catch-and-release jigging action at the Calvert Cliffs Power Plant warm water discharge this week, mostly for smaller striped bass. Surface water temperatures in the middle bay region are running about 47 degrees, still a bit chilly for striped bass. The striped bass are moving up the bay and entering the spawning rivers, getting ready for the spawn in late March and early April.

In southern Jersey, the back bays are fishing well for striped bass, with bloodworms the top bait. There are lots of schoolie striped bass at most of the bridges from Toms River south to Cape May. The outgoing current has been the better bite with the temperatures hovering in the low 50’s. In Barnegat Bay, striped bass are spreading out and hitting bloodworms, soft plastics, and plugs. Raritan Bay has also been giving up fish from the bay beaches on bloodworms, with more small keepers in the mix recently. With huge schools of bunker in the area, it’s not surprising that there has been a few reports of bigger bass to 30 pounds hitting shads and mojos.

Backwater areas on the West End of the island are holding some schoolie stripers, and there have even been some reports of schoolies on the beaches around Jones Beach and Fire Island.

Got on some nice holdovers with @john_drew11 and @alex_drew17 I caught about 17 striped bass and one perch really good day multiple triple ups and double ups biggest fish was 26 between all of us we had about 50 we did have two on soft plastics but everything else was on @jacksbait blood worms ??? . . . #stripedbass #holdovers #bass #bassfishing #onthewatermagazine #thefishermanmag #bassfishing #stripedbassfishing #tightlines #springrun #fish #fishing #stripedbassmigration

Holdover striper fishing in the Housatonic River and in Connecticut River tributaries should improve as the fish will only get more active with warming water and the arrival of river herring.

Holdover striped bass are stirring in some fresh and brackish waters on Cape Cod and the greater Boston area as wates warm and river herring arrive.