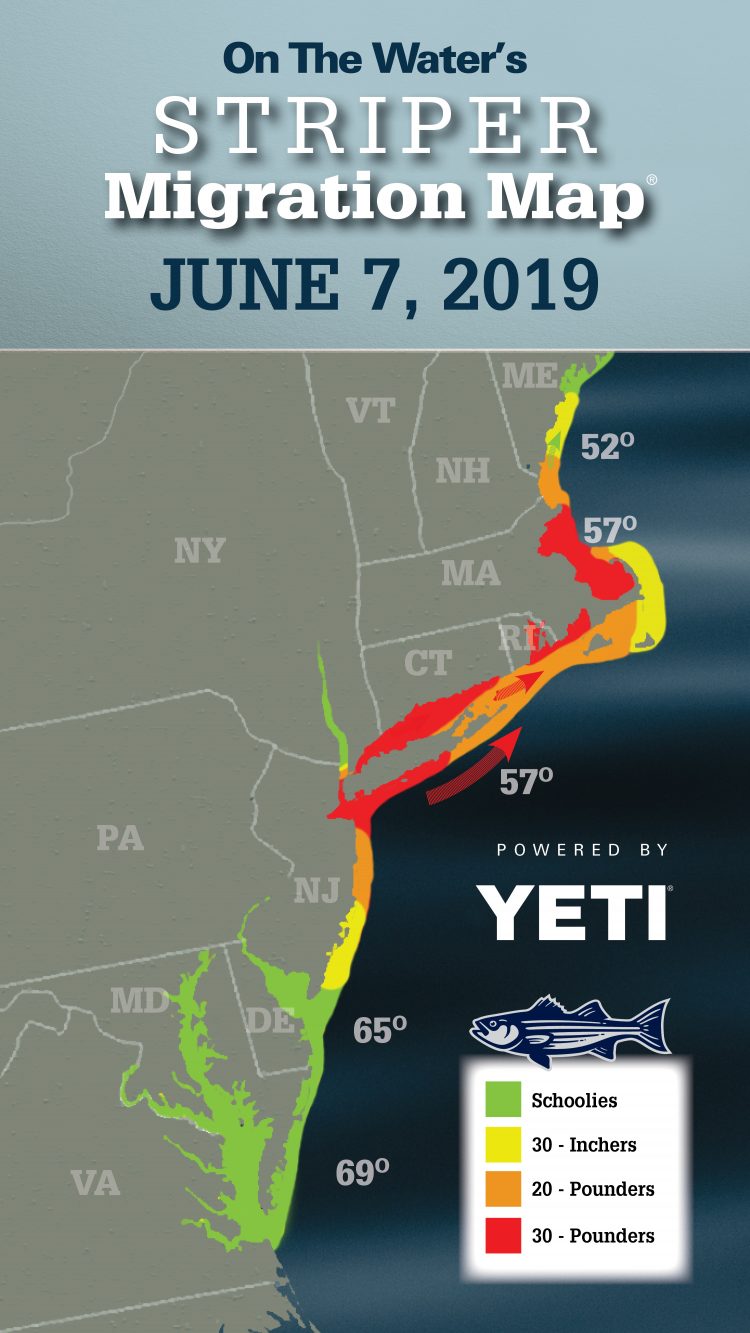 Big striped bass continue to head up the coast. The trophy striper bite has shifted east along the south shore of Long Island, and a slug of big bass has moved into and through the Cape Cod Canal into Massachusetts Bay. Make sure you’re signed up for the Striper Cup!

Spawning-size stripers have left the bay. Light-tackle jigging and chumming/chunking are producing school-sized striped bass and catfish. The summer season began June 1 and now anglers can fish wherever they wish to in the tidal rivers or bay, and settle into the familiar limits of two fish at 19 inches to 28 inches, or one fish above and one below 28 inches. Maryland DNR Fishing Report

In southern New Jersey, schoolie striped bass have been pretty cooperative in the inlets. In northern New Jersey, shore anglers are catching a mix of bass and blues, and while the trophy striper fishing has slowed down there are still some big bass to 40 pounds being caught on mojos, bunker spoons, and live bunker off Sandy Hook and in Raritan Bay.

Big striped bass to 60 pounds continue to slowly slide east along the South Shore of Long Island, with boaters doing well on live bunker and trolling mojos and bunker spoons off Fire Island. Twenty-pound stripers are becoming more common at the East End around Montauk. Big bass continue to hold in western Long Island Sound, with fish in the 30- and 40-pound range.

The biggest bass still holding in Western Long Island Sound but quality fish are spreading east to Niantic. Large bass continue to move throughout Narragansett Bay and off Newport.

A post shared by NewportSportFishingCharters (@newportsportfishingcharters) on Jun 4, 2019 at 5:00am PDT

Went for the photo only to fall back into chest deep water… I pushed the fish up and poked my head just in time for the timer to go off. . . . . . #zeebaas #lamiglas #onthewater #surfcasting #stripedbass #saltwaterfishing #surfcastersjournal #onthewatermagazine #stripermigration #catchandrelease #springrun #odm #guycotten #simms #flatlander #rhodeisland #outflow

More 20- and 30-pound stripers are in the mix around the Cape, from Buzzards Bay to the Cape Cod Canal and in Cape Cod Bay.  Big bass including at least one 50-pounder have been reported in Boston Harbor. In New Hampshire, bass 34- to 36-inch bass are filling in.

release video of this 49 inch dinosaur. all fish go back no matter what. 90% of the time I only use single hooks whether it be a circle hook for eels or a jig head for big soft plastics. definitely brings the survival rate on the release way up. barely ever use lures with trebles anymore. gotta treat these fish to the fullest. only way to get there numbers back up. fish was only out of the water for less than a minute. swam away very quickly to #fishing #fishinglife #onlylife #stripedbass #striper #boston #bassachusetts #massbass #catchandrelease #released #cpr #spring #catchandreleasecrew #hobie #outback #penn #slammer #diawarods #proteus #bassfrittah #striperlivesmatter #cowcity #bucketmouth #onthewater #onthewatermagazine