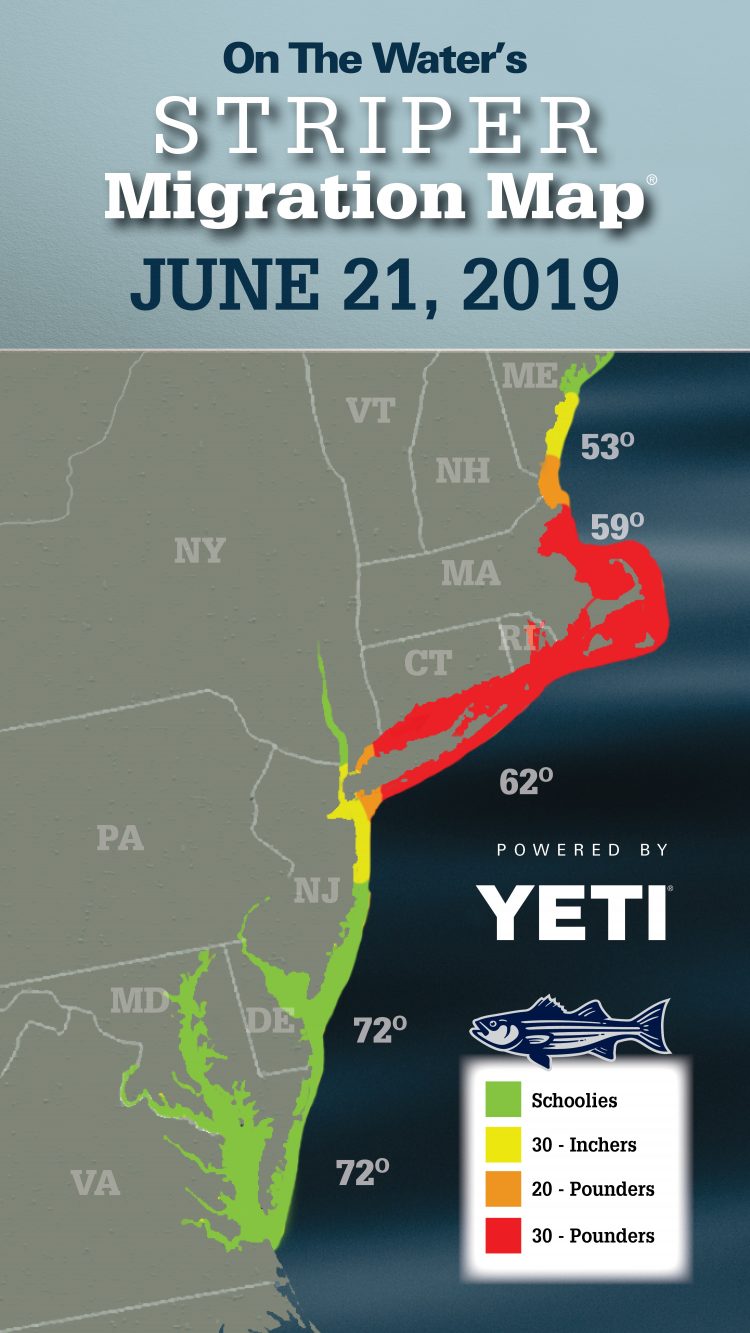 The full moon tides sparked some striped bass blitzes along the coast. If you haven’t done it yet, go sign up for the Striper Cup and you can win incredible prizes every week just for sending in striper photos!

Spawning-size stripers have left the bay. The summer season began June 1 and now anglers can fish wherever they wish to in the tidal rivers or bay, and settle into the familiar limits of two fish at 19 inches to 28 inches, or one fish above and one below 28 inches. Maryland DNR Fishing Report

In southern New Jersey, schoolie striped bass to 24 inches have been pretty cooperative. In northern New Jersey, shore anglers are catching a mix of bass, blues, and the occasional black drum. Trophy striper fishing has slowed as most of the fish have headed east and up the coast.

The big bass that had been in New Jersey are being caught off the South Shore of Long Island from Fire Island to Montauk. On the North Shore, larger bass are making their way toward the central sound from the west, as 30- to 40-pound bass have made it as far as Cold Spring Harbor.

Twenty-pound stripers are becoming more common at the East End around Montauk.

The striper fishing still seems to be lagging in eastern Connecticut, as most of the big bass and bunker hold in the Western Sound. Big stripers were reported around Block Island this week, while Watch Hill to Newport is producing consistent bass fishing with 15- to 25-pound fish in the mix.

Full moon “breaking tides” in the Cape Cod Canal sparked a blitz of big striped bass feeding on squid. Bass have also filled in the Monomoy rips, and from Cape Cod Bay to the South Shore bass are feeding on mackerel. Fishermen around Boston are seeing good numbers of mid-40-inch stripers.

Nothing like an armada of 45-50 inch bass. Best day of my life ? #stripercup #stripedbass #onthewatermagazine

Cold water has caused a slow start to the striper fishing, but big bait has arrived and there are schoolies and fish in the 30-inch class in the rivers.