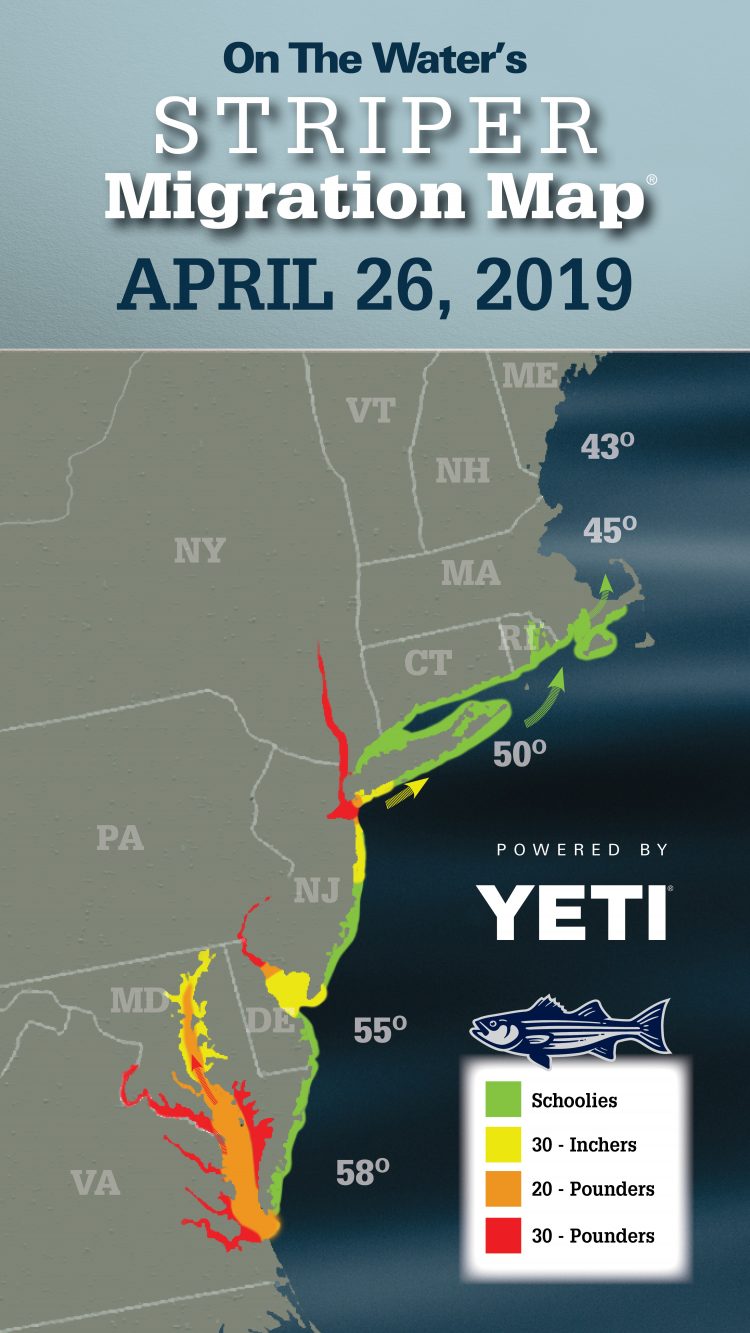 Seasonably mild weather appears to have the striper migration a week or two ahead of the slow start we experienced in 2018. Striped bass to 40 pounds are moving through northern New Jersey and into the Hudson River to spawn. Big female stripers are being reported in the Delaware River, another important spawning ground. In Chesapeake Bay, the striper spawn is peaking in many of the mid Bay rivers, with some post-spawn bass already beginning to drop down out of the lower Bay tributaries. “Fresh” migratory schoolies hit Rhode Island, Martha’s Vineyard, and Cape Cod this week and will continue to spread north along the Massachusetts shore over the next 7 days.

The start of the Maryland striped bass season was very slow with windy conditions making fishing uncomfortable. Virginia decided to cancel their spring trophy season as a conservation measure to protect striped bass.

The Maryland Dept. of Natural Resources is reporting that catch-and-release fishing action in the Susquehanna Flats areas has been poor to due to poor conditions – cold, muddy water. It is still a bit early to expect a lot of post-spawn striped bass to be available to those trolling the steep channel edges of the middle bay. Although the peak of the striped bass spawning activity has been over for about a week in the Choptank River, there is still spawning going on. The lower bay offers one of the better locations to intercept early post spawn striped bass exiting the Choptank, Nanticoke, Patuxent or Potomac rivers this week. They all have to pass through the region. So far the fishing has been very slow as boats grind out the miles with little results to show for their efforts. Somewhere around the first week of May should offer better success. There is still some spawning going on in the spawning rivers, especially the Potomac River.

Keeper stripers have been reported by boaters fishing bunker chunks in the upper Delaware Bay around the Reedy Island Area. Large female striped bass have moved up into the Delaware River to spawn. Please consider using inline circle hooks when fishing bait. Remember that circle hooks are required for all bait fishing above the South Jetty at the C&D Canal.

A note from the NJDEP: Pennsylvania allows anglers to harvest a daily limit of two striped bass measuring 21 to 25 inches for a two month period from April 1 through May 31 from the Calhoun St. Bridge in Trenton downstream to the Pennsylvania state line. New Jersey still has a closed season. Anglers fishing the Delaware River from the New Jersey shoreline, or returning to New Jersey by boat and/or car in April and May must abide by New Jersey’s striped bass regulations. Possession of striped bass in New Jersey is illegal during this time period. Anglers should be aware that there are differing size limits and seasons for striped bass for each of the three states bordering the Delaware River. Anglers must obey the regulations for the particular state where they land (catch) striped bass.

In southern New Jersey, stripers have begun to bite around Cape May and in the Delaware Bay area on chunked bunker. While most of the stripers in south Jersey are schoolies, they are getting more numerous and the average size is creeping up. Bluefish have been showing from Sea Isle to LBI. Northern New Jersey striper fishing has been on fire, with prespawn female fish from 15 to 40 pounds in the Barnegat Bay area. However, the fishing might be slowing down as the bass are pushing into the Hudson River to spawn.

Prespawn striped bass are moving up the Hudson River. Heavy rains and muddy conditions have hampered efforts, but more big stripers should be entering the river over the coming week and making their way north.

Schoolie stripers are spreading out along the south side of Long Island all the way to Montauk and biting well in the harbors on the north side of the island. Larger stripers should become more numerous over the coming week. A few racer bluefish have been reported on the south side beaches as well.

Striper fishing in the Housatonic River and in Connecticut River has been good, and stripers are moving around and spreading out along the beachfronts.

Migratory stripers arrived in Rhode Island, with good numbers of fish at the West Wall and some fish along the South County beaches. Fresh fish are mixing with holdovers in upper Narragansett and Mt. Hope bays.

Fresh schoolie striped bass appeared on the Vineyard last weekend and have since been reported along the south side of Cape Cod and in Buzzards Bay. Over the next week, we expect to hear reports of fish along the south shore of Massachusetts spreading from the Cape Cod Canal to Scituate.