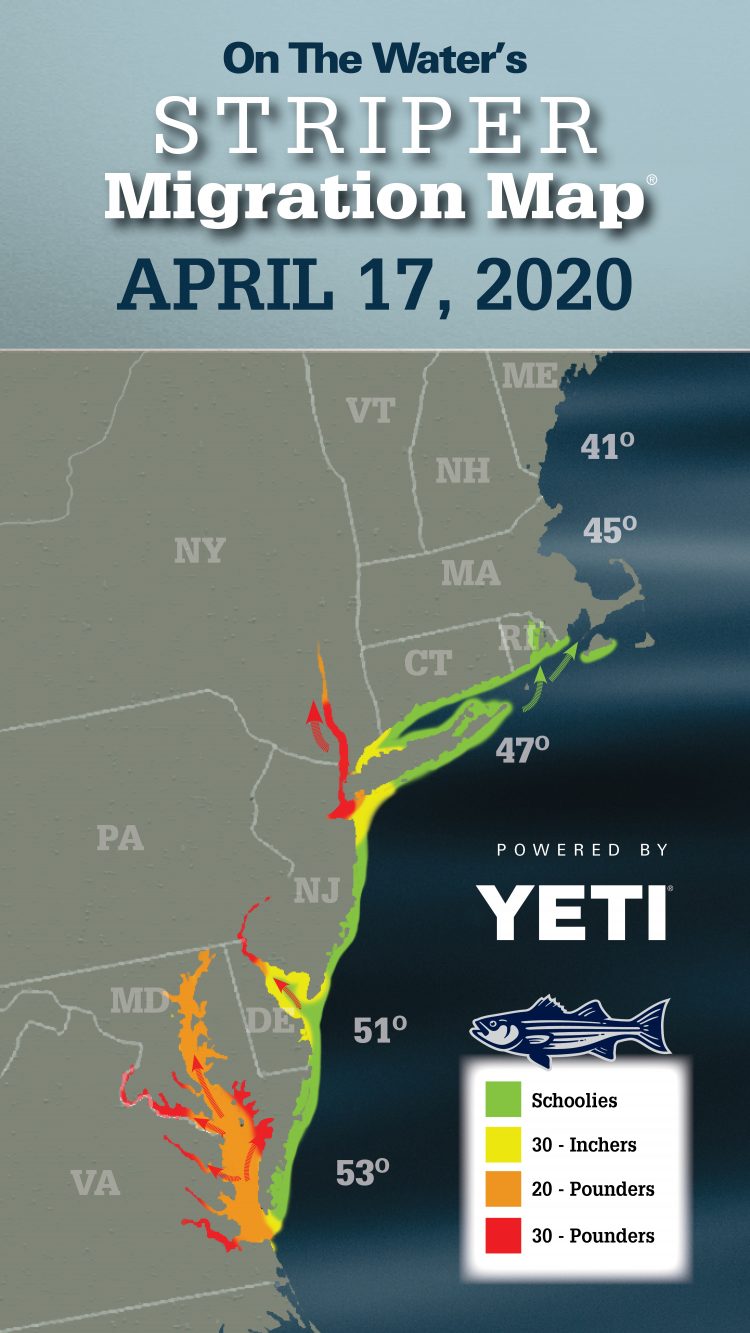 One thing you can be certain of in these uncertain times – the striper migration will continue. So far, this fishing season has been notable for the early start to striper fishing in many locations.

Striped bass are spawning in Chesapeake Bay tributaries, and big pre-spawn stripers are heading into the Hudson River and the Delaware River. Schoolie striper fishing has been very good inside New Jersey rivers, backwaters, and bays, and schoolies are moving east along the south side of Long Island and in Long Island Sound along the Connecticut shoreline.

Info is hard to come by right now as Maryland’s Stay at Home Order in response to the COVID-19 crisis prohibits recreational boating and catch-and-release fishing (limited subsistence fishing is allowed if you are seeking food for you or your family). COVID aside, Maryland prohibited all catch and release of striped bass in the Chesapeake Bay as of March 31 and will not open to striped bass fishing of any kind until May 1. We can assume that striped bass (rockfish) are actively spawning in the tributaries as surface water temperatures surpass 60 degrees. 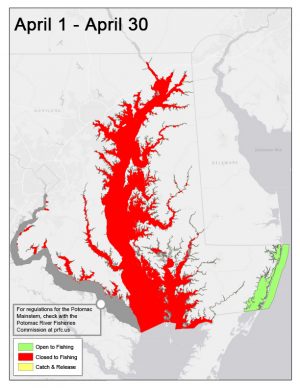 Striped bass (rockfish) are moving through upper Delaware Bay and into the Delaware River to spawn. Be sure to follow your state’s regulations requiring catch-and-release of striped bass and the use of circle hooks when fishing bait.

In New Jersey, access is tough but many areas remain open and most bait shops are offering curbside service. The bays, rivers and bridges continue to fish well for striped bass to 30 inches, with bloodworms and smaller soft-plastics on single-hook jigs fishing well. Evenings and early mornings are fishing especially well. The Raritan Bay striper bite might have hit its peak as big pre-spawn Hudson River stripers to 30 pounds have been feeding heavily. Kayakers and boaters have been catching on plugs, shads and mojos. Surfcasters are catching on bloodworms and bunker chunks. Take advantage of curbside and delivery service from your local tackle shop and be safe.

Hudson River spawning stock stripers continue to gather and feed in Raritan Bay, and eventually they will push up the Hudson to spawn. While most of the bass being caught in the river are in the 18- to 30-inch range, some bigger spawners to 30 pounds have begun to appear in catches from Newburgh north to Catskill.

While the bigger bass are at the west end of the island, migrating schoolie stripers continue to spread east along the south side beaches and along the north shore in Long Island Sound, with more 28-inchers mixed in. Anglers are reminded to be safe and practice social distancing.

Migrating stripers are making a good showing along the shorelines of Connecticut, blurring the lines between fresh fish and holdovers. Schoolie stripers arrived in Rhode Island over the past week and have pushed up into Narragansett Bay.

Schoolies have arrived in Massachusetts, with the first reports coming, as they do every year, from the south side of Martha’s Vineyard and far western Buzzards Bay. They should trickle into the salt ponds and rivers along the south side of Cape Cod and throughout Buzzards Bay over the coming week.  Holdover striped bass are stirring in fresh and brackish waters on the South Shore and in the greater Boston area.