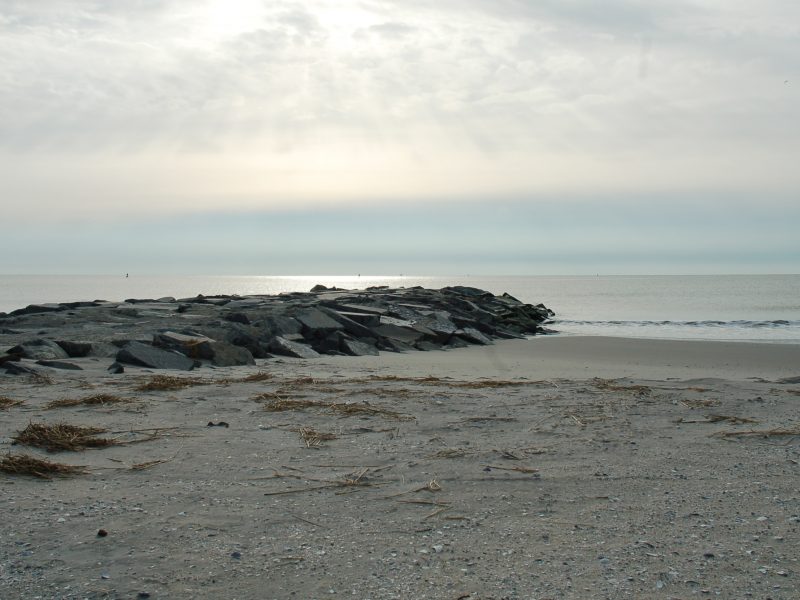 When you enter Atlantic City by way of the AC Expressway, stay on Christopher Columbus Boulevard until it turns into South Missouri Avenue. At the first intersection, make a left on Pacific. Drive past Caesars, Ballys, the Hard Rock, and the Showboat, and hook a right two blocks from the end of the island. Follow the road to the end, park your car, walk onto the boardwalk and cast your eyes upon the waters where a world-record striped bass ate its last supper.

Most of the world knows Vermont Avenue as one of the low-value, pale-blue properties on the Monopoly Board. Striper fishermen know it as the street where the largest-ever surf-caught striped bass met its end. It was on the jetty at the end of this street that Albert McReynolds hooked, battled and landed a 78-pound, 8-ounce bass on a stormy September night in 1982.

The jetty is unremarkable. It extends about 100 feet into the ocean, though the exact distance changes with each season, storm, and beach-replenishment project. The Oriental Avenue jetty, a few hundred yards north, borders Absecon Inlet and would appear the more productive jetty—until you consider the conditions on the night of the record catch.

Absecon Inlet drains a large marsh that teems with baitfish, fluke, snapper blues, weakfish, and small stripers. Large schools of mullet and peanut bunker grow and mature in the marsh over the summer, and during the large moon tides in September and October, begin their migrations south. The new moon on September 17, 1982 and accompanying large tides inspired big schools of mullet to flee the bay and begin their journey south.

The mullet leaving the Absecon Inlet on September 21 were met by a strong nor’easter. The high winds and large waves pushed the mullet toward the beach inside the Oriental Avenue Jetty. There, an early-migrating school of stripers used the weather to trap the baitfish against the north side of the Vermont Avenue Jetty, where an Atlantic City lifeguard using a small swimming plug set the mark for surfcasters throughout the Northeast.

It’s hard to say if large striped bass still visit the Vermont Avenue jetty—a lot has changed since 1982, both above and below the water. The rocks of the jetty remain the same as they were when Al McReynolds cast from them three decades ago. Thanks to the long shore current, the jetty’s north side still enjoys deep, fishable water and still creates a likely spot for stripers to trap baitfish. Mullet still run the beach, but the South Jersey striper run doesn’t overlap the mullet migration as it once did. Today, September 21 would be early to see stripers of any size roaming the South Jersey surf.

In 1982 Atlantic City was being reborn. The vote to pass legalized gambling in 1976 had breathed new life into the ailing city as casinos created jobs and attracted millions of visitors. Today, Atlantic City is in decline. Casinos in Philadelphia, New York and Connecticut have taken a bite out of the city’s tourism, while crime and unemployment are as high as they were before the casinos. This has left the inlet section of the city—where Vermont Avenue is located—undeveloped at best, unsafe at worst.

Despite the remarkable catch made from those rocks, you aren’t likely to hear a tackle shop recommend the Vermont Avenue Jetty. You’re even less likely to read about it in the current fishing report. But on a brisk fall night with big tides and a driving Northeast wind, the fish of a lifetime might just be gorging along those rocks.

It wouldn’t be the first time.