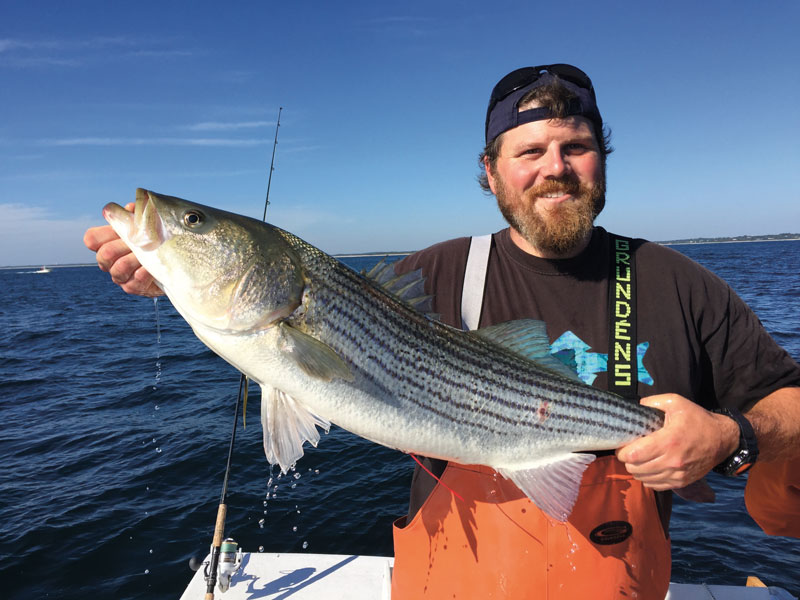 Ben Gahagan, a diadromous fish biologist with the Massachusetts Division of Marine Fisheries, displays a striper outfitted with an acoustic tag prior to release. Photo provided by Andrew Jones.

Every year, adult stripers migrate from the open ocean into tributaries from North Carolina to Canada to spawn, presumably heading back to the same locations year after year. But when these fish (and their progeny) return to sea and become available to anglers, it’s anyone’s guess where they came from. Are the fish in your backyard from the Chesapeake or the Hudson? The Kennebec or the Miramichi? All the above? 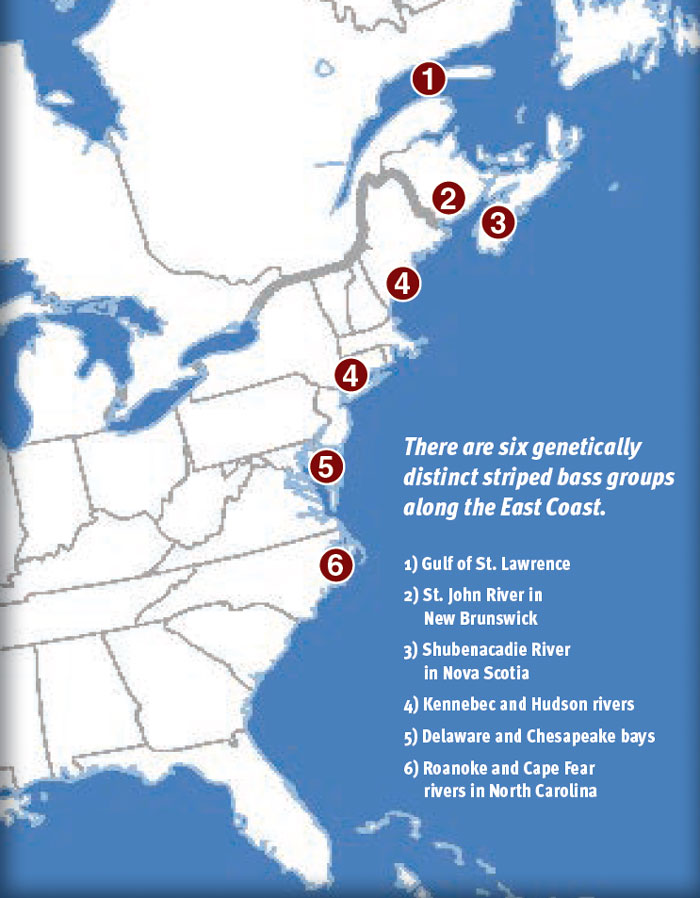 These aren’t trivial questions, as a fundamental element to effective fisheries management is understanding a species’ stock structure and, to the extent possible, managing each spawning population separately. For stripers, such a task is particularly urgent given last year’s news from the Atlantic States Marine Fisheries Commission (ASMFC) that they’re overfished. Fortunately, scientists at the Massachusetts Division of Marine Fisheries (MADMF), the University of Massachusetts Amherst, and the University of New Brunswick (UNB) have developed a novel genetic approach to identify distinct striped bass populations along the coast.

“For each river system, we focused on collecting spawning-condition adults since we knew that those individuals belonged to that river’s population,” explained Ben Gahagan, a diadromous fish biologist with MADMF and a collaborator on the study. The genetic analysis, led by UNB PhD candidate Nathalie LeBlanc and Associate Professor Dr. Scott Pavey, entailed identifying single nucleotide polymorphisms (SNPs, or “snips”)—small variations at certain locations in striper DNA—and seeing whether those variations differed in fish sampled from other areas.

The team identified six genetically distinct striped bass groups along the coast. Interestingly, the genetics of the three Canadian populations were highly distinct, both from each other and from the U.S. populations, meaning that they’re each largely isolated, possibly due to the complex geography of the Canadian Maritimes.

The three U.S. groups consisted of the Kennebec and Hudson rivers (genetically similar because Hudson River fish were used to restore the Kennebec’s population in the 1980s), Delaware and Chesapeake Bay, and the Roanoke and Cape Fear rivers in North Carolina. While the lack of genetic separation between the Delaware and Chesapeake Bay fish may be surprising at first glance, a man-made intervention could be the reason. “In several tagging studies we’ve observed adult striped bass migrating between upper Chesapeake Bay and and the head of Delaware Bay using the Chesapeake and Delaware Canal, which was constructed in the early 1800s,” said Gahagan. “Before the canal was built, fish from each of these estuaries may well have been genetically distinct. Alternatively, the Chesapeake Bay population may have contributed to the recovery of the Delaware Bay population after the latter collapsed decades ago.”

It’s worth noting that within each of these six populations, there is likely far finer-scale structuring down to the level of individual tributaries; indeed, the team found some evidence of genetic differentiation between fish sampled from eastern and western Chesapeake Bay. However, because it only takes a few fish in a generation straying from one spawning tributary to another to mask such genetic differences, other approaches like tagging and otolith (ear bone) chemistry analysis are needed for such specific detection.

Identification of these six populations wasn’t a surprise, as earlier studies have identified them, too. The big deal here is the degree of accuracy with which the SNP genetic approach can assign an individual fish to one of them.
“For a given striper, we are able to determine the group it belongs to with 99 percent accuracy, a 39 percent improvement over previous methods,” Gahagan said. “It’s a game-changer that really highlights the applicability of this tool for management purposes.”

Next Steps: Toward Stock-Specific Management?

Having identified the genetic markers to assign a fish to a population, the next step in this work is scaling up the analysis. From 2015 to 2019, with funding from MADMF (including from recreational fishing license sales) and help from commercial fishermen, charter captains, and private anglers, MADMF biologists collected scale and fin clip samples from over 5,000 striped bass caught in Massachusetts waters. The team is hard at work to process these samples and determine the percent contribution of each spawning area to fish off the Massachusetts coast. Among those 5,000 fish are 260 that MADMF equipped with acoustic tags to better understand striped bass movements. By coupling genetic information and tag data, the researchers can explore the behavior of fish from different spawning populations.

An advantage of SNPs is that once developed, any lab can use the markers independently, unlike previous popular genetic methods. The research team plans to make their methodology publicly available so that states up and down the coast can establish their own genetic sampling programs to understand where their striped bass come from.

“The ultimate goal is to use the genetic signature from each population to classify fish caught along the Atlantic coast to their spawning location, which could revolutionize the way the ASMFC manages striped bass,” Gahagan said. “Instead of managing the species as a single mixed stock, we can finally begin to manage on a stock-by-stock basis, reducing uncertainty and hopefully improving fishing opportunities in the future.”