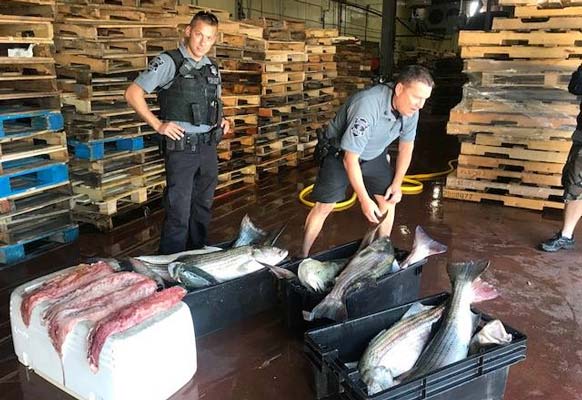 Earlier in the morning of August 24, 2017, Massachusetts Environmental Police Officers were patrolling the Cape Cod Canal in response to numerous complaints regarding striped bass violations.

Officers encounterd a high level of compliance; however, there were also numerous violations of individuals over the recreational limit. Officers observed violators loading their vehicles, hiding fish within the rocks and bushes, as well as filleting fish. Criminal summonses were issued to five individuals, several civil citations were issued as well.

A total of 332-pounds of striped bass were seized and subsequently donated to the New Bedford-area Salvation Army. A total of 16-pounds of fillets were seized, but due to their condition were found not suitable for human consumption and were ultimately destroyed. Fishing gear was seized as well.