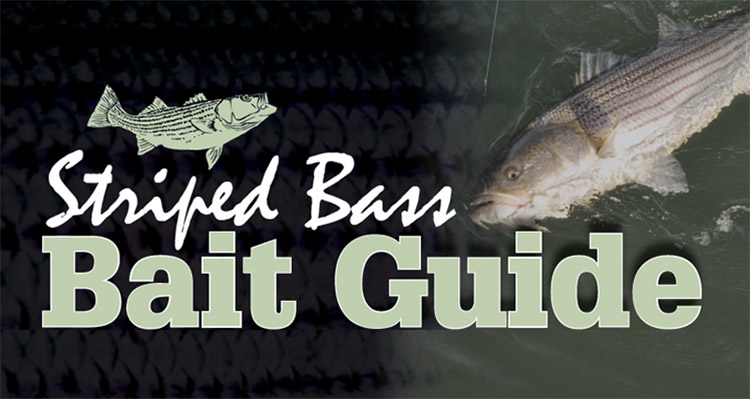 There are two species of seaworms that are popular among striper fishermen, the bloodworm and the sandworm. Both are dug from mud tidal flats in Maine, but they can be found throughout the Northeast.


The worms are similar in their appearance and effectiveness, yet there is a strong regional preference for bloodworms in southern New Jersey, while fishermen to the north prefer sandworms. Bloodworms hold the hook a bit better than sandworms, but both are relatively fragile.

For fishing these baits from shore, fishermen have the most luck using a two-hook rig like the Pompano Rig. Tied with short leaders and small baitholder or circle hooks, this rig is best fished on back-bay mud flats or sand beaches.

Years ago, slow-trolling sandworms on a worm harness from a small boat was the preferred tactic for catching early-season stripers in Long Island Sound. Though this technique has fallen out of favor with modern anglers, it’s no less effective today, and will account for big numbers of spring stripers.

The bizarre-looking tube-and-worm rig is a proven tactic for big stripers throughout the season. Tipping the tube with a piece of sandworm is the secret to the rig’s success as the scent of the worm seals the deal for stripers following the rig.

If you have leftover seaworms, place them on a bed of damp seaweed and put them in your refrigerator. They should keep for a week or so.

Protect Your Precious Baits
Every fish in the ocean will snatch up a fresh seaworm if given the chance. When white perch take over your spot and pick your hooks clean, try wrapping the worm in a red or white fine-mesh netting, as is done with salmon eggs for steelhead fishing. The seaworm will stay on the hook despite repeated attacks from the bait-stealers, giving a big bass plenty of time to find your bait. Though stripers can’t crack the shell of a full-size surf clam, when a storm does the cracking for them, they don’t hesitate to slurp down the gooey entrails. Clams are a very popular bait in New Jersey and on Long Island.

Clams are best used when fresh, bought in the shell at your local tackle shop. In the absence of fresh, salted clams are the next best, with frozen being a last resort.

Surf fishermen use clams along sandy beaches and inside mudbottom bays, especially early and late in the season. Boat fishermen anchor around back-bay structure and ladle out clam bellies to start a chum slick and bring the stripers right to the boat.

Bathe Them in Brine

At the end of your trip, if you won’t be getting out again soon, you can save your clam baits for a future outing by adding them to a kosher salt brine and placing them in the freezer. Be careful not to oversalt the clams or they will become rock-hard and useless as striper bait.

String Them Up
Fresh clams are soft and can easily tear off the hook during the cast. To prevent this unintentional chumming, wrap elastic thread around your clam bait after placing it on the hook. This will keep it inplace even when you need to add a little oomph to your cast to reach the back side of the bar.

Live or cut into chunks, bunker share the title of the best big-bass bait with eels.

Since dead bunker are easy to procure from bait shops, chunking is the most popular method for using this bait. Surf fishermen usually switch over from clams to bunker late in the springtime when larger stripers move in from southern waters. Boat fishermen chunk bunker throughout the season, anchoring up and doling out small pieces of baitfish while sending back a larger chunk or the head on a hook.

Live bunker are usually fished weightless with a large hook worked through the nose. In deeper waters, or areas with current, fishermen will rig the bunker on a three-way rig with a sinker to help it drop into the strike zone. Surf fishermen can use live bunker by employing a technique known as the “snag and drop,” whereby they cast a weighted treble hook into a school of bunker, snag a bait with long sweeps of the rod, and allow the bait to swim.

The weighted treble, and mortal wound, causes the struggling bunker to sink below the school where opportunistic stripers make a quick meal of it. Some fishermen frown upon this technique as it can lead to stripers being deep-hooked with a treble hook, but if fishermen set the hook at the first strike, the chances of a gut-hooked fish will be reduced dramatically.

Bunker are easily caught since they give their presence away by flipping on the surface. Boat fishermen can quickly acquire a day’s worth of bait by tossing a large, heavily weighted cast net over a school of bunker inside a bay or harbor. On the ocean, both shore and boat fishermen use weighted treble hooks cast into the school and snag the large baitfish.

Give Them A Trim
When live-lining bunker, you can help your bait stand out from the others by trimming the tail fin. The struggling bunker will sink below the school, where big stripers are waiting to pick off wounded baitfish.

Cutting a Bunker for Chunking

Head
A fine piece of bait when looking to weed out skates, dogfish, bluefish and smaller stripers in favor of large fish. Large stripers are accustomed to cleaning up the bunker heads left behind by marauding bluefish schools, and will rarely pass up this bait. Hook the head through the meat on the bunker’s “shoulder,” not through the nose or lips as you would with a live bunker. This allows the hook to tear through the softer flesh when you set the hook, allowing for a better set.

Prime Ribs
The next two cuts of bunker include the ribcage and viscera, and leave a potent scent trail the water. These are the best part of the bunker to use as bait when schoolies, skates and dogfish aren’t a nuisance.

Round
The last chunk of bunker is all meat. Some fishermen will use it as bait, especially for blues and smaller bass, but many prefer to cut this section into smaller pieces to toss over the side as chum.

Tail
Cut the tail off and toss it over. It has little value as bait or chum, and left on, will cause the final cut of bunker to spin while on the hook. Mackerel are one of the most popular live baits for striped bass north of Cape Cod. Fished weightless on a live-lining rig or under a float, fishermen use mackerel around rocky structure and shorelines. Slow-trolling with live mackerel is another popular technique for tempting large stripers. Dead mackerel are a great bait when chunked and fished on the bottom. Many bait and tackle shops will have frozen mackerel on hand throughout the season, making it a great backup bait when fresh pogies aren’t available.

If you want live macks, it’s on you to catch them. North of Cape Cod, mackerel can be found in large schools over inshore structure and in deep areas with some current. To catch them, drop a mackerel tree or Sabiki rig with a small diamond jig as the weight. You can draw them in and keep them around your boat by using chum.

The porgy is a favorite bait for fishermen seeking trophy stripers off eastern Long Island and in Long Island Sound. Summer stripers will hunt schools of porgies around reefs and other bottom structure, making them an effective bait to match the hatch.

Since no bait and tackle shops sell live porgies, you’ll have to catch them on your own before your trip. Usually, catching porgies with pieces of clam or squid is no problem; however, finding a perfect baitsize porgy that meets the minimum size limit (9 inches NJ; 10 inches NY), but is no more than 12 or so inches long can be difficult. Fortunately, the payoff when you find them is quick.

Porgies congregate over shallow structure such as a mussel bed or reef. Anchor over this structure and send out a chum pot filled with frozen clam chum. Lower a clam-baited high-low rig to the bottom, and the action should be immediate. Toss the bait-size porgy in the livewell, and when you have enough, head for the striper grounds.

Since fishermen target structure while fishing with scup, a three-way rig or fishfinder rig with enough weight to get the bait to the bottom is best. Once the rig hits bottom, take a few cranks of the reel handle so the live scup drifts past the structure just a few feet above it.

From the Cape May Rips to Montauk, eels are the go-to live bait for stripers because they are readily available at most tackle shops, are easy to keep alive, and big stripers can’t help but attack them.

No Tank, No Problem!

Three Bucket Eel System
With a few tools from the garage and three 5-gallon buckets picked up at your local hardware store, you can easily build one of these systems that will keep your eels alive and fresh for days. Drill holes into the bottoms of the top two buckets and leave the bottom one as-is. Then, as the diagram on the right shows, ice in the top, and eels in the middle. The melting ice will drip onto the eels, keeping them wet and cool, but the drain holes in the eel bucket prevent them from sitting in the ice water and suffocating.

Fish The Cigar
Big bluefish also have a fondness for eels, especially the tails, and will happily shorten your eel if given the chance. Before tossing away the “cigar stub” eel, give it a couple casts. Big stripers are notorious for making a meal of bluefish leftovers, and a surprising number of cow bass have fallen to bluefish-bitten eels.