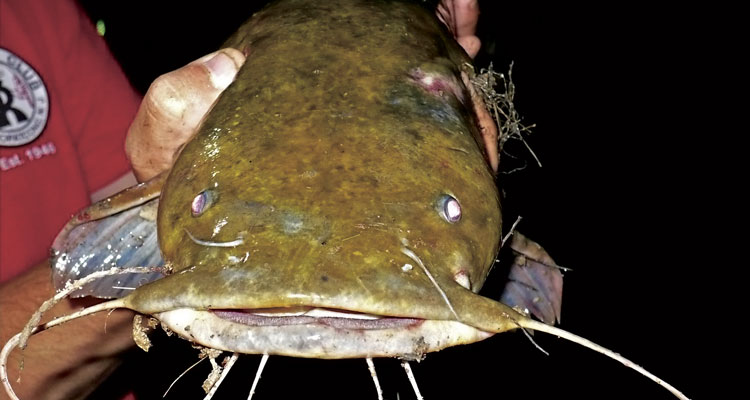 I can recall, almost to the day, when I became obsessed with catching catfish. These odd, whiskered bottom-dwellers didn’t appeal to many of my childhood friends, but they did to me. I’d already had some success catching bullheads and a few channel cats when I picked up the August 1991 issue of Field and Stream. There, on page 38, was a close-up of the mottled brown skin and massive gaping mouth of a flathead. I instantly became obsessed.

The article was written by Keith Sutton and titled, “The Big Ugly.” I’ve probably read it 40 times. The only problem was, at the time, there weren’t any of those fish in New Jersey. It took me over a decade to make my way South and, after a few failed attempts, catch one of these fish that swam through my dreams and nightmares. I started to catch a few flatheads when I made infrequent trips to Virginia and West Virginia, but these adventures were few and far between. However, over time, the flathead catfish found its way to me.

I vividly remember the moment I read that a flathead had been caught in New Jersey. The first two confirmed catches were in the Delaware River and D&R Canal, and they sounded some alarms. The flathead’s reputation for attaining a large size and eating everything in its way was certainly not welcomed in the Garden State. But, I guess that depends on who you asked.

Flathead catfish are not native to New Jersey; nor are they native to Eastern Pennsylvania and the Schuylkill River, where it is widely believed that they came from. How they got into the “Skuke” in such large numbers is not completely certain, but there has been a healthy population of reproducing fish there since the mid-90s. Flatheads are native to some Western Pennsylvania waters, but their presence in the Schuylkill is recent, and they are considered an invasive species.

Likewise, the flathead’s introduction into the Delaware River was unintentional. Their passage from the Schuylkill probably occurred sometime in the late 90s. In early 2000, New Jersey had its first confirmed catches. Although not abundant in the early 2000s, it became evident that the flatheads were growing in both numbers and size.

Mark Boriek, Principal Fisheries Biologist for NJ Fish and Wildlife, noted that three to four years ago, most catches were reported near Lambertville. However, in recent years, the water around Riegelsville has become the hotspot. Boriek also reported that flatheads have made their way to the Raritan River by using the D & R Canal. Furthermore, a confirmed catch of a juvenile flathead in the canal signaled that they are reproducing.

The flathead was immediately designated as an invasive species in the Delaware and all of New Jersey. Any fish caught should be eaten or destroyed, and not put back in the water. This rule continues to hold true today. Flathead catfish are voracious eaters and have been known to decimate populations of native fish in other parts of the country. Boriek noted that although no studies have been done on the flathead’s impact on native species, it is certainly a cause for concern.

Flatheads differ from other species of catfish in two key ways, and being aware of these will ultimately determine your success at catching them. Although catfish are known to be nocturnal feeders, most people know it’s very possible to catch blue cats, channel cats and bullheads during the day. This does not apply to the flathead, so targeting them before nightfall will often be a waste of time. There are occasions when muddy water or extremely overcast days will have them active during daylight hours, but don’t ever count on it. If you are serious about catching flatheads, break out the headlamp and the bug spray.

Most species of catfish have the reputation for being scavengers. Stink bait is practically synonymous with fishing for channel cats and almost all blue-cat fishermen use fresh, cut baits such as shad or menhaden. But if flatheads are your game, the bait needs to be moving, and the more movement the better. Flatheads are predators and prefer to eat something that is alive. Small- to medium-sized sunfish are a choice bait, but be sure to check local fishing regulations.

In Search of Shoreline

The Delaware River presents obstacles for both shore anglers and boat anglers alike. Having a boat is useful for covering more water and being able to find deep pools or holes. However, almost every angler who regularly fishes the Delaware uses a jet drive. With water levels likely to be lower during the summer months, having a prop or lacking detailed knowledge of the river will make fishing difficult…and dangerous.

Most people who target flatheads in the Delaware River do so from shore, and this is where a little research can go a long way. It took me a while to find a solid stretch of shoreline to fish, but once I did, the hard part was done. Talking to local bait shop owners and taking short daytime hikes will pay dividends. If you have some time to scout spots, then do so. Google Maps can also reveal open stretches of the riverbank suitable for fishing.

And, pay attention to two things: location and depth. Although flatheads have been caught from the tidal part of the Delaware to the Water Gap and north, most reports come from Riegelsville to Lambertville. Depth is the second key factor, so fish adjacent to deeper water. (Some contour maps of the river can be found online.) You can also take a few casts with a small weight or depth sounder to figure out if you’re in 2 feet of water or 20.

Tackle for catching flatheads need not be sophisticated or expensive, but it does have to meet a few basic requirements. Spinning or casting gear can be employed, with the latter being preferable. If you’re going to use spinning reels, a baitfeeder reel is preferable. You can also loosen the drag on a standard spinning reel to allow the flathead to run with the bait, but it can be tricky to get a solid hookset and tighten the drag with a fish on. If you’re using a casting reel, it should have a “clicker” on it for the same purpose.

Line is another topic worth talking about. You can undoubtedly get away with 20- to 30-pound monofilament line, which will get the job done at a reasonable price. If you prefer braid for added strength and casting distance, there are a couple things to consider. First, lighter braid is more difficult to manage with heavier baits and tackle. And, should you happen to get a bird’s nest, picking 20- or 30-pound-test braid apart in the dark can be a nightmare. I recommend beefing up your line to 50-pound test, 65-pound test, or even heavier. If you are going to use braid as a mainline, add a length of heavier monofilament or fluorocarbon to protect against abrasion. Even the heaviest braid can be sliced like butter against a rock when under stress. Fluorocarbon is much more abrasion resistant than mono, and you can use between 20- and 30-pound test. Attach it to your mainline with an FG or Alberto knot so it slides easily through the guides. If using mono or fluoro line, you can skip this part.

The final step is your rig, which should consist of a sliding sinker, bead, heavy barrel swivel, strong leader and strong hook. First, slide your lead on the mainline (or the stretch of shock leader you’ve added if fishing with braid). Egg sinkers are traditionally used for slip-sinker rigs, but “no-roll” sinkers have become the go-to among the catfishing community. These flat sinkers will plant firmly on the river bottom and not move with the current. After the sinker, it’s beneficial to put on a small plastic bead to stop the sinker from pushing directly against the knot. The lead will weaken the line and knot after numerous casts and fish.

When I use slip sinkers, I prefer a very short leader. For catfish, I use less than a foot, and for carp I use as short as 5 or 6 inches. A big piece of bait and a heavy piece of lead with two feet of leader in between them can helicopter on the cast, costing you distance and causing potential tangling. A short leader will give you much better control of what your bait is doing at the bottom. Even with a taut line, a live bluegill is going to be able to swim naturally on a short leader, and you’ll also get a better hookset. And, if you think a flathead is going to be wary with its meal being so close to the hardware, I can assure you it isn’t a problem.