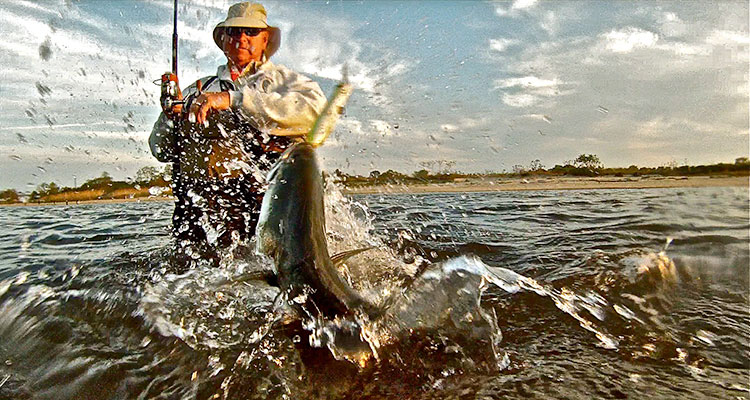 Hungry from the winter, spring bluefish strike topwater plugs with such ferocity that the action often carries the hooked fish right into the air as it somersaults, tail-walks and high-jumps like a tarpon. These hard-fighting, toothy gamefish are the perfect way to kick off the surf-fishing season.

In late April, blues from 3 to 20 pounds arrive in New Jersey waters. Springtime slammers infiltrate the surf and bays, and will remain abundant through June. Bluefish travel in groups ranging from small wolf packs to large schools; schools tend to be comprised of fish in a similar size class. Bluefish are cannibalistic, and a 10-pounder will happily devour a 3-pounder, given the chance.

An 8-foot or 9-foot plugging rod, rated for ¾- to 3-ounce lures is well-suited for blues in the 5- to 10-pound range. Pair the rod with a quality spinning reel spooled with 20- or 30-pound-test braided line. With bluefish running 10 pounds and larger (or when a long cast is needed) consider a 10- to 11-foot surf rod, which can be paired with a reel loaded with 40- or 50-pound braid. Surf rods from St. Croix, CTS, Lamiglas, Century, Seeker and Daiwa are great for working lures and subduing feisty bluefish. A local tackle shop can help you choose an optimal setup.

Despite the sharp teeth of a bluefish, metal leaders are not necessary. Heavy monofilament of 80-pound-test is strong enough to withstand a blue’s bite, but be sure to check leaders and line for damage after hookups. Leader length will be dictated by casting conditions. Three feet is a good length if casting from shore or wading in shallow water. If wading in deeper water, shorten the leader to keep your backcast from hitting the water.

Outfit bluefish plugs with a single barbless tail hook and remove belly hooks. If using treble hooks, crush the barbs, as barbless hooks allow for easy releases. Bluefish thrash wildly when handled, and any swinging hooks threaten to stick the fisherman. Barbless hooks are safer for both angler and fish.

Fishing barbless hooks demands concentration when fighting the fish. Slack line will allow the bluefish to throw the hook, especially when the fish jumps and shakes its head.

Bluefish can show up anywhere along the entire New Jersey coastline in April. Blitzes can occur, with diving gulls pointing to the epicenter of the blitz. Gulls feed on the scraps of wounded baitfish, which will commonly hurl themselves onto dry sand rather than face the rampaging bluefish. Blitzes are exciting, but word spreads quickly, drawing crowds. Fortunately, bluefish often feed over a wide area, so anglers can move well away from crowds and still catch fish.

Anglers can improve their odds of finding surf blues by looking for signs of feeding fish. While flocks of diving birds are an obvious indicator, there are more subtle signs as well. Individual gulls hovering over the water can be a sign of feeding bluefish. A single splash can also mark a major school feeding below the surface, even without any accompanying bird play. One of the best days of gator bluefish action at Island Beach State Park had no bird activity at all.

Disturbed surface water or dark blotches below the surface can indicate the presence of baitfish. Work plugs in and around the bait, and the bluefish will eventually show up. If bait is getting attacked by blues, the baitfish will frequently break the surface to avoid a bluefish’s snapping jaws, making them easy to identify.

Bluefish move up and down the beach quickly when they are hunting. They will travel through cuts in sandbars, along both edges of barrier bars, and venture into holes searching for food. If neither birds nor breaks are tipping you off to the blues’ location, concentrate on these structures to intercept hunting bluefish.

Surfcasters seeking bluefish should have a variety of topwater lures in their plug bags. If the blues are far out or are feeding on bunker or herring, bottleneck-style poppers can be effective. The Super Strike Little Neck Poppers cast like bullets and make a big commotion when retrieved. The sinking version of this plug offers added weight for long casting. Make sure to work the plug so that it pops water as it is retrieved. Other effective plugs in this style are the Gibbs Wooden Polaris Popper and Muccie’s Glitter Plug.

Fish pencil poppers for blues the same way you would for stripers—the plug’s nose whipping back and forth, causing a ruckus on the surface. Slowly retrieve the pencil, reeling only to pick up slack line. A very popular bluefish pencil is Guides Secret Poppa Pencil, which casts far, has a great action, and its plastic construction can take a beating. Lex Lures, Gibbs, Muccie and Big Ed’s Custom Lures also offer fine pencils at a bluefish-friendly price.

Metal-lip swimmers can score when gators are lurking tight to the beach, especially when they are keyed in on bunker. Watching a bluefish stalk the swimmer before hitting is exciting. Be sure to test your bluefish swimmers to make sure they swim correctly after you remove the belly hooks.

Subsurface presentations also draw strikes from the surf-running bluefish; some days, metal is the only lure that blues will hit. Lures like the Ava jig, Hopkins No=Eql, Deadly Dick, AOK T-Hex, Jetty Ghost and Kastmasters are effective. Soft-plastic baits will catch bluefish as well, but they are easily destroyed by the blues’ sharp teeth. Bucktails outfitted with twister tails are another solid option.

Gin-clear water creates the opportunity to sight-fish for bluefish. Legendary fly-fisherman Bob Popovics, a master at sight-fishing in the surf says, “Sight-fishing is an interactive method of fishing. It’s the most challenging fishing I know. Most exciting too. It’s all visual, as you never cast until a fish is spotted”. Popovics teaches scanning the waves, looking for fish, while standing up on the berm a way back from the waterline. He teaches to focus on the lower part of the breaking wave, which allows you to peer deep into the subsurface environment. Popovics notes “Presentation is most important, and accurate casting is key. You must entice a strike with an effective retrieve by watching and reacting to a fish’s body language.” White bucktails can be very effective in these situations. In addition, polarized glasses are a must for sight fishing.

Springtime also brings world-class topwater bluefish action to the bays of New Jersey. There are many miles of flats on the bayside, and many of them hold gator bluefish.
The big bluefish bite in the bay normally runs from mid-April until June, and northern areas tend to light up first. John Gillis, a veteran angler with over a decade of northern New Jersey bayshore fishing experience, says bluefish will show up in mid- to late April to gorge on bunker and herring. A water temperature of 55 degrees seems to be a catalyst for gator action.

Many anglers favor the wind blowing in their faces, but windless or offshore days can also be filled with action. Some of the most exciting days on the bay can be dead still, but bluefish will still be stalking plugs.

Bay bluefish weigh from 3 to 20 pounds, and it’s possible to encounter the entire range of sizes during a single outing. A school of 3-pound fish can suddenly give way to a school of 5- to 8-pound fish, which move out only after the 10- to 15-pound-plus bluefish show up. To avoid being eaten, smaller blues flee when larger fish move in.

Fishing in a bay sometimes involves wading over flats, though this can be dangerous affair. A few years ago, I waded far onto the flats and lazily decided to fish a pencil popper with two barbed treble hooks. On my first cast, I hooked a massive blue. After a lengthy fight, waged in stomach-deep water, I reeled the fish in close, where it repeatedly charged at me, menacingly. When I tried to grab the plug, the fish repeatedly lunged at my hand—it was downright nasty. Removing the treble was a nerve-wracking experience as the fish did not calm down and my undersized pliers left my fingers dangerously close to the gator’s chomping teeth. After a long struggle, I managed to remove the plug, and release the brute back into the bay.

Dealing with big, psychotic fish and barbed hooks in waist-deep water is a recipe for a trip to the ER. Ideally, plugs should have a single barbless tail hook; if trebles are employed, crush the barbs. Needle-nose pliers, measuring over 10 inches and attached to a lanyard, are critical for hook removal, and a lip-gripper will help control agitated fish. 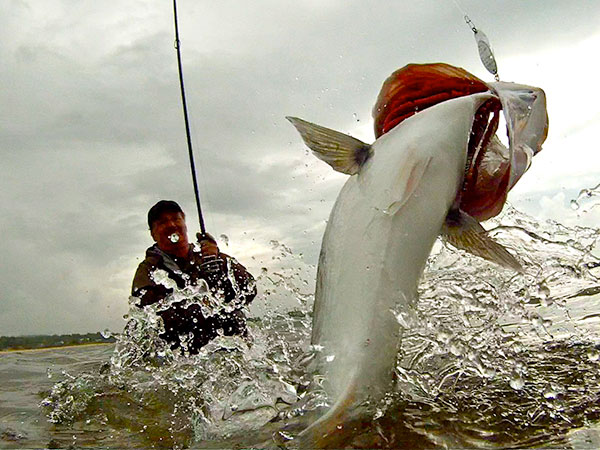 Another safety issue, pointed out by John Gillis, is “snap back,” when the fish shakes free of the plug at close range and it rockets directly back at the angler. When landing a bluefish, it is best to angle rods off to the side so the trajectory of a flying plug is away from the fisherman.

Bluefish can be caught during both tide phases in the bay. Anglers can fish high tide or deep water spots from the shore. Lower tides generally require wading out to reach productive water; however, fish will occasionally invade flats tight to the shore. Anglers fishing a dropping tide can advance with the dropping water, working topwater plugs as they move farther from shore. Fishermen should start working back toward shore when the tide turns as the water can rise quickly and overtake the top of waders. Also, beware of holes or dips on the bay floor, which can turn a wade into a swim.

Springtime bluefish will occasionally swim lazily on the surface in tight schools with their tails sticking out of the water. These exposed tails look like a flotilla of little black sailboats. When “tailing” or “finning,” these bluefish tend to ignore plugs. However, when tailing blues sound, the action can quickly turn on.

Common baitfish in New Jersey’s bays in spring are bunker, herring and large spearing. Most often, there will be no sign of fish or bait in the area. Anglers should cast topwater plugs and occasionally change lures until a strike occurs.

A typical arsenal of topwater plugs should cover a range of sizes and shapes for targeting bay bluefish. Bay water is often tinged, so yellow, chartreuse, white and orange are popular lure colors.

Large pencil poppers can be extremely effective for gator blues in the bay. Many bay anglers work pencils by skipping them across the surface, rather than using the traditional walking-style pencil popper retrieve employed in the surf. The retrieve is generally quite fast, and the pencil will move headfirst along the surface, occasionally diving a couple of inches down.

Tsunami Talkin’ Poppers are a tremendous popper for the bay, especially in the “Electro School Bus” color. These inexpensive poppers can be worked in a fairly quick, chugging manner.

Roberts “Ranger” plugs are designed for catching bluefish. They feature a lone tail hook, so they are a quick barb-crimp away from being gator-ready. Rangers can be skittered across the surface at a moderate speed. The Gag’s Grabber Bluefish Bomb is another bluefish-specific plug that works well.
Wide profile metals, such as Hopkins, Halcos and Kastmasters can produce, but they lack the excitement associated with topwater strikes. However, just like in the surf, sometimes metal is the only lures that bluefish will hit.

Gator blues will be soon be terrorizing baitfish along the Jersey shoreline, and the bays and surf zone will produce tremendous topwater action. These hard-fighting gamefish are sure to get you’re your blood flowing after a long, cold winter.