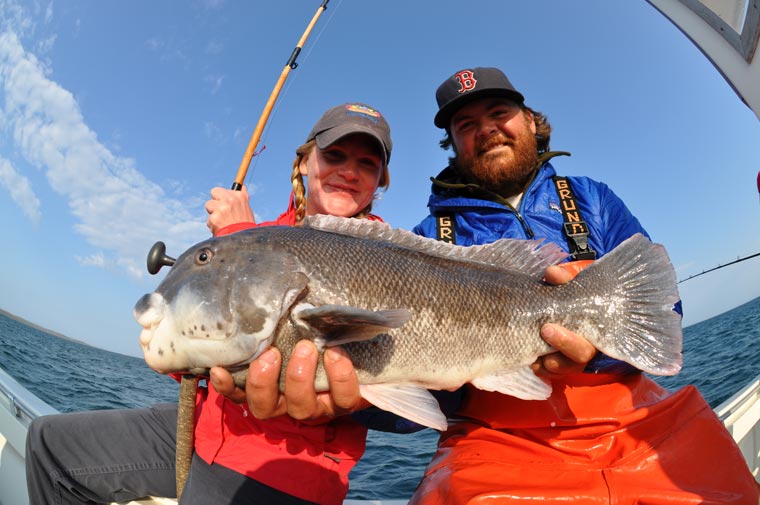 It wasn’t long ago that tautog were only sought by recreational fishermen and were paid very little attention by commercial fishermen. Even the recreational crowd never gave them the attention that was given to stripers and bluefish, or even fluke and flounder. Things changed when it was determined that a demand existed for live tautog in foreign markets, and commercial fishermen began targeting the fish. Stocks were soon heavily impacted and state and federal fisheries officials took action, establishing size and bag limits.

Tautog, also known as blackfish in southern New England, take a longer time to reach sexual maturity than many other fish sought for their food value, and taking too many of them before they have a chance to spawn had very serious implications for the species and catches plummeted. After the tougher regulations were put into place, the fish began to rebound, not to the numbers of 20 or 25 years ago, but at least they were beginning to show on the many rockpiles and reefs where they had been caught for decades.

In southern New England, we are blessed with many excellent blackfish areas that are accessible to almost everyone. You don’t need an expensive offshore rig or even a dinghy, because they can be taken from shore just as readily as from a boat. So before we begin to discuss fishing spots, let’s first look at some of the reasons these not-so-pretty fish have become so popular with anglers. First, it’s because of the way they come out of the oven–delicious. The meat is white, firm and has a special sweetness to it. Those who have never had the pleasure of sampling tautog right out of the oven have no idea of what they are missing.

Secondly, they are a ton of fun to catch and can put up a battle that few bottom dwellers can equal. Pound for pound they can hold their own with just about anything that swims, in terms of pure strength. When they feel the hook, they immediately head for the cover of rocks, or bull their way back among pilings or any other structure that’s available. Although they don’t make the head-shaking, line-burning runs of some sportfish, their dogged determination to stay on the bottom can easily overmatch fishing gear designed for a lesser opponent.

If by chance you have never seen one, it’s a creature that has a look all its own. The first thing you’ll notice is that it’s slimy, very slimy. That’s why most fishermen hang them over the side of the boat in a burlap bag or fish bag, so to avoid a big mess in their boat. Its color is almost all black on the top, tapering to a light gray, with all white underneath. Its shoulders will remind you proportionately of a pro lineman who could start for the Patriots. The tautog’s face looks like it was pushed into a moving train on purpose, and it sports a set of teeth that are designed to crush clams, mussels, crabs and anything else it can dig out of the crevices along the bottom. Once you catch one, you will know right away what you have.

For years it’s been an accepted rule of thumb that when the first dandelions appear in the spring, it’s time to start fishing for tautog in local rockpiles. I have a neighbor who watches for those pesky weeds, and when they appear, his spring ritual of catching these fine gamesters begins. He hasn’t been skunked in over 10 years, so there must be something to it.

The only requirement to finding tautog is an area with plenty of rocks. The more rocks, the better. Wrecks and piers also hold good populations of fish. This is where a high-quality graph recorder or digital depth finder comes in handy, if you are fishing from a boat and especially if you also have a GPS. These devices make finding and storing those better locations a lot easier and faster. From shore, just stick to the more rocky area of the coastline, as tautog will hang in close to pilings, shallow-water reefs, boulder fields and shellfish beds. Long casts won’t be necessary if you fish the right areas.

There is one hard-and-fast rule in fishing for blackfish from either a boat or from shore. If you can’t feel the rocks or you are not losing sinkers and rigs, then you just aren’t blackfishing, plain and simple. I once tried a ritual. I took a few sinkers down to my favorite tautog fishing spot and threw them in with the hope that the fishing gods would be satisfied and let me make at least one trip without losing terminal tackle. Of course it didn’t work, but hey, it was worth a try, right?

It has long been believed that when tautog develop a soft membrane around the outside of their mouths in the spring of the year, that the red area is skin being shed in place of tougher skin, and the fish only eat sandworms or other soft foods during this time. Many fishermen now feel that the red skin is likely caused by feeding heavily during the winter among rocks and barnacles, because even though blackfish will eat a worm if it’s handy, they are just as likely to go for a split green crab.

Tautog will take up residence on a reef and stick very close to one particular area of it. Good cover and the availability of food probably account for this trait. That’s one reason why boat fishermen who chum can sometimes seem to have every blackfish in the area under their boat, while just a few feet away you can’t even get a nibble.

Tautog are very rarely taken at night. This is because they rest and go into a semideep sleep, moving very, very little. Days that are bright and sunny are better than ones that are cloudy and overcast. Tautog will begin to feed at first light, so an early start won’t hurt in getting to your favorite blackfish hole.

These fish are gregarious and will mass together when feeding–once you catch one from either shore or boat, you will probably find more in the same spot. If all you catch is one or two fish after a reasonable amount of time, pack up and move to another location because chances are there aren’t any more in that area.

Their diet consists of many different things: crabs, seaworms, fiddlers, clams and mussels, but if the pickings are slim, they’ll even pick barnacles off rocks with their strong teeth. The best bait I’d have to say is a toss-up between green crabs and mussels, with seaworms bringing up third spot. Mussels make up a larger portion of the fish’s diet. They will graze a musselbed until they have virtually cleaned it out and then move onto another area.

Crabs are best fished in either halves or smaller pieces. Some will say that to use them whole, or whole with no legs or claws, is best, and there are more variations. I have the best success with pieces.

Mussels can also be used, but they are tough to keep on the hook. I’ve tried opening them partway, inserting the hook leaving the point exposed and tying it back on using black thread. If you’re fishing from a boat, depending on the conditions, this can be very frustrating experience, but when you finally get the mussels to stay on, they make great bait. I learned this trick from an old-timer friend of mine. He had the process down to a science, and one thing was for sure, he caught fish! The only thing I ever saw him use were whole mussels, about 2 inches in length. I’ve watched him send guys home talking to themselves at the end of the day.

In spite of their strong jaws and prominent chompers, tautog almost always hit the baits softly. Always wait a bit when you feel a bite, and don’t haul back and set the hook too soon. Most fish are lost or not hooked by anglers who set the hook too quickly or don’t give the fish time to get the bait into their mouths.

Your tackle for blackfishing from shore should be fairly stout. I like conventional type gear for this type of fishing. A good setup is a 9- or 10-foot surf rod capable of handling 4 to 6 ounces of lead and bait, along with a Penn 975 International or a Penn Squidder casting reel with 25- or 30-pound-test mono. The heavier mono is needed because you’ll be fishing around rocks, but don’t go too heavy with the mono, as it will be harder to break off your terminal tackle if you hang up on the bottom.

Before you leave for your outing be sure you have plenty of sinkers and hooks because you will certainly need them. In the course of a day it’s nothing to go through a dozen or so rigs. I tie mine the night before, maybe a couple dozen or so to save time when down by the water. I also use as little terminal gear as possible. Black size 4 or size 2 tautog hooks, either snelled or tied directly to the line, are best. If you prefer pre-snelled hooks and have to use snap swivels, make sure you spray-paint brass ones with black paint or use black ones to begin with. Attach your sinkers with a dropper of 12-pound-test mono. Usually this will break before the heavier running line, and you will only need to replace your sinker and not re-tie the whole rig.

Tautog have made a decent comeback with more stringent regulations. Once thought of as little more than a large cunner, more and more fishermen are discovering that blackfish are a worthy adversary and taste delicious, too.