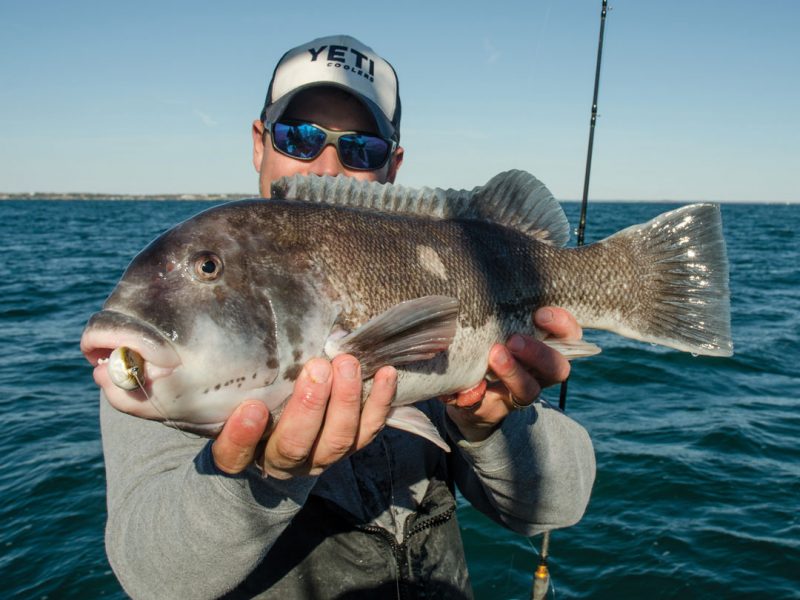 While pushing the lawnmower through its second tour of the yard in spring 2020, I was lost in thought, wondering which pond to fish following the requisite Saturday yardwork, when a splash of yellow caught my eye. There, directly in the path of the lawnmower, the first dandelion of spring stood above the green blades of grass. I stopped for a moment, pondered what it meant, and mowed it down while forming a new plan for the afternoon’s fishing.

Bygone fishermen planned their seasons according to nature’s signals, not the Gregorian calendar. Watermen in southern New Jersey knew that when the dogwoods were blooming, drum were in Delaware Bay. Settlers along large, coastal rivers watched the shadbush for when to drop their nets for, well, shad, and when old salts in southern New England saw dandelions in bloom, they knew tautog were back in town.


With the lawn mowed and the smell of freshly cut grass wafting over my yard, I called Evan at Eastman’s Sport and Tackle and asked, “Do you have green crabs in stock?”

Most anglers associate tog fishing with the fall. When the stripers have departed, anglers turn to tog for their last licks at the saltwater season. While many await the return of the stripers to migrate back to the salt themselves, it’s actually the tog that kick off the spring fishing festivities, and Massachusetts, Rhode Island, and Connecticut all have spring tog seasons that begin on the first of April.

Tog don’t migrate as far as striped bass or blues in the winter. They’ll ride out the cold on structure in 100 to 150 feet of water, perhaps as far as 30 miles offshore. So, it doesn’t take nearly as long for tog to swim back within range of small boats, kayaks, or even shore fishermen.

With a quart of green crabs and the afternoon off, I pedaled my kayak to a rock pile situated in 35 feet of water. I’d brought two rods, one with a jig and another with a single-hook rig. Early in the season, when the water temperature is still in the 40s, tog can be finicky. When the water warms, I usually skip bringing the rigs, but in the cold water, the rigs seem better at coaxing blackfish to bite.

I had to reposition the kayak a few times before I found (or, rather, felt) the first signs of life. The bites were disinterested scratches. I let them go on for 30 seconds or more, waiting for a more committed thump before swinging the rod and hoping for the best. I reeled up my halved green crab to find the tender vittles had been scraped clean, leaving a nearly empty shell. I did finally get a hook into one, an undersized tog that confirmed it was indeed blackfish scratching at my crabs.

The trip reminded me of another old fisherman’s tale about tautog, that in the springtime, the tog’s lips are tender and they prefer soft baits over crabs. While I abide by the dandelion-tog connection, the “tender lips” folklore I’ve filed away with myths like pike losing their teeth in the summertime. The tog’s apparent preference for soft baits in the early spring probably has more to do with their metabolism in the colder water. Tog will eat soft baits throughout the season, but any later than the early spring, there are usually far too many bait-stealing species like scup, sea bass, and bergall to make clams and seaworms feasible baits for blackfish.

Fortunately for me, the shops had begun stocking seaworms in addition to green crabs, and the following weekend, I was back over the rock pile, getting more decisive bites from the blackfish below. I fished the seaworms on a simple, one-hook tog setup called the Belmar rig. It became popular on headboats sailing from Belmar, New Jersey, a hub of angling activity in the northern half of the Garden State’s coast. The rig was favored because it could be quickly retied when tackle was lost to the structure below.

To make a Belmar rig, start by making a few short leaders with a hook snelled to one end and a perfection loop at the other. Have a half-dozen hooks rigged this way on 6- to 8-inch leaders of 30- to 40-pound test. Next, take the monofilament or fluorocarbon topshot you’ve attached to your braided line with a double-Uni or FG knot, and make a long surgeon’s loop at the bottom. (The loop itself should be 12 to 14 inches long.) Loop a bank sinker onto the bottom, and then do a loop-to-loop connection using the perfection loop of one of your snelled hooks. Make two overhand knots around the perfection loop with your sinker to lock the hook leader into place, and you’re ready to fish. The rig itself takes less time to tie than the above instructions take to read.

With half a seaworm threaded onto the small, short-shank “live bait” hook, I caught a few 12- to 14-inchers before a larger fish put a U-bend into my spinning rod. It was the best fight I’d had since my final tog the December before—a blackfish, digging for bottom, can pull the scales off any fish in fresh water, even a smallmouth bass. It doesn’t take a massive tog to give you good fight either. That fish was 17 inches, by no one’s standards a trophy, but it was still a keeper. I unhooked and bled the fish, then put it in the box. 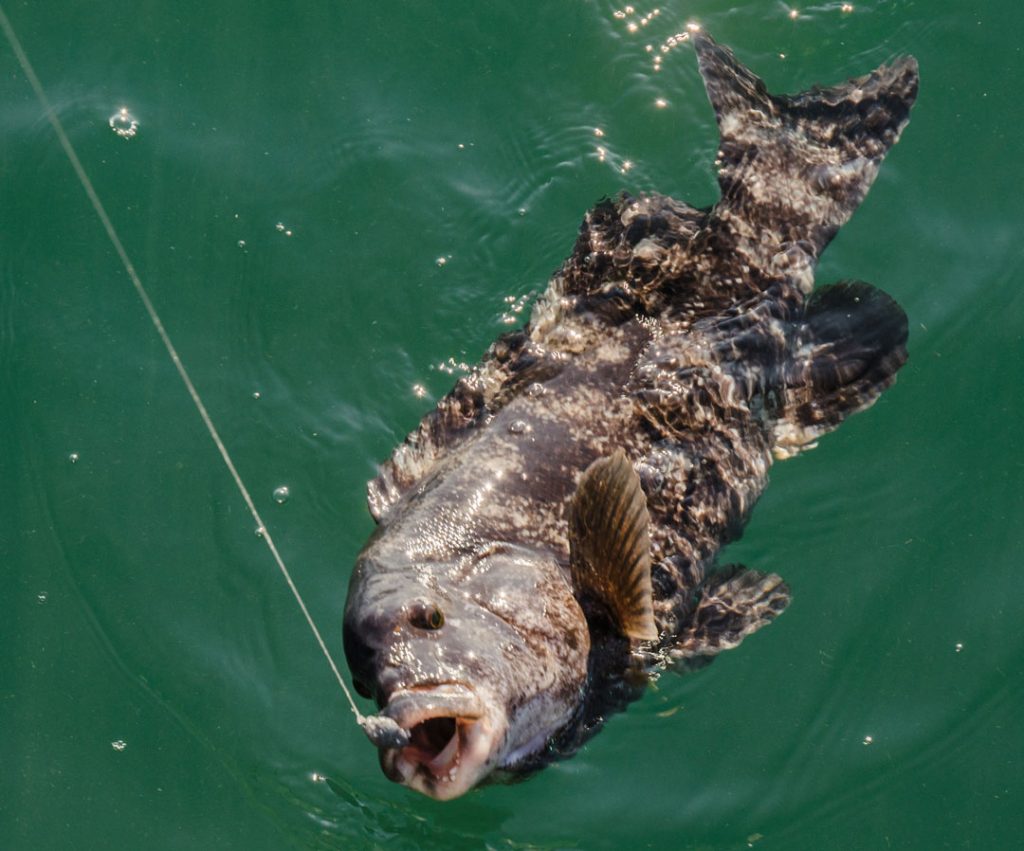 I used my last tog fillets from the previous year to make chowder. I froze some of it into serving-size blocks and treated myself to a steaming bowl periodically through the winter. It had run out sometime in early March, and I was tempted to take that first keeper blackfish and go through the chowder-making process all over again, but with spring approaching full bloom, fish tacos felt more seasonally appropriate.

Blackened and served on a corn tortilla with a squeeze of lime juice and the usual fixings of cilantro, shredded cabbage, and cotija cheese, a blackfish taco is a perfect meal to welcome the start of the saltwater season. Like spring itself, a good fish taco is light, colorful, aromatic, and gone too quickly.

Tog fishing improves and the fish move shallower and closer to shore through April and into May (where the season remains open). By the middle of May, tog begin moving into bays, and you’ll begin to notice bulging bellies on the female fish, and some of the males may be dropping milt when you catch them. If you see this happening, it’s time to rack the tog rigs until fall. Since it’s fairly easy to distinguish female tog from male tog, I typically release any keeper-sized females I catch during the spring season. With tog being slow to grow and mature, I feel better about releasing the females when they are just weeks away from dropping their eggs.

By the time tog are getting ready to spawn, the stripers are so abundant that they will no longer be ignored. As much as I love catching tog, that love is tested when I have to cruise past breaking stripers on my way to the tog spots. At the end of the spring tog season, the dandelions lose their significance until the following April. when once again, I’ll take my saltwater fishing cues from the front lawn.