Figuring out the timing of the spring striper migration will help improve your success.

Finding stripers during the spring migration can be a challenge as the fish are on the move and often cover long distances in short periods of time. To level the playing field, it’s a wise idea to create a plan and execute it to increase the overall odds of finding and catching bass during the striper migration. A proven method is to strategically intercept stripers on their way up the Atlantic coast by taking the time to learn the areas where they stage and the chokepoints within those locations.

Why do stripers stage?

Staging simply describes when striped bass remain in one area for a period of time. Often, “staging” fish are taking advantage of optimal conditions to feed in a specific location. Strong water movement, comfortable water temperatures, robust concentrations of bait, strong tides, wind direction, and other factors contribute to where they stop to feed.

What is a chokepoint?

A chokepoint is a narrow area where stripers pass through on their way to reach another location. A prime example of a chokepoint is Buzzards Bay and the Cape Cod Canal, a narrow passageway with large volumes of water moving key nutrients and baitfish, making it one of the best spring striper fishing locations in New England.

When stripers are moving during the migration, they’re difficult to stay on top of. You can increase your odds by fishing areas where large numbers of striped bass gather. Bays and rivers have the largest concentrations of stripers in the spring, making it possible for shore, kayak, and boat anglers to take part in the action. The following 7 locations are well known for producing large numbers of bass and also big fish. 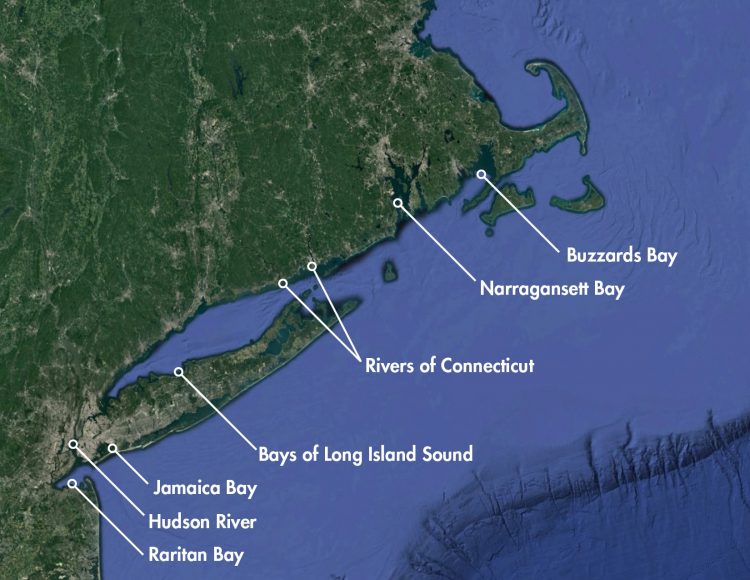 The first major stop on the spring striper migration for bass that will eventually spawn in the Hudson River is Raritan Bay, where thousands of stripers stage to feed before they enter the Hudson.

Bass from 20 inches to 20 pounds and larger slide onto the shallow Raritan Bay flats in late March and early April, staging until the water temperatures are optimal for spawning in the Hudson.

Jamaica Bay in New York plays a large part in the spring striper migration for two reasons: its proximity to the mouth of the Hudson River and because it offers two things that migrating striped bass seek out in spring, warmer water, and abundant food.

J-Bay as some call it, sits on the western tip of Long Island, directly south of Brooklyn and Queens. It offers 10,000 acres of prime striper fishing in late April and May.

Spring striper fishing begins to pick up in western Long Island Sound in April as shallow backwaters warm and schoolie striped bass get active. As the migration progresses, more bass will move in and there is even the chance for large Hudson River spawning-size bass to stage in bays and harbors to feed either before or after spawning.

The Hudson River is one of the best spring striper fishing spots because it hosts the second-largest spawning population. When stripers head north up the Hudson to spawn, they cross paths with schools of herring, creating surface feeds at bridges, shallow flats, and gravel bars.

Their primary spawning range in the Hudson is from Croton Point in Westchester County to Catskill, Green County.

After spawning, stripers exit the Hudson and have the option to take one of two routes:

The Housatonic, Connecticut, and Thames rivers are pit stops for stripers on their migration to New England. In May and June, holdover stripers and migrating bass from the Chesapeake Bay and the Hudson River intersect with bunker and herring, creating some of the best fishing in the Northeast.

The Housatonic River has one of the largest holdover striper populations in the Northeast, making it a popular destination when bass become more active in April and early May. As water temperatures start to climb in the Housy, stripers search for food, making them an easy target for shore anglers.

Connecticut River fishing in the middle and upper stretches starts picking up in late April when the water temperatures climb into the low 50s.

The lower part of the River has consistent schoolie action all throughout May. As June approaches, migrating stripers move into the lower river, searching for schools of bunker to feed on.

The spring striper run in Narragansett Bay starts to take off when water temperatures hit 52 degrees. Larger fish arrive in late May and the fishing peaks during the moon cycles of June.

Narragansett is similar to the run in the Connecticut River, in particular, because pods of bait (mainly bunker, but also herring and squid) collide with migrating bass, creating great fishing until water temperatures in the upper bay get too warm. Bass will continue to move in and out of the bay entrance in early July, especially when cooler water flushes into the bay on an incoming tide.

The waters of Buzzards Bay play an important role in the spring striper migration because the Bay is a natural funnel for fish moving north through the Cape Cod Canal, an obvious chokepoint.

Northbound swimming stripers have two options when migrating to their summer grounds: swim through the narrow 7 mile stretch of the Cape Cod Canal and into Cape Cod Bay, or take the long route around the outer Cape.

The first run of large stripers will push through the Canal sometime around Memorial Day Weekend and fish will continue moving through well into June. The Canal will also often host striper blitzes as incoming tides from Cape Cod Bay bring in bait and cooler water.