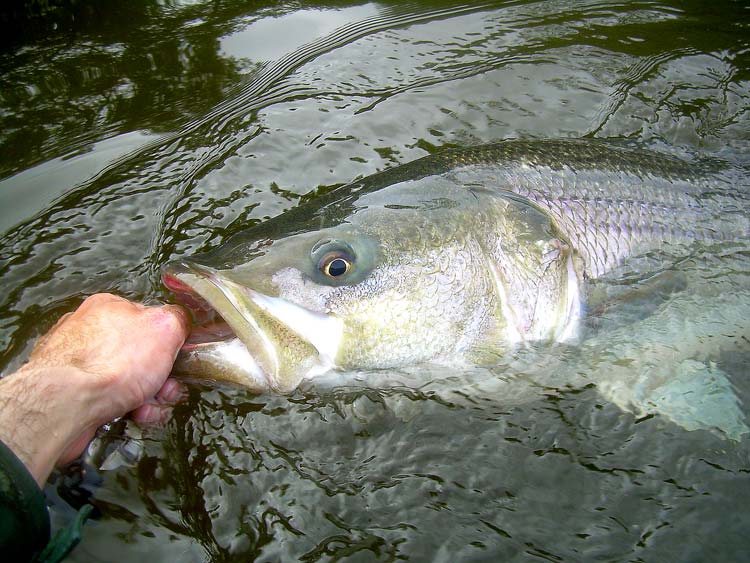 Why do I love springtime fishing on the Connecticut River? Imagine drifting quietly through a calm, tree-lined stretch of shallow water, casting a topwater plug toward shore and rhythmically working it back toward your boat while a bald eagle watches from a treetop. The only sound is the quiet splish-splashing of the plug as it zigzags along the surface—left, right, left, right, left—and then suddenly the plug disappears in a small explosion of whitewater and the silence of the river is replaced by the noise of your spinning reel’s screaming drag. I have been fortunate to partake in this fishery for the last 14 years, and light tackle only adds to the excitement.

The Connecticut River is a very unique river system. The state itself takes its name from the river, which is an adaptation of an Algonquin word meaning “long tidal river.” As its name reflects, there is a tidal influence extending about 50 miles inland. The Connecticut River watershed extends all the way into Canada, so during the spring the river will often flood due to rain and snowmelt to the north. Stripers range from the mouth of the Connecticut up to the Holyoke Dam in Massachusetts. They can be found in the river year round, but the prime season begins in mid-May and extends into early June.

I typically fish the Middletown to Hartford stretch of the river. It is a very navigable section that is entirely fresh water. Large barges do travel this section because the channel averages around 20 feet deep; however, the channel does not necessarily run down the middle of the river and there are many shallow areas, so pay attention to the marker buoys. If you look at a chart, you will notice the river has a lot of turns that provide good current breaks. Some sections are sandy, others are rocky and some are a mud/silt mix. The shoreline is mostly wooded and picturesque, especially in the fall. This section of the river is diverse, and if the striped bass are not cooperating, you can target northern pike and largemouth bass in basically the same areas, with similar lures. As the water warms through mid-June, the striper fishing on the Connecticut River shifts toward the mouth, where there is greater influence from Long Island Sound, which delivers cool water and baitfish.

You can access the river and work your way north from public boat launches at the Baldwin Bridge in Old Saybrook, Salmon River in East Haddam, Haddam Meadows in Haddam, and Bissell Bridge in Hartford.

The key to the spring striper fishery is baitfish. American shad, alewives, and blueback herring are the three main baitfish that draw spring stripers up into the Connecticut River. They are all anadromous, meaning that they migrate from the ocean to fresh water to spawn. (Note that the possession of alewives and blueback herring, collectively known as river herring, is prohibited in Connecticut, as their numbers are in decline.) All of these baitfish tend to travel in schools, and the stripers that depend on them follow this food source. The stripers also work their way up-river in the spring. A large range of age classes will make the journey, with similar-sized stripers tending to travel together. Since the bait is constantly on the move, so are they.

My favorite way to target these spring stripers is with spinning tackle on the light side. Most of the fishing is in shallow water, throwing relatively light lures, so it’s a great opportunity to enjoy battling bass of all sizes. I use what I like, and that’s Shimano Stradic reels in the 5000 size spooled with 30-pound-test Daiwa Samurai braid. I like the Daiwa Samurai because it has a smooth finish that makes it quiet to cast. (When fishing topwater lures, remember that the braid has much less stretch than monofilament, so you have to be careful not to yank the lure away from the fish on missed strikes.) The reels are matched with 7-foot St. Croix Avid series rods in either medium or medium-heavy weight sizes. You want to choose a rod that has a sensitive tip for fishing light lures but decent backbone to land large bass without unnecessarily prolonging the fight. The combo works great for tossing everything from unweighted soft-plastic baits up to larger swim baits, and I’ve had no problem landing stripers up to 46 inches.

When it comes to choosing lures, “matching the hatch” is not critical. In general, you want to replicate a good-sized baitfish. I bring a selection of lures in five categories that can cover the water column, including, of course, the surface!

Adding a jighead to a soft-plastic lure is a way to get the lure to the bottom, if needed. Typically in this section of the river, the bottom is not all that far down, so you can use a lightweight jig; however, make sure the jig has a heavyweight hook that won’t straighten on a big bass. After much searching, I found a 3/8-ounce jighead with a 3X-strong 3/0 hook made by Bill Hurley Lures. I occasionally use a ¾-ounce jighead, but under most conditions the 3/8-ounce head suffices, especially when fished on low-diameter braid.

I categorize as crankbaits all hard lures that dive. One of my favorites is similar to the lipless crankbaits popular for largemouth bass. It’s called the Gag’s Slammer, and it has a deep body that matches the profile of a herring. Unfortunately, it is not currently being manufactured. The other type of crankbait I carry are the long, thin minnow-type crankbaits, like the Bomber Magnum Long A, which is 7 inches long and runs about 3 feet deep. The thinner profile might not look like a herring but it’s easier to cast. I’ve found the best retrieve is one that is just fast enough to make the lure wobble.

Swimbaits have become very popular with largemouth bass fishermen. If you are targeting stripers, many of the same techniques apply. My light gear limits the use of these oversized baits, so I stick to lighter swimbaits. Although, of the seemingly thousands of swimbaits out there, I particularly like the Jerry Rago 7-inch BV 3D Pro Inline swimbait, which weighs in at a fairly heavy 3 ounces. This lure does not get very deep, but it has a lifelike swimming action that closely matches a herring.

There are many different styles and types, but as a general rule of thumb, stay in the 7- to 11-inch range, and use a hook that matches the lure. Lunker City’s Slug-Gos, Striper Snax, Fin-S Fish, and Bill Hurley’s Striper Magnets can all be fished weightless on offset worm hooks. If you use the Lunker City 8/0 hook that comes with their lures, be sure to double-check the point regularly, as it can bend. As far as colors go, I keep it simple and fish white, gray and black for the most part, saving black for fishing at night. The key is to rig the lure so it will hang perfectly straight on the hook.

Fishing topwater plugs is very popular and a lot of fun because you get the thrill of seeing the fish hitting the lure. Many times, just the excitement of seeing the fish attempt to eat the lure is enough to keep me entertained. I separate topwater plugs into two categories, with the first being the walkers. This is the “spook” style that zigzags back and forth in the water as you retrieve it, a motion commonly referred to as “walking the dog.” If you’re new to walking the dog, it is best to practice a little before you find yourself in the middle of a topwater bite. The Doc, Rapala Skitter Walks, and the old standard Heddon Zara Spook are three lures that fall into this category. The other style of topwaters are poppers or chuggers. These lures have cupped mouths, and they are fished with short sweeps of the rod to get them to splash. I like the Rapala Skitter Pop and the Yo-Zuri Hydro Pop.

Watch OTW’s Kevin Blinkoff and Eric Matland catch big stripers in the shallows at the mouth of the Connecticut River.

The lure you use is important, but when fishing for stripers in water less than 5 feet deep, what you do while fishing can be just as important. Stealth is important and often gets overlooked. Use the natural flow of the tide to set up a quiet drift. Time and time again, I see boaters come in too strong with their main motor. When approaching an area, move in slowly because in shallow water your wake can disrupt an area very easily. Use a trolling motor if you have one, or at least kill your engine well upcurrent of the area you intend to fish and drift down on it. As you drift, use your trolling motor only as necessary. I even turn my sonar off and only use the GPS function to ensure that the transducer’s pinging is not spooking fish. Lastly, be careful not to drop anything and do your best to keep an organized boat to avoid tripping over gear. The only loud noise you hear out on the river should be the sound of a big striper thrashing the surface after it makes a meal of your lure.

Captain Matthew DeBacco runs light-tackle striped bass charters out of Rocky Hill, Connecticut during the month of May. He can be reached at DeBacco@cox.net.