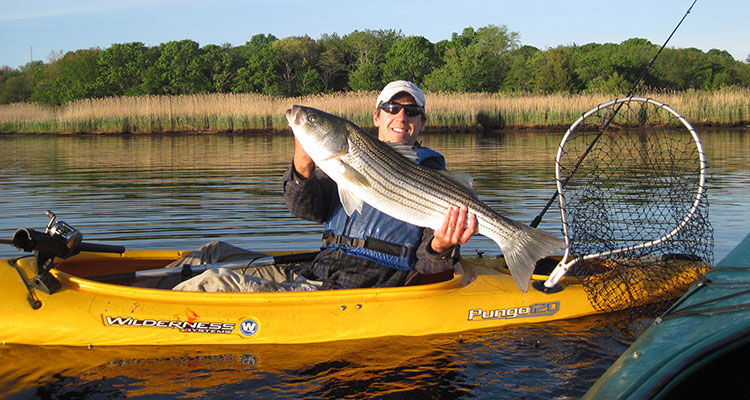 The Peconic Estuary, which extends from the Peconic River in Riverhead to Gardiners Bay, is one of the most diverse and productive fisheries on Long Island. There isn’t a season when my wife Donna and I fail to take bluefish, striped bass, fluke, black sea bass, blackfish, porgies, kingfish, weakfish and blowfish from these waters. To sustain these predators, the estuary is home to baitfish such as juvenile and adult bunker, eels, sand eels, spearing, shad, mantis shrimp, crabs, clams, mummichogs, mullet and certainly much more.

Donna and I begin most of our fishing trips by working the shoreline of the Peconic River before heading out to one or more of the bays between Long Island’s North Fork and South Fork.

With an average depth of 5 to 8 feet, the Peconic River transitions from a mud bottom in downtown Riverhead to sand just past Colonels Island out to Buoy 2, which marks the mouth of the river.

Obeying the 5 miles-per-hour, no-wake zone until we reach Buoy 10 on the Peconic River, we’ll drop down to a couple of knots and troll for a distance before heading to a specific area. Trolling allows us to cover water and reveal what might otherwise be missed if we drove past without lines in the water. I might troll an eel-like tube lure just off the bottom while Donna works a tin higher up in the water column. Occasionally, there a big fish will take us by surprise around Colonels Island, just east of the 105 Bridge.

Eels, silversides, mummichogs and grass shrimp are on the menu for the Peconic River stripers, blues and weakfish. Live bunker can be acquired in the river by snagging the adults or seining the peanut-sized bait. In the summer of 2008, hundreds of thousands of adult bunker swam up the Peconic River to seek refuge from a school of hungry bluefish. The school of bunker quickly used up the oxygen in the confined area and died. The shoreline from the downtown Peconic River area all the way out to Mattituck was strewn with dead and decaying bunker. Living close to the river, we couldn’t have anyone over for a barbeque for weeks.

Donna and I will troll along the north side of the river while heading out, then fish the south side on our return trip. When we run into a respectable bass or blue, we’ll live-line bunker or eels, throw plugs (both surface swimmers and deep divers), or cast a baitfish fly into seams and shallows. 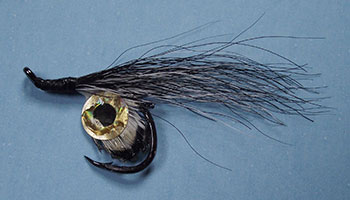 1. Lightly apply epoxy to the back of both stick-on eyes and place them just above the black-marked rims of both Lady Amherst pheasant feathers. Allow to set.

3. For top wing, mingle a sparse amount of black and white bucktail, which will extend approximately one inch beyond the bend of the hook. Tie securely behind the eye of the hook.

Reeves Bay is just southeast from the mouth of the Peconic River. The bay is directly across from the northeasterly tip of Indian Island County Park. This pocket bay holds some schoolie stripers, cocktail blues and occasionally weakfish. Depths range from 5 to 6 feet of water in the channel to 2 or 3 feet of water to the east. This is one area where Donna and I break out our fly rods and have tremendous success with a fly I created, the Bob B. Bull’s Eye.

Stripers hang out very close to the shoreline in Reeves Bay, especially on an incoming tide. We keep an eye on the depth finder for very shallow spots just east of the channel leading into the Flanders Men’s Club.

The next bay just east of Reeves is Flanders Bay, which is considerably larger than Reeves. This is where we set aside our fly rods and pick up our spinning outfits to work the shoreline with tins and plugs from the easterly tip of Indian Island County Park in Aquebogue to South Jamesport along the north shore, or along Hubbard County Park in Flanders on the south shore.

We look for a drop-off from 4 feet down to 13 feet just northeast of Red Cedar Point on the south shore. Heading north, the west side of Simmons Point has been a hot spot for blues on an incoming tide.

If we see bunker along the way—either peanuts or adults—we load up the livewells. You may be amazed at the lunker that will attack a snagged bunker you were reeling in to add to the livewell. And you thought you were only getting ready to go fishing!

Once we pass Simmons Point, the waters open up to Great Peconic Bay, the next easterly bay. It lies just to the west of Robins Island, between South Jamesport and Mattituck on its north shore and Southampton on its south shore. We troll or cast into schools of surface-feeding stripers or blues south of R2 in 20 to 25 feet of water. We ply the waters with our arsenal of go-to lures, generally metal lures like 1½- to 2-ounce Kastmasters and Charlie Graves Tins; poppers such as the Gibbs Polaris popper; and subsurface lures like a sinking 7-inch Sebile Magic Swimmer or a 6-inch Hurricane Livewire chartreuse-and-silver shad.

Continuing east, we come to Rodgers Rock, an area famous for its porgy fishing. Small pieces of clam or squid (thumbnail-sized) work wonders. The North and South Races, off the tips of Robins Island, are also excellent areas. Additionally, the North Race is good for blackfish, as the area on the west side of Robins Island is rocky. Fiddler crabs are the ticket and are easy to come by.

While exploring on a hot summer day, we found a great spot for fluke at R30. Look for 14, then 27 feet of water and fish the drop-off. Just to the east of Great Peconic Bay is Little Peconic Bay. Directly opposite Nassau Point is Rose Grove, where a combination of a sandy and muddy bottom is a haven for fluke. It’s a favorite hot spot for charter boats as the fluke fishing in this area is excellent.

Heading into Shelter Island Sound, Donna and I get serious, casting 7½- and 12-inch jointed wooden lures or trolling tubes. The current rip off Jessup Neck, which divides Little Peconic Bay from Noyack Bay, is our hot spot. Work the rip from 27 to 70 feet.

Next, we hit the Greenlawns, located on the west side of Shelter Island, just north of Jessup Neck, heading east between N14 and C15. Scout around for 56 to 77 feet of water, and drift for fluke right off the old oyster factory stack.

It then becomes a question of whether we want to take the northeast route along Shelter Island toward Orient Harbor or the southeasterly route to Gardiner’s Bay. Weather, tide and what we’re targeting determines the answer. It’s best to steer clear of Gardiner’s Bay in a brisk easterly wind—the waters can become treacherous.

Tie the hook to a 40-inch length of 20- to 30-pound-test fluorocarbon. Take two fluorescent beads and set one just below the B2 Squid to prevent the lure from working itself down along the shank of the hook, and the other above the soft-plastic squid, serving as an attractor. Next, add a swivel to the other end and a dropper loop large enough to accommodate a variety of sinker sizes. The end result should be an approximately 30-inch length of leader between the weight and hook. This simple rig is deadly on fluke in Gardiner’s Bay (and anywhere else).

If the conditions are right, we’ll head for Gardiner’s Bay and cross to the Ruins (Gardiner’s Point Island), just south of 1G, and work our way from 70 to 100 feet of water. To tempt the large Gardiner’s Bay fluke, we use the combination of a soft-plastic B2 Squid in glow, a hooked-through-the-eye and out-the-mouth mummichog and two squid strips.

Your best bait for fluke, bar none, is fresh squid, if you can get it. Like us humans, those flatfish love fresh calamari—hold the sauce. Hitting the lighted Railroad Dock in Greenport with a pink sabiki rig or squid jig during a mid-May evening will produce the coveted bait.

Two ½-inch-wide tapering strips of squid, approximately 4 inches long each, is your ticket. Cut a slit in the center of each strip three-quarters of the way up in order to create a nice fluttering action in the water. When threading the strips on the hook, avoid creating creases near the top of the squid strip. Nice and flat for those flatfish, I remind myself.

I wonder what Donna and I will find this spring, especially after Hurricane Sandy hit our shores. Working in conjunction with your paper chart, a good GPS will provide you with invaluable information about the area and what may have changed during the fall and winter storms.