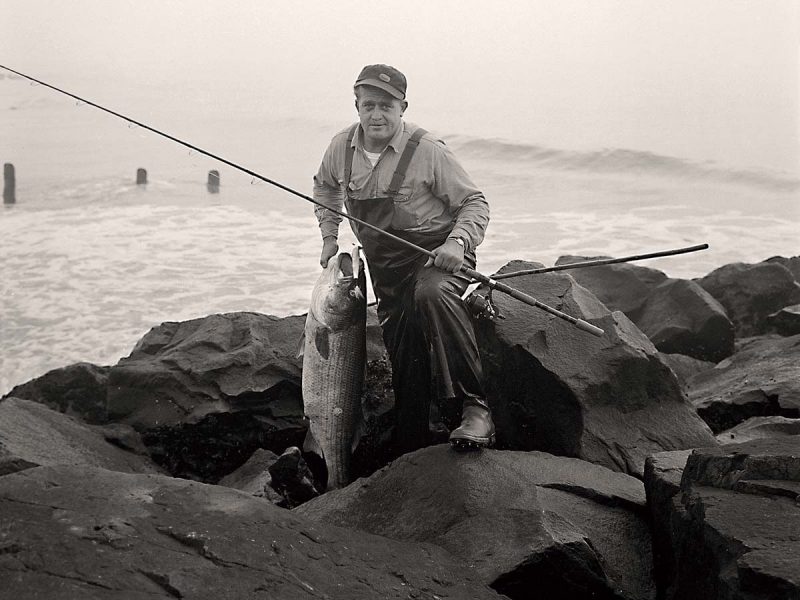 Much can be garnered from an old photograph, like the one above featuring Joe Carrie hefting a 34-pound bass. He is holding a fiberglass surf rod with Perfection wire guides and Neocork grips. Attached is a Centaure French-made spinning reel that is taped to the rod for a warmer grip in cold weather. Finally, in the fish’s mouth is a Junior Atom. Everything about this black-and-white photograph is vintage 1950s.

Fixed-spool or spinning reels were first invented and used in Europe in the 1930s. After World War II, a wealthy American sportsman named Bache Brown went to France, where he helped develop a small spinning reel that he named after himself and brought to the United States to market. His company was purchased in 1947 by the toymaker Lionel and named Airex. That same year, Airex brought out a new model called the Beachcomber. It was not a very large reel, weighing in at 16 ounces and holding 250 yards of 15-pound-test monofilament. It had a full bail with an external trip, contrary to the half bail on most European reels. This was the beginning of a whole new era.

By the 1950s, many more spinning reels came on the scene, primarily freshwater ones from both Europe and America, but some larger ones designed for surfcasting were also coming from Europe. From France, there was the Mitchell, RU, Luxor, and the Centaure. Italy produced the Alcedo and the Delfino, and Germany made the DAM Quick. Reels from Asia were not on the scene until the 1980s, although Daiwa and Shimano did make a few freshwater reels in 1966 and 1978, respectively.

Penn came out with a surf spinning reel in 1961—the model 700, later refined to the 704 and 706. This reel used a worm gear drive the company probably copied from the German Quick. The 704 and 706 were (and still are) excellent reels still made in America. No other reel in the history of fishing can come close to matching that longevity.

Except for the large Luxor and the Penn, none of the reels had ball bearings, and the Luxor and Penn had only one, the main pinion bearing. I should mention that the 706 had two, one being in the line roller. Essentially, all the remaining spinning reels relied on sleeve bearings that, if properly maintained, did a good job. Of all these reels, the Luxor and the Penn were the most popular, primarily due to their strength and reliability. The Luxor was easy to convert to manual pickup, and because of its simplicity, could be disassembled and lubed in ten minutes. This feature made it the reel of choice for wetsuit-wearing fishermen, who came on the scene at Montauk in the early 1960s. Don’t forget that there were no waterproof reels back then. The Van Staal didn’t appear until 1991—about 30 years too late for me and other early wetsuiters.

The Centaure and the RU faded in popularity in the 60s, probably due to their half bail features that most anglers did not like. The RU actually had a stationary roller … that’s right, it didn’t roll. However, both of these reels had a feature that none other did—a flanged (or skirted) spool. With a few exceptions, this style now dominates modern spinning reels.

In the 60s and 70s, the Luxor was the top choice among serious surfcasters on Long Island and in Rhode Island, but trouble was brewing in France with Pezon et Michel, the distributor of the Luxor. A Frenchman named Paul Mauborgne, who designed the reel, had a falling out with Pezon et Michel. Mauborgne then marketed the reel under the name Crack (which means champion in French). The two adversaries became involved in endless court battles, and around 1980, production of the Crack ceased. Over the next few years, parts for the reel became rare and fetched black market prices, leaving the Penn 704 and 706 as the only options. Mitchell and Delfino did compete, but both reels had reliability issues. It took 10 years after the demise of Crack before another suitable surf reel was created—the Van Staal.

Both the Van Staal and the ZeeBaas are essentially waterproof Luxors. The mechanics of both reels are very similar, but I freely admit that these submersible reels are superbly constructed.

With the exceptions of the Penn 704 and 706, which have a worm gear drive, almost all the rest have spiral bevel gearing. For gear construction, there is stainless steel, brass (an alloy of copper and zinc), bronze (an alloy of copper and tin), zinc, aluminum, and duraluminum (an alloy of copper and aluminum). The manufacturers usually indicate which metal is used, unless they use zinc, in which case they don’t want to brag about it. Next, there is the issue of the reel cam. A cam, sometimes called an eccentric, is a mechanical linkage to transfer rotating motion to linear motion; in other words, what makes the spool of the reel reciprocate.

Only four reels have a direct-drive cam: Van Staal, Zee Baas, and Penn’s 704 and 706. On these reels, the spool goes in and out once for each turn of the reel handle. All the rest of the reels either have a crosswind gear cam driven by the main drive gear or an oscillation worm gear for the spool reciprocation. The latter is used when the reel maker wants a very slow spool motion for what is called a long cast reel marketed by Shimano, Daiwa, and Penn. Whether or not the elongated, slowly reciprocating spool results in a longer cast is debatable.

Lastly, there is the question of what the reel body made of. Many reel makers use a graphite or synthetic material, while others use aluminum. Some reels have metal for the gear housing and graphite for the rotor. Make no mistake about it, all-metal (aluminum) reels are the most expensive and the best.

Another issue among spinning reels is that of the anti-reverse. This was always a weak point in many past reels, but in 1991 the then-new Van Staal solved this problem by building into the pinion drive a one-way roller bearing, which was very effective and trouble-free. A decade or so later, just about every manufacturer adopted this design. It is a full-time feature, though several reel companies do allow the anti-reverse to be defeated on some of their models. All of today’s spinning reels have greatly improved drag systems – miles ahead of the crude, early drag systems.

So, there you have it–a product’s evolution over 80 years that has seen it almost solely made in Europe, with a few U.S. makers, and then becoming an Asian business (primarily China). Most of those European companies still market reels for European consumption, but they are all made in China. There are two exceptions, though. Of the many reels that ABU Garcia markets, one reel is still made in Sweden and a company named Peerless BAM still produces spinning reels in the southwest of France. Although only three companies in the U.S., Penn, ZeeBaas, and Accurate, assemble or make reels in America, I should be fair in saying that China, Japan, and other Asian countries do a fine job of turning out quality products. In conclusion, as the surf fisherman exclaimed when the line parted after a long fight with a trophy bass, “That’s that.”

This article was originally published online in August 2018.