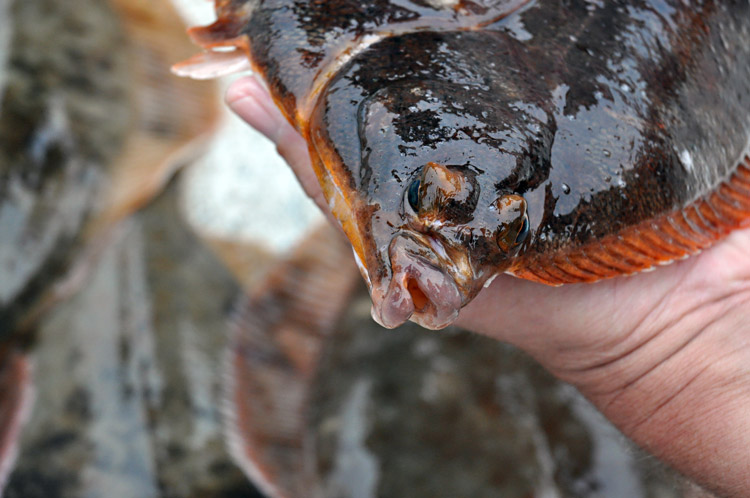 Flounder may be best known for their white meat and sweet flavor, but they’re not just a great meal – catching them can be fun for the whole family. And guess what? After many years of slim pickings, there are once again plenty to catch, as anyone who has been targeting them along the South Shore for the past few years can attest.

Winter flounder, or blackbacks as we call them on the South Shore, once supported a massive fishery along the Massachusetts coast that was centered in Boston Harbor. I have to admit, the flounder fishing will probably never be the same as it was back when my family fished for blackbacks in the seventies, when my father would stand at the picnic table cleaning flounder for three hours after fishing one tide in Hingham or Scituate harbor. South shore flounder fishing today is nowhere near what it was back when I was young, and I am willing to take some of the blame for the decline. We all took more fish than we needed, and we really put a hurting on the species. Commercial draggers, which would tow nets at night in the spring right up along the beaches at Shore Acres, Humarock, and Brant Rock, contributed as well. It was easy pickings for the commercial fleet; since flounder rely on sight to feed, they lie nearly dormant at night and few escaped the draggers’ nets.

Well yesterday was yesterday, and tomorrow is tomorrow. And now that the recreational bag limits and commercial limits are far more restrictive than in the past (when there were no limits at all), it has given these fish a chance to rebuild. The 2014 recreational blackback limit for North of Cape Cod is 8 flounder over 12 inches with a season open all year long.

Flounder start to feed in April after a late-winter spawn, and they are available to catch in the nearshore waters of the South Shore, including sandy beaches, estuaries, and inside harbors, right up through midsummer.

Spring just happens to be the best time to target flounder. There have been plenty of anglers who try to get a jump on the season and catch flounder in late March, but there have not been many reports of success. I think the water is still too cold north of Cape Cod for the flounder to get active. Late April is when you want to start fishing for flounder on the South Shore. This is when the fish will really start looking for something small to eat. Flounder eat mostly small worms and shrimp. Sandworms seem to be the number-one bait to catch flounder, but often a decent-size clam strip will score you a larger fish. You know the old saying: big bait catches big fish!

So now that we know they are here, it’s time to go out and catch ‘em. Flounder gear should be on the light side, whether you are fishing spinning gear or conventional. As far as line goes, 12-pound- test monofilament or 20-pound-test braided line is sufficient. The beauty of flounder fishing is that it is simple, so don’t make it complicated! The rigs you use should also be kept simple. There are various options when it comes to store-bought flounder rigs, if you don’t want to bother tying up your own. The Zing double- hook flounder rig is a good one, as is the Fin Strike flounder rig, but a simple hand-tied homemade flounder rig will suffice. Use a leader of 20- or 30-pound-test monofilament (pink is a good color) with a100-pound-test barrel swivel at the top, a dropper loop in the middle, and a surgeons loop at the bottom for your sinker. On the dropper loop, use a loop-to-loop connection to attach a 12-inch snelled flounder hook, size 7 or 8, with a bead. Bring big, fat sand worms and you are good to go.

Flounder fishing is a daytime thing. Typical of any fishing trip, the early morning will always beat out midday to late day, especially in harbors or areas subject to heavy boat traffic. First light in the morning is always best if you can hit your tide right, so try to fish the first half of the day if possible. Moving water is very important. It may not matter if you are fishing the flood versus the ebb, but current flow is important. When you anchor up, be aware of which way the current is moving so you can take advantage of the flow and put your baits where you want them. The current will move your baits around, so use the lightest weight you can in order to stay in contact with the bottom but one that still allows your bait to kick around a small distance. A lot of seasoned flounder fishermen will also slowly retrieve their baits; this will puff the sand or mud, providing another visual trigger to entice a strike.

Although the flounder rely on their sight, they also have a strong sense of smell. This is where chumming comes in. Chumming for flounder can be very effective. Fill a chum pot with a bunch of broken clams or mussels to bring the flounder in to the boat. Rabbit food pel- lets are also a proven chum for flounder. The pellets can be distributed around your boat, so you have a 360-degree bite zone! Pick a productive flounder spot, fish it when the water is moving, and chum (if you like), and you’ll bring home some of the tastiest filets New England has to offer.

Boston Harbor was once known as the flounder capital of the world, but the often-overlooked flounder fishing south of the Harbor was excellent as well. The historical flounder fishing hotspots of the South Shore are still not quite what they used to be, but they have been steadily improving for the past five years.

Starting just south of Boston Harbor, the south end of Nantasket Beach in Hull provides good flounder habitat, which usually consists of sandy, gravely bottom. Similar bottom can be found around the jetty near Gunrock Beach. I’ve spoken to divers who patrol these waters and they see and harvest some really nice flounder here. Moving south toward Cohasset is a very productive spot, Little Harbor. This is a salt pond that in the spring has the current, bottom type and food supply to attract flounder. Bigger boats do well on both sides of the tide, and inside of the pond is very good too. Cohasset Harbor will also hold flounder, as there is good water exchange in and out of the Gulf River. Heading toward Scituate, the stretch from Minot around Sunken Ledge to Mann Hill Beach and Shore Acres or the Egypt Beach area is a great area for flounder. Cowen Rock and Little Cowen sit about one-quarter to one-half mile off the beach, between Egypt and Mann Hill. This is good territory around Cowen Rock, and has always been a nearshore Scituate hot spot.

Scituate Harbor is your next stop, and each year the largest black- back of the year comes from here; the flood tide at sunrise usually does best. South of Scituate Harbor runs the cliffs of Scituate. Peggotty Beach offers up some really nice area. There is a rock wall that runs from Peggotty to the spit; large boulders are abundant in this run, with a nice gravel and sand bottom between the big rocks. Again, divers see a ton of flounder in this stretch of shoreline. This is also a good spot for the shore angler to try his luck for some nice blackbacks. Access is from Peggotty Beach, starting at the south end of the beach or off the wall itself. The confluence of the North and South rivers will give you plenty of current, and many types of shellfish exist here. The first turn coming into the South River has been famous for blackbacks (and an occasional fluke). A long stretch of open beach runs from the North River to Green Harbor, but there is no reason for flounder not to hold up here in the spring. Beetle Rock off Rexhame gives good structure where the flounder might hide from predators such as cod, bass, and dogfish. The north side of Green Harbor, out in front of the trailer park to the Farnham Bell, has really good bottom for winter flounder. Many shore anglers will fish the jetties at Green Harbor with good success. On over to Duxbury, try out in front of the Gurnet in about 30 feet of water; clams and seaworms on the bottom here will pleasantly surprise you. Plymouth Harbor will be your next stop on the coast; it’s a large area and a good place to drift if you have the right wind. Plymouth can be both productive and scenic at the same time, and there’s enough water to be worthy of its own article.

Now that spring is here, break out the light gear and have some good fun with the flounder. Flounder fishing can be really fun fishing and a great, low-key way to introduce new anglers to the sport. Most saltwater fishermen of a certain age will tell you that their earliest fish- ing memories are flounder trips, some even with hand lines! So bring the kids or the neighbor’s kids and start off your 2011 season with a fun and memorable flounder trip. And don’t forget about keeping a few delicious filets for the table.