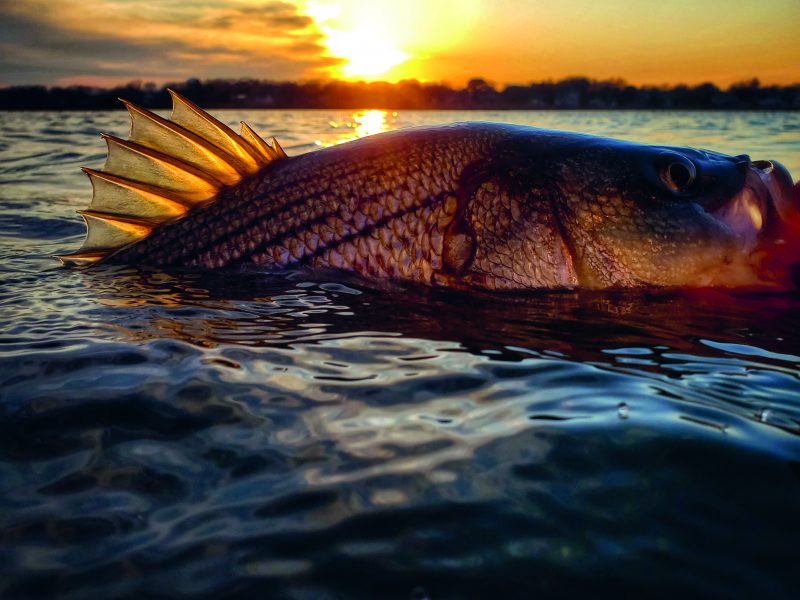 A thin layer of fog hovers over the bay as we depart the marina, the result of water that is much cooler than the air. The rising sun peeks above the horizon, a sun that rises a little earlier each day, its warm glow welcomed by all the life in the marsh. These sometimes subtle and sometimes dramatic changes are what fuel migrations, not only of the striped bass, but of all the life in these waters.

As we make the run out, our eyes set sight on some welcome avian friends that have just returned from their winter vacations. Glossy Ibises comb the marsh in large flocks, looking to refuel after their long journey north. An osprey perches on his nest, awaiting the return of his mate while he cleans up what the winter winds have rearranged. And, probably one of the most recognizable signs that spring has sprung, the call of a laughing gull can be heard in the distance. This is the time of renewed life in the backwaters of southern New Jersey as the cycle of death has shifted to the cycle of rebirth—the Yin to the Yang.

Approaching the fishing grounds, we stop on a deeper pocket, an area where fish are usually found this time of year. The fishfinder appears lifeless when we come off plane, set the trolling motor in the water, and slowly and quietly approach the subtle seam in the current—a perfect ambush point for bass holding deep.

All eyes are on the fishfinder at this point, as at first glance it looks as barren as a winter sod bank, then all of a sudden, a mark appears, then another, and another, and now layers of them as we move over top of a large school of bass. As the trolling motor anchors us in place, we reach for the nearest rod, drop a jig, and instantly hook up.

The feeling of the bite is familiar yet different from those over the past couple months. Memories come flashing into my mind of the last fish I had on, whether it was the mid-February pickerel in a nearby creek, a hard-earned take on a snowy trout stream, or that redfish I sight-fished just after the new year far away from where we are now. All of those, however, were just passing the time until this moment. Welcome to spring!

Early in the southern New Jersey striper season, around mid-March, there are three different groups of stripers in the backwaters. There are the winter holdovers, the year-round residents, and the migratory fish that arrive from the south to spawn in the rivers and creeks. 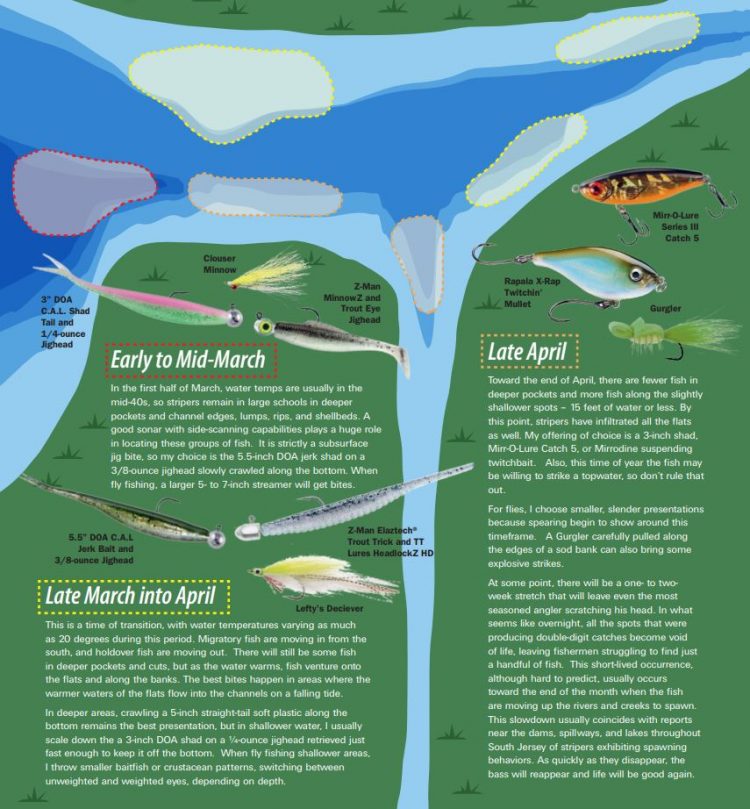 The holdovers have spent all winter here, killing time until the water warms and daylight lengthens. Once this happens, the fish leave and head for northern waters to spawn (possibly anywhere from Hudson River to Canada), and they’re usually gone from the region by early April. Success with these fish is very much dependent on water temperatures.

If the end of February is too cold, the early March bite may not develop, and the bite might not turn on until as late as April. Holdovers sometimes slip under the radar. Temperatures can vary dramatically during spring some years. I remember times at the end of February and into March, when there were boat-size chunks of ice floating in the bay. The magic range to get holdovers feeding is the low to mid-40s—once we hit those temperatures in the bay, it’s game on!

The resident bass call South Jersey bays home year-round. These stripers hang out in the same areas as the holdovers early in the season and can be targeted the same way.

Spawning fish, those that are migrating from south (usually after wintering around the Chesapeake Bay, the Carolinas, or offshore of the Delmarva Peninsula) usually show up around mid-April, filling the vacancy left by the departing holdovers. Once the migratory bass arrive, they stage for a short time in the backwaters until temperatures, daylight, and baitfish migrations align for a potentially favorable spawn. At that point, they make their move up the rivers and creeks to their freshwater spawning grounds. Afterward, many of them exit the tributaries quickly, heading for the ocean on their way to more northern waters to spend summer.

It’s important to note that at some point in the spring, the larger female fish in South Jersey’s bays will be full of roe, and those eggs are critical to the future of the striped bass fishery in our home waters and throughout the Northeast. So, proper handling and reviving of these fish is of the utmost importance to help ensure they spawn successfully. When I encounter these female fish, easily identified by them being very wide and usually 30 inches or longer, I move on to look for another school, leaving those fish alone as they prepare to spawn. Often, a large school of males, typically smaller, skinnier fish, will be somewhere nearby.

I use a 7-foot rod rated for 8- to 15-pound line or up to ¾- to 1-ounce lures. I match this with a 2500- or 3000-size spinning reel spooled with 15-pound-test braided line, finished with a 20- to 25-pound-test fluorocarbon leader, usually around an arm’s length, connected with an Albright or double-uni knot. I then attach the lure with a loop knot.

For a fly rod, I like an 8- or 9-weight with a sink-tip line around 350 to 400 grain for deeper spots where the fish are 20 feet down or more. For an all-in-one option, an intermediate line is best. In late April when the fish are shallower, floating lines work as well. The spring striper season has some drastic changes between March and May. However, if you follow the movements of the fish, watch the water temperatures, and take care of handling fish properly upon release, you can enjoy some action-packed fun without the summertime crowds.