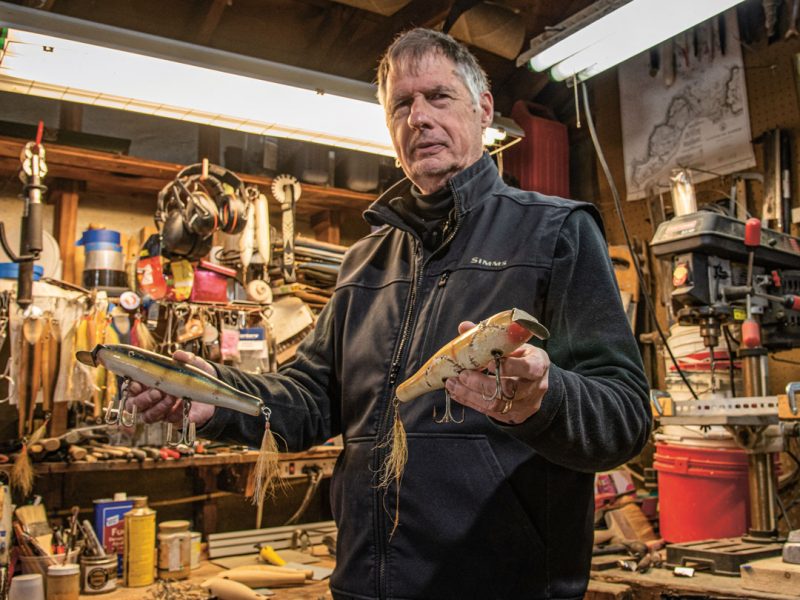 Of the 350 plugs that Gary Soldati brought to the Asbury Park Fishing Club Flea Market in 2006, he sold 19. The flea market, which began as a way for club members to sell off extra tackle, quickly became a must-visit event for striper fishermen hoping to acquire the most coveted custom striper plugs available. Legendary plug builders, Lefty and Wade Carr, along with Bill McFadden, were early headliners, and their presence at Asbury had fishermen lining up hours before the event, huddling against the damp, early March cold, for the chance at purchasing a plug.

The year before, Soldati had been in that line himself, arriving at 4 a.m. and settling in line behind 48 other surfcasters. This meant he made it just in time to get a swimmer from Lefty Carr.


Soldati began turning plugs in 2004. He had been thinking about getting into lure building after becoming dissatisfied with the size of the bass he’d been catching on his formerly preferred method, live eels. A painting contractor by trade, Soldati was good with his hands and knew he could turn out a fishable plug, but he was planning to wait until he retired. Then, in May of that same year, what initially felt like heartburn turned out to be a widowmaker heart attack. Finding himself out of work for two months to recover, Soldati got his first lathe, bandsaw, and drill press, then dove into lure building.

Soldati knew he wanted to make a metal-lip swimmer, and because he wanted to target larger stripers, he knew it had to be big. There were few large wooden swimmers on the market in the early 2000s. It was right on the cusp of the bunker boom, when large schools of menhaden returned to nearshore waters after the large commercial “reduction” fleet—the one scooping up bunker by the ton to be processed into livestock feed—was exiled from New Jersey state waters. Most builders at the time were making smaller swimmers, which left a hole in the market for Soldati to fill with a super-sized metal lip. He just needed to decide on a style.

Right away, he dismissed the idea of making a Danny Plug—a surface swimmer with the rolling gait of a drunken sailor at last call—because too many builders already made them. This left him with the choice between a Surfster and a Pikie, two plugs originally designed by the Creek Chub Lure Company. A traditional Surfster has a cupped lip that has a beautiful action when retrieved across the surface of calm water, but it lacks versatility. The Pikie, however, has a flat, bent lip that lends itself to “tuning,” meaning it can cover a greater range of depths in a wider range of conditions.

Fishermen have been using Pikies in one form or another for more than 100 years, but when Soldati settled on it as the lure he wanted to make, there were few striper-sized options available. One of them was the Mac Pikie made by Dave MacLeod. Soldati attended a demonstration by MacLeod at the Massachusetts Striped Bass Association Expo one winter, and later invited himself to MacLeod’s shop, where he saw the process in greater detail.

Soldati had a specific swimming action in mind for his big Pikie, which he later began calling a “Pike.” He had found the action on an old plug he’d brought with him to Block Island to evaluate. It was one of a number of older plugs he had along, hoping to find one with an action worth recreating. When he saw it, he was mesmerized by the fluid wiggle and seductive tail-kick when a bass appeared from behind a boulder and relieved him of the lure.

None of the commercially available metal lips gave the action he’d seen on that plug, so he ended up hand-cutting his lips out of stainless steel and bending them by hand. It was hard and tedious work. A friend, seeing him bend the lips by hand, helped him get a press and dies to streamline the process. Each lip Soldati makes requires three dies—to cut out, put in the holes, and then bend.

Soldati had done all this work before the first year he exhibited at Asbury, and he believed in his lures, but the results from that show had him questioning whether plug building would become a viable source of income when he could no longer climb ladders to paint houses. He went back to school to pursue a master’s degree in social work (his backup plan for retirement), and for a period, Soldati split his time between painting houses, going to school, and making plugs.

By the time Soldati received his associate degree, with two more years of school ahead of him, the plugs had begun to take off. The season after his humbling trip to Asbury, the stripers locked in on the increasingly abundant bunker hugging the coast, and the fishermen who subscribed to Soldati’s “big plug, big fish” theory reaped the rewards. By 2008, he couldn’t make his plugs fast enough to meet the demand.

I’d met Gary Soldati a handful of times at the winter fishing shows, where I was part of the crush of surfcasting humanity rushing toward his booth, eager to purchase a Big Water Pike. This past March, Soldati was kind enough to invite me to his home and workshop in the Massachusetts’ Berkshires.

You might think living some three hours from the ocean would rule out regular surfcasting trips—and for most anglers, you’d probably be right—but not for Gary. He does what he calls “commandos,” overnight trips to the surf, where he drives from the Berkshires to the coast in the evening (Rhode Island is the closest ocean beach for Gary), fish through the night, and return home after dawn. He’ll even do commandos to Block Island, catching the last ferry in the evening and returning on the first ferry the following morning.

Gary’s surfcasting obsession began in August 1981 when he caught a bluefish. Already an experienced fly and freshwater fisherman, that blue was bigger and stronger than any fish he’d ever caught. By that November, he’d made his first trip to Montauk.

During my visit with Gary, he walked me through the process for making one of his lures. Over the past 18 years, Gary has become so efficient that he estimates each plug takes him roughly 90 minutes of work (not including the time spent drying the paint and epoxy) to get from wooden dowel to fish-catching work of art—my words, not his. He even let me turn a Pike of my own, and while I won’t be quitting my day job anytime soon, the fact that it looks pretty darn good is a testament to how streamlined Gary’s process is.

His workshop is a converted single-car garage that he’s adorned with dozens of plugs, both his creations and those of other talented plug builders with whom he’s traded wares. The ceiling is lined with surf rods, including one with a pristine (though clearly well used) Crack spinning reel taped on. There’s an 800-pound screw press, two lathes, crates upon crates of wooden dowels, and there’s still room, Gary said proudly, for his wife Patricia to move her car in when it snows.

Now retired from his work as a painting contractor, Gary is in that garage workshop as much as ever. He continues to produce enormous, beautiful metal-lips swimmers, and has even added a darter to his repertoire. It’s big, of course, and has the distinctive look and paint of a Big Water lure. Gary said he made it because as versatile as the Pike is, on some nights, darters seemed to be getting more bites, and he doesn’t like being outfished. He stays connected with his customers through a newsletter you can subscribe to on his website, and he takes surfcasting commandos as often as he can. And, somewhere out there are a couple hundred fishermen still kicking themselves over not buying a Pike when they had the chance in 2006.