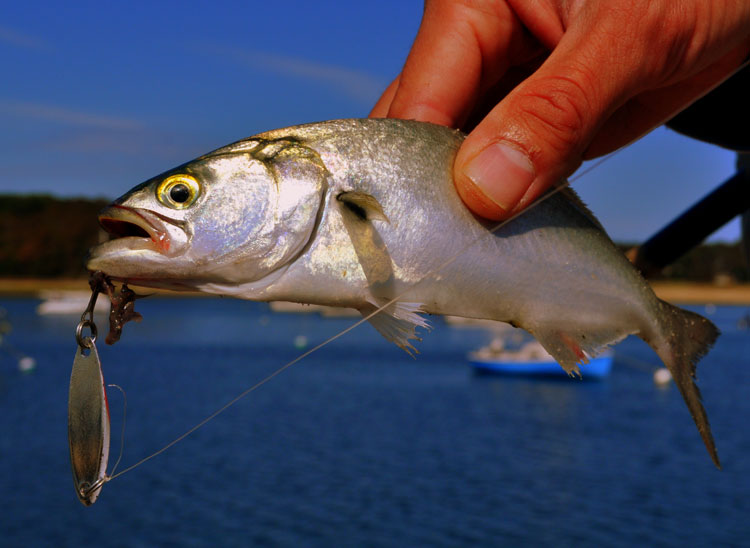 By the time they’ve reached a half-foot in length, “snapper” bluefish are perfect, miniaturized replicas of their big brothers and sisters, in both physical form and aggressive, tooth-gnashing attitude. With a ravenous appetite that’s necessary to fuel their quick growth–they reach about 10 inches in just one summer–they’ll strike at any lure smaller than themselves, making them a great target for beginner fishermen, youngsters, and the young-at-heart. They’re also great eating, and catching three of them to turn into a perfect summer meal often only takes three casts. At least that’s how I confidently explained it to my fishing partner as we set up on the end of the marina dock on a Sunday afternoon in September.

Twenty minutes later, we had just one lonely bluefish swimming slow laps around our 5-gallon bucket. The snappers were there–wolfpacks of them would chase our Kastmasters all the way back to the dock on every retrieve–but they always stopped just short of snapping at the lure. The little 6-inch fish were making a fool of me. I guess they have more in common with full-sized bluefish than I had realized.

Despite their reputation as eating machines, bluefish of all sizes can occasionally be picky. Bait is often the answer, so when I finally snagged an unlucky silverside, I sliced it into tiny chunks and used them to sweeten the trebles on the Kastmasters. With a little blood in the water, the bluefish showed their true colors. In ten minutes we had enough for a meal, pan-fried with a platter of fresh, garden-grown heirloom tomatoes.

Now when I go prospecting for snapper blues, I bring along a frozen scrap of fish or squid, especially if I’ve brought along a potential future fisherman. Usually a small, trout-sized metal lure or a pre-made snapper rig is enough to entice the snappers to bite, but if they need a little encouragement, I simply bring out the bait and act like it was my plan all along.

By Dave “Pops” Masch
From Cooking The Catch vol. II

Snappers are a “snap” to clean. You merely take them in hand and make a diagonal cut behind the head and gill covers, cutting through the backbone. At this point, you should pull the head down, removing it from the body along with the entrails, and “Bob’s your uncle!” You have a perfect little delicacy ready to be coated with seasoned flour and pan-fried to achieve immortality.

Put this mixture, or one of your own devising (I often use half flour/half cornmeal or corn) into a plastic bag, then toss in four fish and shake the bag until they are coated. Remove the fish and cook in hot oil over medium heat until nicely brown and crisp on both sides. Keep the fish warm in a 175 degrees F oven as you fry the next batch. I usually use peanut oil, though canola oil also works fine. Butter is delicious, but you must watch it carefully to keep it from burning.

For me, there is an affinity between fish (especially fried snapper blues) and ripe tomatoes. I often cut a couple medium-sized tomatoes in half, dip the cut edges in the leftover seasoned flour, and sauté them in the same pan as the fish, either simultaneously or when the fish are keeping warm in the oven. When the breading on the tomatoes is nicely browned, I turn them over for a short time to cook through.

Serve this combination with a glass of orange juice, a piece of toast and a cup of coffee, and you will be set to take on the day, even if it doesn’t get any better than breakfast. But who knows, you might get lucky.

These wonderful fresh foods–snappers and real garden tomatoes–are available briefly each year, so get out there and enjoy them while you can. I do not intend to go to my grave having missed a single season of these grand culinary blessings.