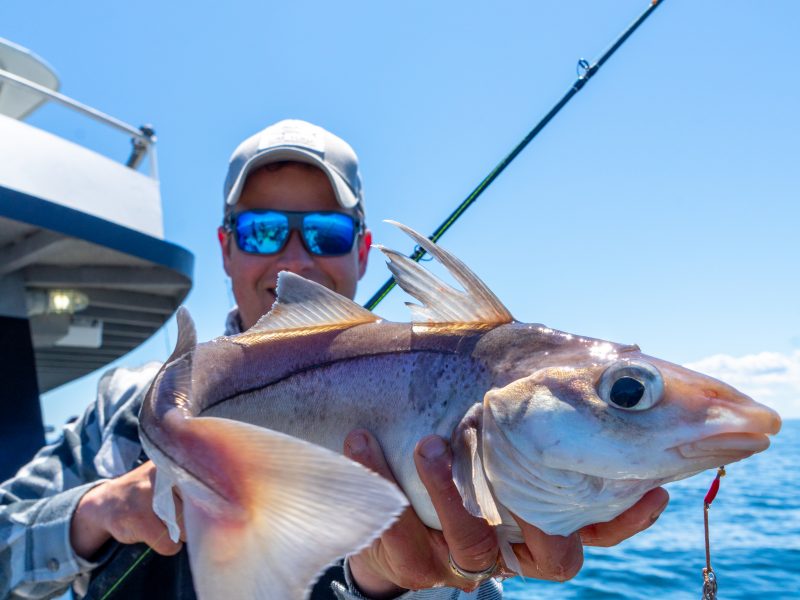 In addition to tuna, stripers, and bluefish, slow-pitching jigging is very productive for bottom-dwelling species, like this haddock, caught aboard the Capt. John & Son out of Plymouth, MA.

I credit the stubbornness of anglers in the Northeast for causing our home waters to be among the last places that newfangled fishing tactics catch on. “This is how we’ve always done it” is what’s kept bucktail jigs and wooden plugs the favorites among striper fishermen. It’s kept diamond jigs, nearly unchanged from their original form, tied onto rods during fall striper and summer bluefish trips. The latest technique to fight for its place on the proving grounds of the cold Atlantic is slow-pitch jigging—and if the cult-like devotion of its practitioners to the south is any indication, it just might catch on.

I found myself sharing the rail with many of these slow-pitch zealots this past spring aboard a three-day trip on the Yankee Capts headboat out of Key West. The trip, hosted by Eric Bunz of the Reel Seat tackle shop in Brielle, New Jersey, took roughly two-dozen anglers more than 100 miles into the Gulf of Mexico to an area known as Pulley Ridge.

On the 10-hour ride out, anglers talked late into the night, showing off their slow-pitch jigs, often hiding them behind cupped hands as they were passed around. One fisherman ran a jig under his nose, as if sniffing a cigar, before pocketing it. The whole atmosphere made slow-pitch jigging feel more like a cult than a fishing technique.

Despite having all the necessary tackle and a basic knowledge of how to use it, I still wasn’t totally sure what differentiated slow pitch jigging from regular old vertical jigging. On the ride out, I heard plenty of examples of what slow-pitch jigging wasn’t, including, “Can you believe Mike fishes bucktails for fluke on his slow-pitch rod and thinks he’s slow-pitch jigging!” Much like poor Mike, I’d packed along several bucktail jigs I intended to use, but perhaps not in front of that crowd. However, by the end of the trip, after catching a variety of snapper, grouper, and blackfin tuna with the gear, I had a much better idea of what slow-pitch jigging was all about. I couldn’t wait to try it on my home waters in the Northeast. I had, if you will, drank the Kool-Aid.

If we’re going to continue the cult analogy, then I should mention the high priest of slow pitch jigging, Benny Ortiz. Though he was not on that particular trip, anglers mentioned his name reverently the entire time, giving the impression I was hearing celebrity gossip more than fishing talk. “Benny loves this color for Pulley Ridge,” or, “I think Benny will be on my trip later this summer,” and, my favorite, “Don’t let Benny know you were using bait!”

Ortiz, a pioneer of slow-pitch jigging in the U.S., and has used the tactic to catch more than 80 species while fishing depths from 50 to 2,000 feet. His seminars and instruction have helped make the tactic more accessible to anglers of all experience levels, and his input has helped tackle manufacturers create lures and gear for the tactic.

What is Slow Pitch Jigging?

Unlike speed jigging, which is meant to imitate a fleeing baitfish and incite faster pelagic species, slow-pitch jigging imitates a wounded or dying baitfish. “The jig is fishing on the fall,” explains Bunz. A falling slow pitch jig shimmies and darts, bobs and weaves, covering a wider area than, say, a diamond jig that mainly falls straight down. This action draws strikes not only from fast-swimming pelagics like tuna, but from slower-moving bottom-dwellers most commonly caught on bait. “It can also trigger strikes from fish that are in a negative feeding mode,” says Bunz. “Fish that aren’t willing to swim through the water column to attack a bait.”

Slow-pitch jigging is also considerably less taxing on the angler than the aggressive speed jigging technique since the jig is at its most enticing as it falls, not as it’s retrieved.

But that description sounds only a bit different than the yo-yo style of vertical jigging that Northeast fishermen have used with diamond and Norwegian lures for time eternal. The difference, however, is in the “system.” 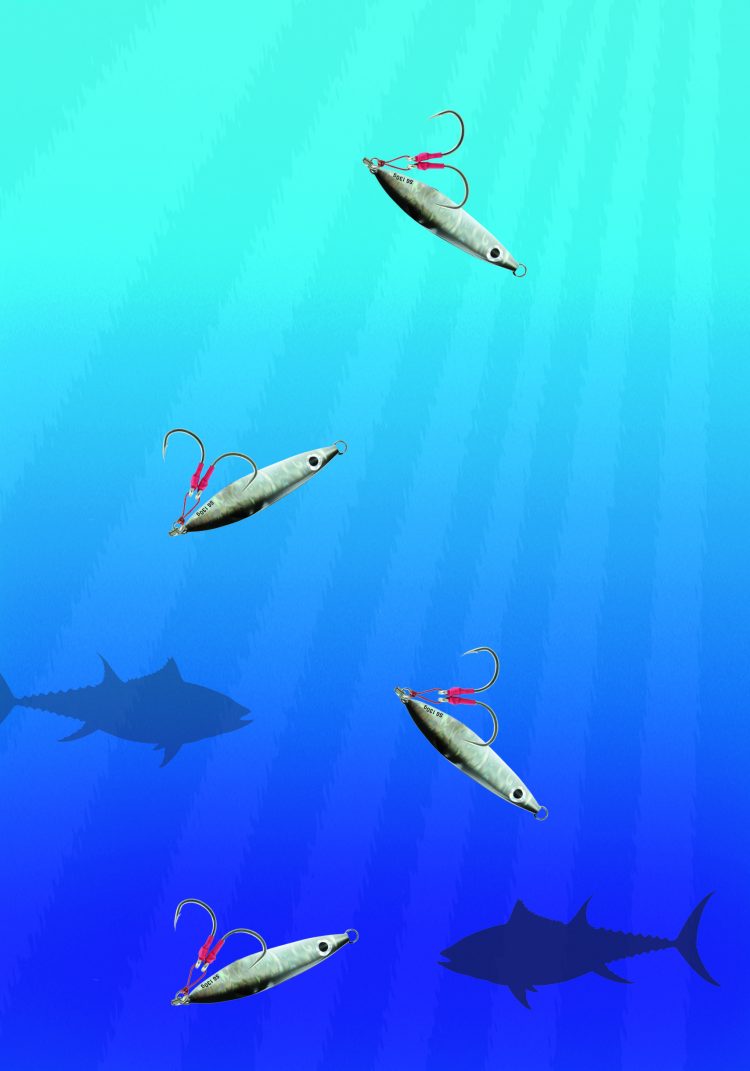 Whereas I can clip a Norwegian jig on to the same rod I soak clams with and still effectively catch cod, proper slow-pitch jigging requires specialized rods and jigs, along with a well-matched reel and line. While that sounds like a clever marketing ploy to sell more expensive rods and jigs (some of which cost more than $30), Bunz put it in a way that made perfect sense.

“It’s more sporting,” he said. For species like black sea bass, where catching a limit is often a given during the season, Bunz said you can either limit out in less than 10 drops with a clam baited high-low rig, winching fish to the surface two at a time, or make a day of it using slow pitch tackle to dial in the bite.

This trend of making bottom fishing more sporting has really taken hold in recent years. Where tog season was once the province of stiff conventionals and big reels, many tog fishermen now ply their trade with lightweight spinning tackle and small tog jigs. Slow-pitch jigging is poised to do the same for black sea bass, porgies, cod, haddock, and pollock.

The slow-pitch jigging system begins with the jig. Bunz explained that the basic description of a slow-pitch jig is a center-weighted, keeled jig. There are variations on that shape, which impacts the jig’s action as it falls, but all slow-pitch jigs follow that formula. On a fully slack line, a slow-pitch jig may glide, quiver, spiral, or dart as it falls, imitating a wounded and dying baitfish—an easy meal that few fish, whether pelagics or bottom dwellers, can pass up.

To get the best action out of these jigs requires the proper rod, which is extremely lightweight, looking more like a largemouth bass rod than a rod capable of beating a tuna. A slow-pitch rod has a leisurely, even recoil that lifts and then “pitches” the jig, allowing it to kick to the side and fall in an enticing way. Most slow-pitch rods are built without a foregrip, which is the cork or EVA section above the reel seat. On most rods, the foregrip aids in pumping the rod to put heat on the fish, but the action of a slow-pitch rod is designed to work the jig, not fight the fish.

The rod, more so than the angler, imparts the action to the jig, which makes slow-pitch jigging far less labor-intensive than speed jigging. A swift turn of the reel handle is enough to load the rod and pitch the jig. Then, once a fish is hooked, the fisherman relies on the power of the reel, not the rod, to turn it toward the boat.

Reels favored for the technique are compact and powerful, conventional ones (often narrow-spooled) or spinning reels that have a good balance of cranking power and a fast retrieval rate. Heavy cranking power is especially important for beating the fish while using a rod that provides relatively little backbone during the fight.

The most serious slow-pitch fishermen commit to memory how many inches of line reel retrieves with each turn of the handle. By counting the turns, they know exactly how far their jig is off the bottom.

“It’s a precision technique,” says Bunz, which is part of the fun. Being perfectly in tune with where the jig is in the water column, and what it’s doing, is one of the most satisfying parts of the technique.

Thin-diameter braids are essential because they allow you to maintain a vertical presentation with lighter jigs. “You want to fish line lighter than what you’re used to,” advised Bunz, who said 20-pound test is the starting point for most of the inshore fishing here in the Northeast.

While slow-pitch jigging is very effective on bottom fish, hungry pelagics won’t let a fluttering jig pass by them either. Chris Parisi of Tsunami Tackle, put Tsunami’s slow-pitch offerings to work on school bluefin tuna last summer. With the fish feeding on sand eels just off the bottom to midway through the water column, 15- to 60-pound tuna were perfect targets for slow jigging with slender, sand-eel-imitating jigs that fluttered enticingly on the fall.

Slow Pitching Jigging in the Northeast

Bunz said anglers have also found it to be extremely effective on the midsummer, midshore run of smaller pelagics off New Jersey, with smaller slow-pitch jigs fooling bonito, false albacore, and chub mackerel.

Stripers are also susceptible to this new tactic, and when bass are eating sand eels on the bottom, Bunz said there’s no more effective tactic than slow-pitch jigging.

Parisi had caught a number of Northeast species while slow jigging, including school bluefin tuna, blackfish, fluke, bluefish, and striped bass, adding haddock to that list aboard the Capt. John & Son.

Most of my groundfishing has been done with traditional cod gear—stout, long rods, large winch-like reels, and heavy jigs or high-low rigs—tackle that is utilitarian, designed to fill the cooler efficiently. Using the featherweight slow-pitch gear allowed me, for the first time, to really feel the fight of a haddock. I detected every one of its headshakes and tailbeats (while still feeling I had enough backbone in case a big cod or stray halibut smashed the jig). It was more fun, without sacrificing much effectiveness. As the day wore on, Parisi and I dialed in the jig styles and cadence that the haddock favored, and by the end of the trip, we were outfishing the anglers using bait.

In that way, slow-pitch jigging tackle feels like a precision instrument, one that brings a greater connection to what your offering is doing underwater and to the hooked fish.

I won’t be too surprised if Northeast anglers are slow to come around on slow-pitch jigging, but I will be very surprised if it never catches on. I can’t wait to slow jig for more of our inshore and offshore species, and though I’ll never fully relinquish my diamond jigs, I’m happy to have another tactic in the arsenal.

Gear to Get Started

Parisi recommends spinning tackle for anglers looking to dip their toes into slowpitch jigging. Tsunami offers a few rods that will feel familiar enough for fishermen just beginning, while still providing the advantages of slow jigging, such as the Tsunami Trophy Slow Pitch 681 Heavy or the Tsunami Slimwave 701 Heavy.

For tuna, Parisi used the Tsunami Trophy Slow Pitch 681 Heavy and the Maxel Platinum Slow Pitch 701 Heavy paired with the Tsunami SaltX6000 or Tsunami Evict 5000. He spooled the reels with 40-pound-test PowerPro MaxCuatro. Bunz favors round-profile conventional reels and recommends the Penn Fathom 10N and Maxel Hybrid 20 for fishermen getting started with slow-pitch jigging. For rods, the Centaur Constellation series is moderately priced and is a great entry point, according to Bunz.

While custom and imported slow-pitch jigs can carry prices north of $50 apiece, Bunz says offerings from Nomad, namely the Gypsea and Buffalo, are excellent options under $20. The Savage Gear Squish Jig is an effective slow-pitch jig as well. There are also a wide range of slow-pitch jig styles available from Sea Falcon, with many of the smaller sizes most suitable for Northeast inshore waters, also priced less than $20.