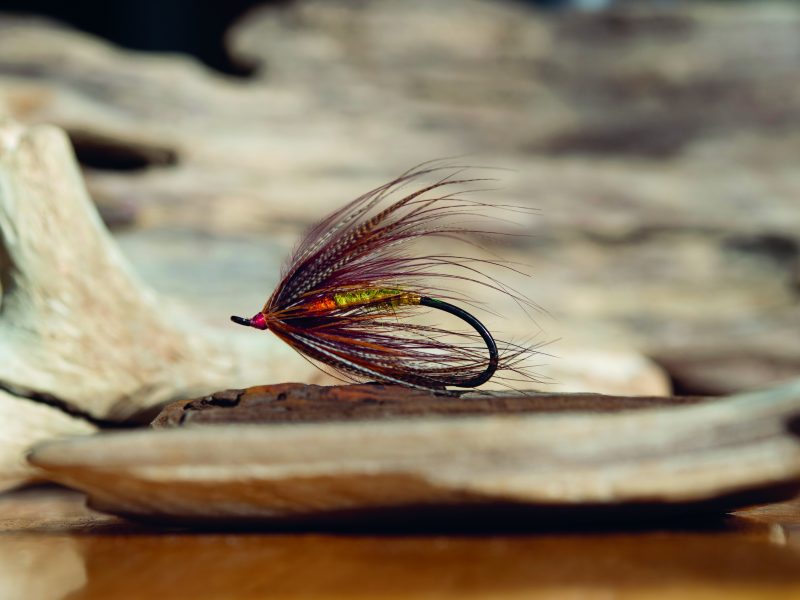 In Scandinavian folklore, a skrat is a mischievous creature with gold and other riches that gets tricked out of its treasure.

Andrew Sponable runs Cobble Creek Outfitters based out of Adirondack State Park in upstate New York. In the autumn, he concentrates on guiding on the Salmon River, one of the most heavily pressured fisheries on the East Coast.

Andrew’s favorite spot on the river is in the Upper Fly Zone. This section of the river has a change in gradient and a few smooth runs, making it a great steelhead holding waterway. Andrew’s pattern was designed specifically for Salmon River steelhead. It works well in spring and fall, but spring is usually better because the steelhead are migrating back to the lake and feeding heavily after spawning.

He said, “The majority of traditional steelhead patterns were developed on the West Coast to fish for their native summer- and winter-run steelhead. These patterns tend to be quite flashy and often come in colors such as pink, orange, yellow, and blue. The Great Lakes steelhead in the Salmon River are heavily pressured and often do not react well to brightly colored flies. This is where the need for a drab or natural-looking fly came into play.”

According to Andrew, “Each material used in this fly serves a very specific purpose. The Alec Jackson Steelhead Iron is a very heavy wire hook that sinks through the water column. This is especially important for steelhead on the Salmon River since these fish hold relatively close to the bottom regardless of what type of water it is.

“The spiky, picked-out SLF Squirrel dubbing body provides subtle movement and gives the fly a very natural “buggy” look. The dubbing absorbs water well and does not inhibit the fly’s sink rate. The gold tag and rib serve as a “trigger” that fish can key in on while looking at the fly broadside or from behind.

“The sparse maroon marabou provides movement to the fly with a great wispy silhouette, while the natural barring and stiffness of the mallard flank helps maintain its profile. The pheasant rump collar gives the fly a natural brown color while adding some extra wiggle.”

Andrew thinks this fly works so well because it is much smaller and sparser than most of the flies used by other anglers. He took all of the unnecessary elements out of it and basically has it down to its core components. As a result, it sinks faster, has more movement, and is quicker to tie.

Andrew recalled, “My most memorable day with this fly was in the spring of 2019 in the lower half of the Salmon River. I started my casting sequence and began stepping down the run. It was merely a half-dozen casts before I hooked my first fish, a smaller 25-inch bright steelhead. About a dozen casts later, another steelhead fell for the Skrat Spey. This one was a larger 30-inch male drop-back steelhead with rosy red cheeks.

“I headed to the top of the run again; another hook-up. I couldn’t believe it! Three passes down the run and three fish.”