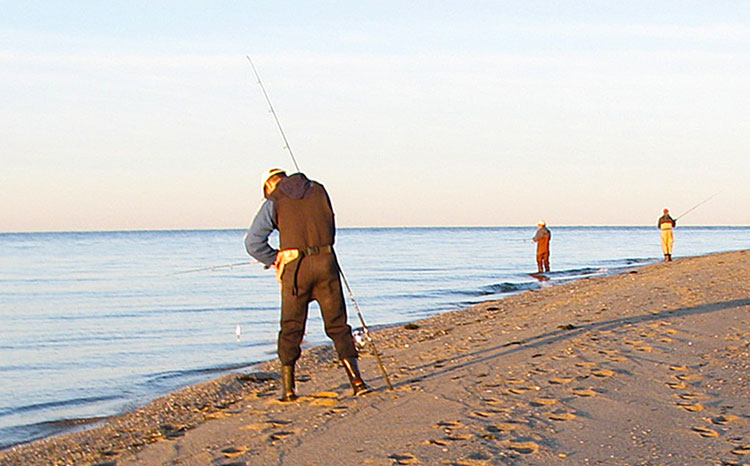 As New Englanders, we are used to seasonal changes. Our lives move in different rhythms, and our towns take on new faces with each season. Nantucket Island undergoes a seasonal change as drastic as any. It is bursting at the seams in July and August with day-trippers, vacationers, summer people, families, honeymooners, the wealthy and the well-dressed bustling from one see-and-be-seen event to the next, and an army of workers tend to everyone’s desires. As Labor Day comes and goes, the steady stream of people slows to a trickle and the seasonal workforce departs. Getting a parking spot in town becomes possible again, Stop & Shop is no longer a congested battleground, and island life in general takes on a more manageable pace.

If asked about their favorite time of year, many locals are quick to point out the virtues of fall. This is probably because many islanders try to make most of their yearly income in a couple of months and fall offers a time to catch their breath. Additionally, fall offers a chance to see Nantucket at its tranquil best and perhaps enjoy some mild weather, well before the “Closed for the Season” feel of winter sets in. Many of the best aspects of summer linger long after the craziness and crowds have departed by ferries and planes. The downtown stores remain open, and most of Nantucket’s world-class restaurants keep cooking well into the fall—reservations become easy to get or even unnecessary.

Fall on Nantucket offers many land-based charms, but the real stars are in Nantucket’s waters, both inshore and offshore. False albacore, striped bass, bluefish, and bluefin tuna will all be embarking on, or preparing for, their trip south, but in many cases, that preparation includes feeding with abandon off Nantucket.

Predicting the patterns and movements of false albacore with any accuracy is a difficult task, but it is a safe bet that they will remain around the island well into October. As the waters of Nantucket Sound, Nantucket Harbor, and the island’s numerous estuaries cool down, baitfish will begin to abandon them. Albies come inshore to intercept the bait and are accessible to both beach and boat anglers.

In the fall of 2011, false albacore fishing was red hot. For boat anglers, Madaket offered the best false albacore action. The normally unpredictable albies could be predictably found busting bait in the cut between Smith’s Point and Tuckernuck Island on the falling tide for several weeks in late September into October. Many of the boats congregating in the cut were fellow captains, fishing for fun. October typically offers plenty of fishing but not too many customers—most of us had rods in our hands enjoying some angling for ourselves after a busy summer instructing clients. The boats started at the Northeast end of the cut and drifted south with the tide. Once near the end of the cut or the breakers on either side, they motored back along the edge of the cut around the other drifting boats. Any impulse to “run and gun” to the busting pods was subdued by the informal yet orderly system, and it probably resulted in better fishing for everyone. Usually every drift out of the cut offered at least one quality shot at a pod of busting fish. I fished an 8-weight fly rod with a floating line, using Bonito Bunnies with a little green-and-blue flash tied in and Skok’s Mushmouths. A fly put into a pod of breaking fish was seldom ignored. It seemed slightly more difficult for spin fishermen to entice bites, but flashy lures like Yo-Zuri Crystal Minnows and Deadly Dicks were effective.

For shore-bound anglers in pursuit of albies, the top of the Galls on the Nantucket Sound side, known as Great Point’s south parking lot, is the key spot. You will need a four-wheel-drive vehicle and a beach permit to access Great Point, but once equipped you can drive right to the fishing; as the name of the spot suggests, there is parking. When you arrive at the beach, you will be facing west across Nantucket Sound or southwest back toward town, and the water drops off very quickly. Within a cast-length from shore, your lure will probably land in 30 to 40 feet of water. Aside from the quick drop-off, there is no obvious structure or rip; it is just a general area where bait tends to congregate in the fall, and it offers consistent shots at albies, both in the form of blind strikes and occasional surface blitzes. Deadly Dicks remain a popular and effective lure choice. I favor a quick but manageable retrieve when blind casting and really kick it into high gear when casting to breaking fish.

The south parking lot is a well-known and popular spot to find albies, so from mid-September through mid-October, you will probably have some company. Most anglers fish directly in front of the actual parking lot, but jockeying for a position in the crowd isn’t necessary. False albacore are not a fish to stay in one spot – if they are present, they will be chasing bait up and down the beach. Don’t hesitate to walk north along the beach toward Great Point or south along the Galls until you have a spot to yourself. A walk or drive across the beach to the ocean side may also produce at times; false albacore, as well as stripers and bluefish, are often found along the ocean side of the Galls.

Point Rip and the tip of Great Point also offer shots to both boat and beach fishermen. While albies will not generally stack up and stay put right in the rip’s edge like a bluefish or a striped bass, they are often found racing around the vicinity. It is a great place to find action on the surface, but blind casting or trolling will also produce.

Or, try Nantucket Harbor as an excellent place to find albies. At times, fish can be found corralling bait up and down along the jetties, especially the east side of the east jetty, and even if fish are not making themselves known, putting in some time casting around the end of the east or west jetty can be effective. Pods of albies busting bait are often found between the jetties, off Brant Point, throughout the anchorage (especially along its north side) and even right off the Steamship Authority Pier or Nantucket Boat Basin. If you are looking for an albie from the beach and making the trek toward Great Point is not an option, trying downtown at Brant Point would be my second choice.

Striped Bass should also be on your radar in October, and the rips east of the island are an excellent starting point. In the height of summer, Quidnet Rip and the Old Man are generally packed wall to wall with bluefish. However, by October there are likely to be striped bass present, perhaps feeding aggressively. Trolling wire line and a parachute jig with a pork rind is a time-tested and effective approach to fishing the rips, but it is not always necessary to use such heavy trolling gear. At times, especially in the fall, you will arrive to a lively rip complete with birds, bait, and stripers on the surface, and they can be targeted with your choice of tackle. Spinning rods with soft plastics such as Hogys are an excellent choice. Large white swimming plugs, such as the Bomber Long-A Magnum in mother-of-pearl, are a local favorite, and Yo-Zuri Crystal Minnows or Deadly Dicks are also a good option, especially if you suspect there are false albacore present. For fly-fishermen, big squid imitations and Deceiver variations are a good starting point.

October can also be a prime month to ply the beaches for stripers. Stripers headed south often pause to feed along the east and south shores, and fish can be found in Nantucket and Madaket harbors well into October. However, late fall fishing has always struck me as more “boom or bust” than other times of the year. In the spring or summer, fishing can be more formulaic. Fish a certain spot, on a certain tide or at a certain time, and you can expect a few bites. In the fall, that assumption goes out the window.

In October, you may arrive at the fishing spot of your choice only to find it empty, cold, and seemingly as lifeless as it will be in February. Or, you may arrive to your spot of choice only to find it alive with fish, gorging themselves with the feverish enthusiasm reserved especially for their trip south. The only answer I can offer is to put in your time and be prepared for either result. You will probably run into some lifeless water, but eventually you will find stripers feeding or false albacore busting bait and be rewarded generously for your time on the water.

In addition to the inshore species, bluefin tuna will remain in Nantucket’s offshore waters into November. Venturing offshore late in the fall is certainly not something to undertake lightly, but if weather allows, bluefin action can be outstanding. Fish of all sizes can be had, and certainly if you are interested in targeting giants, fall is prime time. Local captain and renowned bluefin authority Bob DeCosta said, “For anglers looking to catch a giant, there is no better time or place in the world than Nantucket in October.” (By the way, DeCosta will be available for charter until at least November.)

For those interested in gathering a meal, October 1 marks the opening of family scallop season, a highly anticipated event by locals and fall visitors alike. Nantucket and Madaket Harbors are both prolific bay scallop grounds. Commercial scalloping starts on November 1, but during the month of October anybody with the proper license can gather a basket of scallops for personal use by push-raking, diving or snorkeling.

As the last grains of summer sand slip through the hourglass and the island shifts toward winter, fall offers a time for Nantucketers and visitors alike to enjoy the best of what the island has to offer at a pace more conducive to relaxation and contemplation than the frantic whirlwinds of July and August. While winter may be just around the corner, October still offers a nice mix of tranquility and action – the opportunity to fish in the morning, push-rake some scallops in the afternoon, and enjoy a downtown stroll and dinner at the Club Car in the evening. Don’t quit on the outdoors, fish, or Nantucket too early as October can be sublime!