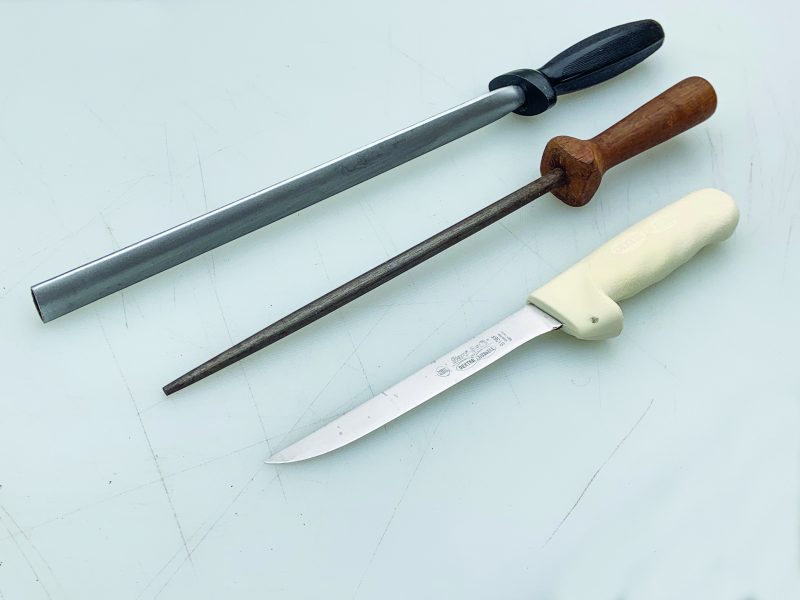 Proper cleaning and care of a fillet knife is essential to keeping your blade sharp and in good condition. The following tips from Carl Abissi of Dexter Outdoors will extend the life of your knife, keeping it sharp for many seasons of use at the cleaning table.

As soon as the fillets are bagged, wash and dry your knife to prevent rusting.

➤Do Not Put Your Fillet Knife In The Dishwasher

The detergent used in dishwater soap is caustic, which is great for cleaning plates and silverware but potentially damaging to the high-carbon stain-free steel used in a fillet knife. In addition, the high heat can damage the handle, especially those made of wood, and the spray bar may knock the knife around, giving it dull spots. To clean the knife, hand-wash with mild-to-medium strength detergent and towel dry.

➤Fully Dry Your Knife Before Storing

Tossing a wet knife into the drawer on the boat until the next trip is a recipe for rust. Fully dry the knife before storing, using a towel, and then allow it to air dry completely.

➤Do Not Store the Knife with Other Metals

Storing a fillet knife in a damp environment with other types of metals (or leaving it soaking in a stainless-steel sink or aluminum pan) can result in rusting and pitting of the blade. Using a knife roll, with other knives made of the same metal, is a good way to store a fillet knife.

➤Use A Scalloped Knife for the Initial Cuts

Sea bass, scup, triggerfish, and blackfish have heavy-duty scales that can dull the blade on a fillet knife. To protect its sharpness, use a scalloped blade to make the initial cuts. Using the fillet knife to poke into and cut the fish not only keeps the blade sharp, it’s also the best way to get the most meat.

➤Wipe Down Knife with Vegetable Oil

For a high-carbon steel blade, after washing and drying, wipe it down with a coat of vegetable oil to help protect it.

➤Use Light Pressure when Sharpening and Honing

Many fishermen use too much pressure when attempting to sharpen their blades. Not only will this dull or damage the blade, but it can also wear out the sharpener faster. A minimal amount of pressure is all that’s needed to maintain and sharpen a knife.

➤Maintain the Right Angle when Sharpening

Even a quality fillet knife is prone to rusting when exposed to salt water. Hands down, the best way to remove rust is with the old and reliable Bar Keepers Friend. This magical concoction has been around since 1882. It was invented by chemist George William Hoffman, after noticing how a rhubarb pie helped remove rust in his steel pie pan. Rhubarb is rich in oxalic acid, which is the secret behind this product’s rust-removing powers.

Simply squirt or pour some of this stuff onto a paper towel, rub a thin layer onto the blade, and let it sit for a minute or two. Then, rub the knife with the paper towel. The rust will come right off! Just make sure to meticulously clean the blade afterward—you don’t want Bar Keepers Friend on your fillets.

➤Why a Fillet Knife Becomes Dull

Under a microscope, a knife’s edge has microscopic teeth, called “feathers.” Through normal use, those feathers bend and break off. To maintain the sharpness of the blade, an angler uses a tool like a butcher’s steel, which is made from a material that’s harder than the knife, to bend those feathers back into place. Over time, it will be necessary to resharpen the blade, a process through which steel is removed from the blade to create a new feather edge.

Article: How to Clean a Whole Striped Bass Without Waste

Video: How to Fillet a Fluke (Flounder)

Video: How to Fillet Scup (Porgy)