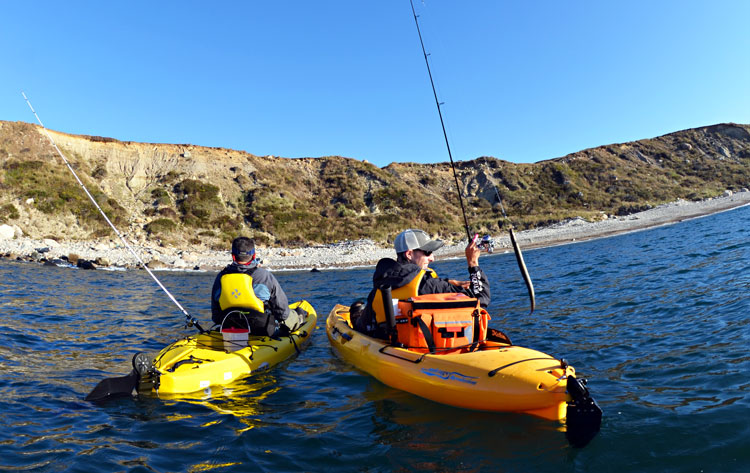 In September, the summer still shows its muscle inshore in the Northeast, but the water temperatures are starting to drop offshore. The southern migrations of all sorts of species are beginning, and we start to see fishing pick up from Provincetown to the Jersey Shore. This special fall run is a great time to be a kayak fisherman: you get to the fish before they hit the beach. The fishing in the bays, rivers and lakes cannot compare to what is available just on the other side of the breakers.

Generalizing about the weather is folly, especially in the fall, but it is safe to assume that the water temperatures will be falling and there will be some perfect days to get the ‘yak offshore. Even a small drop in water temperature is enough to get the fish biting again. Yet, the air can still be warm enough to warrant keeping the dry-wear at home, making kayak fishing much simpler and more comfortable. Take advantage of this time to wear light clothing, but bring a windbreaker and windpants, just in case.

Keep an eye on weather patterns and time your outing well. Days preceding a storm can really turn the fishing on and make for unforgettable days on the water. On the other hand, once a front has passed through, the incoming west winds can lead to smaller surf in New Jersey. These winds make launching off the beach and getting back in as easy as you may experience all year.

Since fluke season ends on September 21st in New York and Connecticut, September 27th in New Jersey and September 30th in Massachusetts, and tog fishing does not start until later in the fall, you will see a large drop off in boat traffic. This not only opens up pressured areas and reefs normally packed with boats, but also lessens the chances of an inattentive boater bouncing off of your kayak. In addition, all the vacationers have gone back home, which means that the auto traffic and the related headaches getting to and from the beach have disappeared with them.

So just what is happening out there on the other side of the breakers? In early September, hit your favorite reefs or structures to get that last punch at a fluke. The bigger fish are out there and feeding heavily at this time of year. Around my neck of the woods in New Jersey, artificial reefs and the Shrewsbury Rocks are stuffed with flatfish and tog. Use larger bucktails or minnow-shaped jigs of at least 2 ounces. Gulp works like a charm, but try using larger styles like the Jerk Shad or the big grubs. This winnows out the smaller fluke. If you want to try for tautog, try using a pencil weight or even a big T-Hex for weight and rig up drop-shot style, which helps with snags.

By September, though, this yakker is about done with bottom fishing. I start to look for the amazing false albacore, striped bass, and blues, instead. They are on the move, and the kayak is a great tool to go find them first and entice them into biting.

I like to surf launch just before dawn. I have a fly rod on board and two medium-sized, medium-strength rods – one for casting and one for trolling. I usually start the day trolling just off the beach and then work my way deeper. Sebile swimmers, Bombers and deep-diving Rapalas are smart ways to start your hunt. I keep a large supply of Ava 007 and Ava 017 jigs and Super Strike poppers on hand for casting. I also keep a good supply of Deadly Dicks, which mimic rainbait, because false albacore love them. Many sharp kayakers troll with the fly rod, as well. This, while not a true application of fly-casting, is a deadly method for finding fish.

As you troll, keep your eyes open for birds, ripples, splashes and boat activity. Pay close attention to your electronics. Not only are adult fish migrating, but juvenile baitfish like spearing and peanut bunker are leaving the back bays in waves. You can spot these tasty bait balls on your fish finder while you are using your kayak to troll up fish.

False albacore are especially susceptible to trolling. The frantic blind casting and furious reeling our surfcasting friends use for these tough little speedsters is not necessary on the kayak; they will readily hit off a trolled offering on the yak, especially a trolled fly like a surf-candy or deceiver. Of course, stripers and bluefish are known to hit a lure on the troll. In the fall, these fish are not bunched up on pods of bunker; they are dispersed and ranging, looking for anything to eat as they head south.

Once you start getting fish on the troll, switch up your rod, swing your legs over the side of the boat, and start casting. Experiment with an AVA, swimming it fast on top, bouncing it off the bottom, or using any combination in between. In the fall, many of my largest stripers struck as I let an AVA fall on a jerk-pause retrieve.

If you are seeing or hearing of albies, bust out the Deadly Dicks. Keep an eye on the terns because they usually follow these speed demons. Try and get out in front of them if you can. This is also the perfect time to throw the fly rod. I like to use a heavy sinking line like Rio’s Outbound T-14 that gets that fly down deep fast. Fighting an albie I have hooked on the fly is just about the most fun I have kayak fishing all year. If the bite dies, pop the trolling rod back in and go look for another mass of fish.

Soon the fall run will begin in earnest. You will see it happen real-time as you start to fish off the beach in the early fall. Instead of reacting to the reports, you will find yourself making them. Every year, when I comment on a September striper or albie, I hear, “Already?” The crowds, the weather, and the fish all seem to cooperate for proactive kayakers in September. Get yourself out there, enjoy yourself, and let us know how you did!