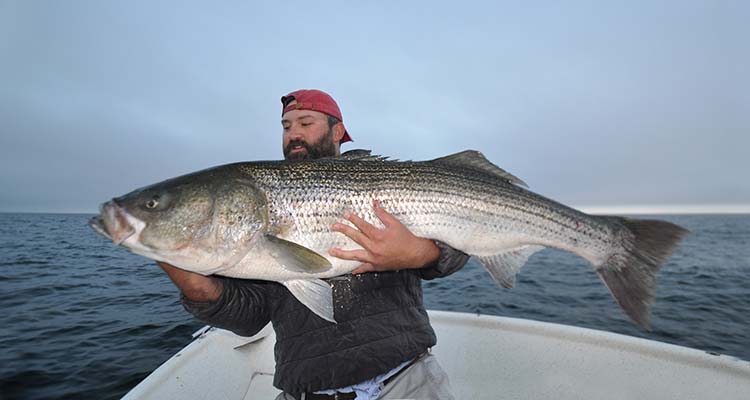 Pictured above: Earl Evans admires the 52-pound striper that fell to a Doc

If you’ve seen a striper attack a Doc, you’ll agree that the fish seems more motivated by anger than hunger, punishing the plug with its tail and snout before engulfing it.

Matt looked over each shoulder, scanning the Lancaster Avenue parking lot at Villanova, before popping open the back of his truck. It was a Friday evening in the early spring, just after mid-terms, and I had no doubt that similar-looking transactions were taking place elsewhere around the campus.

“Here it is,” he said, “but seriously, you can’t tell people about this.”

In his hand was a plain-looking, bone-white lure that, to me, looked like every other walk-the-dog topwater I’d ever seen—just a bit larger.

“It’s not,” he replied, shaking the lure and producing a knocking sound.

That was my introduction to one of the best topwaters—and worst-kept secrets—among striper fishermen, the Musky Mania Doc.

In the decade since that parking lot plug deal, I’ve had no less than ten fellow fishermen tell me about the Doc, and everyone ended the conversation with, “but don’t tell anyone about this.” It felt like I was the only one keeping the secret.

One fisherman claimed that if word of the Doc got out, striped bass would go extinct because the lure’s wide-walking action and knocking noise fool the fish into striking even when they aren’t hungry. “They would all get caught,” he said.

He might be right. If you’ve seen a striper attack a Doc, you’ll agree that the fish seems more motivated by anger than hunger, punishing the plug with its tail and snout before engulfing it.

The Doc is made by Musky Mania Lures, a company founded by freshwater-fishing legend Pete Maina, because he was tired of losing muskies on traditional wood lures. With a wooden lure, instead of the hooks lodging into the muskie, the muskie’s teeth would frequently lodge into the lure, making for poor hooksets. Beginning with the Burt jerkbait in 1992, Maina began designing lures out of high-impact plastic that couldn’t be penetrated by a muskie’s teeth, allowing for better hookups. Musky Mania now offers more than a dozen muskie lures, but it’s the mesmerizing side-to-side action of the Doc that has walked its way into the plug bags and tackle boxes of Northeast striper fishermen.

Fly-fishermen use a hookless Doc to bring stripers into fly-casting range, while surfcasters use it to prospect for bass along rocky and sandy shorelines in calm conditions. If the lure has a fault, it’s that the large distance between the hooks gives hooked stripers leverage to twist trebles and open split rings. Beefing up to tuna-grade hardware is a must for any fisherman targeting trophy stripers with the Doc—which is credited with landing several 50-plus-pound stripers for fishermen from New Jersey to Massachusetts.

The Doc is available in two sizes: the original 9-inch and the 7-inch Li’l Doc. Both lures catch stripers—and presumably muskies—but the smaller version lacks the “pull-a-fish-from-nowhere” magic of the original. The Li’l Doc is thick for its size and doesn’t have the wide walk or loud knock of the Doc.

The 9-inch Doc weighs around 3 ounces and casts well on surf and inshore gear—as long as there isn’t a headwind. It comes in a number of colors, all made for muskie fishermen, so most saltwater anglers stick with the bone-colored “blank.”

Truth is, the Doc’s secret has been out for years. It’s been prominently featured as a striper lure on TV shows, in national magazines, and through countless social media posts and videos. A few tackle shops sell the Doc blanks, and they are available online through Drifter Tackle. You’d be wise to grab a couple for this year’s spring run—just don’t tell anyone about it.