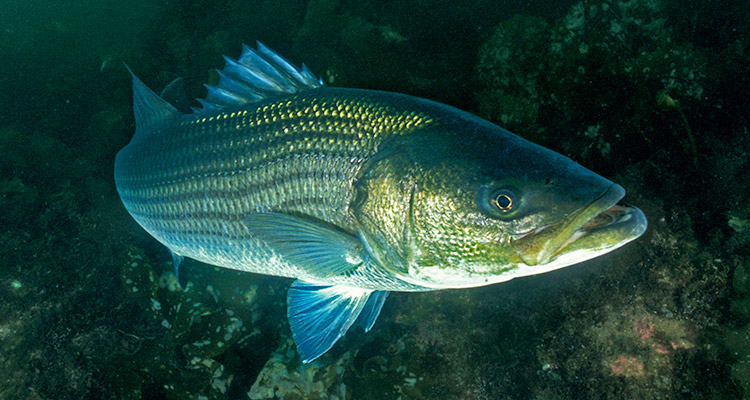 Diving provides a look into a wild, untamed environment and the coast of Massachusetts is always highlighted by amazing encounters with striped bass.

As I slipped beneath the emerald waters off the coast of Massachusetts, the coolness filled my wetsuit, saving me from the intense July heat. With my scuba gear on my back and camera in hand, I descended into the welcoming depths below. I had come to this spot—a secret striped bass fishing ground that I originally discovered while diving for lobster—to photograph stripers.

Diving in only 20 feet of water, I swam to the bottom and began to look for a small crustacean. A tiny crab appeared, so I placed it on my glove, hoping it might catch the interest of a passing striper. It wasn’t long before something caught my eye—that unmistakable glimmer of silver that comes only from a striper—and in my peripheral vision I spotted several silvery forms circling. The feeling I got when spotting my first striper that day is hard to describe, but was the same feeling I get when my fishing line suddenly snaps to life with the first fish of the day.

My excitement built as a couple of stripers quickly darted in to take a look at this stranger in their environment. Slowly, the fish got used to me and began their close passes, hungrily eyeing the small crab still balanced on my glove. I turned my head to see if I might recognize any of them.
“Wait just a minute!” you may be thinking. “Who is this guy? Doctor Doolittle? Aquaman? He’s looking for any of the fish he might recognize? He must be crazy. Stripers are just fish! They all look alike!”

Yes, fish they may be, but allow me to offer you a little more insight into their world. Diving provides a look into an environment still wild and untamed, and for me, diving off the coast of Massachusetts is always highlighted by amazing encounters with striped bass. I have been diving in New England for nearly 15 years, and as I am both an avid underwater photographer and a fisherman, I often take pictures of the same species that I fish. An accurate diver’s log book helps me keep track of the species I’ve spotted, and I record location, temperature, depth and any landmarks specific to a sighting. This information will play a big role in how I formulate my game plan for a future excursion, whether it’s for fishing or photography. I also attempt to record any distinguishing markings on a fish – such as a scar or nicked fin—so that I might recognize a fish if I happen to spot it again. Believe it or not, a second encounter with the same striper can happen.

My striper photography project started about five years earlier when striped bass became more abundant, thanks to effective conservation measures. I used to spend most of my time underwater diving for lobster, and I’d occasionally find myself eye-to-eye with a gigantic striped bass. I always thought the fish were curious about me, a clumsy, bubbling, stick-figured creature with a big piece of metal strapped on its back. It never dawned on me that the stripers were more interested in what I was catching than in me.

A couple of years later, I had an especially unusual fish encounter, one that convinced me of the stripers’ intelligence as well as implying that these fish has personality. I happened to be lobster diving again when I bumped into a striper that began to follow me. That in itself wasn’t unusual because striped bass often follow a diver solely to pick off any small crabs or mussels that pop off the rocks in his or her fin wash. As everyone knows—from the striper handbook of etiquette—an easy meal is a good one. This time, however, I was 30 minutes into the dive and that same striper hadn’t left my side. In fact, it was glued to my side, never more than an arm’s reach away. Every time I’d catch a lobster that was too small to keep, I’d release it. With frantic flapping of its tail, the lobster would dart for cover on the bottom and, just as frantically, the striper would try to catch it. More often than not, my finny companion didn’t get its meal, but its interest was certainly piqued. At 45 minutes into my dive, my newfound buddy was still with me and had quite an appetite for lobster. By now, it had caught at least one or two that I had released.

Incidentally, you might be wondering how striped bass can eat lobster. I have seen them swallow lobster whole, tail-first. I have also witnessed one or more stripers attacking a lobster out in the open, first removing its claws, then breaking it in half, fighting for the pieces. A lobster’s size doesn’t seem to intimidate a striper either—an adult striper can swallow a one-pound lobster whole.

At this point, you may not be that impressed by my experience and, to be honest, neither was I. Any striper worth its stripes will certainly go for an easy meal. However, what happened next truly surprised me. It was the end of my dive and I slowly began my underwater return to the beach. Suddenly, my new friend disappeared. I swam slowly on, trying to catch another glimpse of this special fish. I was a little sad that it had left me but, after all, it’s not like the fish was my faithful companion, like my dog … or was it? Then, just a short distance ahead, there was my buddy, swimming rapidly around the rock in front of me! Was this some kind of a greeting, I wondered? “Is this fish really as happy to see me again as I am to see him?” This silly personification aside, I quickly realized why the striper was so excited—it wanted to use me!

Underneath the rock the fish was circling was a lobster. Coincidence? I wasn’t sure. The lobster appeared to be close to legal size so I flushed it out so I could measure it. This proved to be no easy task, as the striper apparently thought it owned the lobster (after all, finders keepers) and a brief struggle ensued. I won, of course, but the lobster turned out to be too small so I released it. The striper darted quickly toward it, but not quite quickly enough. The lobster made it back under the rock and the striper shot off.

“Now I’ve seen the last of that fish,” I figured. I was sure our lobster confrontation had scared it off. Well, apparently not. There it was again! It swam in front of me, looked me in the eye, and swam off. “This fish thinks it’s Lassie,” I thought to myself. My next thought was, “Well, what have I got to lose?” I swam after it.

There is no doubt in my mind that striped bass possess above-average intelligence (at least for a fish) and what happened next was irrefutable proof, in my opinion: My ichthyic hunting companion had found another lobster and was frantically circling its hideout. By now I had surmised that this was no coincidence. This striper had taken to lobstering, like a pointer to duck hunting, but it wasn’t seeking out quarry to please its master. Definitely not—it used me to help satisfy its own hunger! My gluttonous friend seemed pleased when I flushed this lobster out. After a quick meal of it, the striper tried time and again to lead me, presumably to find more lobster. Unfortunately, my air supply was running low so my experiment had to come to an end.

I now dive in order to photograph both striped bass and the lobster that inhabit our rocky shores. I have traded in my catch-bag for a camera; instead of concentrating on claws and antennae, I seek the perfect striper shot. Photographing striped bass has provided me with several stories similar to the one mentioned above, stories that demonstrate the cleverness of this legendary fisherman’s adversary.

Stripers are almost always curious about divers, but most of the time I think their curiosity is related to their appetites. For example, I once had a 40-inch striper take quite a liking to my camera’s strobe lights. I guessed that since the reflector was silver and flashed from time to time just like a bait fish, why wouldn’t a striper try to fit the whole thing in its mouth? There was a brief fight for my camera and the striper managed to bend the arms of my strobe pretty well in its robbery attempt, but I was determined to keep my equipment.

Photographing these majestic fish underwater presents some unique challenges. Stripers move fast when they come in close, so you’d better have your focus well-set. They also have sides like mirrors, so properly setting your strobes plays a big part in taking good pictures. Finally, waiting for the poses that you want takes patience, time and a warm wetsuit.

Once you locate a spot where you can repeatedly find striped bass that are willing to approach you, don’t forget where it is. Sometimes, divers find multitudes of stripers in places where fishermen don’t have much luck, and vice-versa. It’s almost certain that these fish will return to the same spot again and again, and particular ones may not move far from one locale during an entire summer.

There was a striper at my favorite spot that was distinguishable by a seaweed-covered leader trailing behind him, which I assumed was attached to a stainless-steel hook in his stomach. The amount of seaweed on the leader seemed to indicate that it had been trailing the fish for quite some time. I nicknamed this fish “Green Stripe” because in every picture I took of him, the green stripe ruined the shot. I spotted him many times at that exact site over the course of the next three months. I was always happy to see Green Stripe again, even though he wasn’t my favorite photo subject.

I have witnessed first-hand how proper conservation measures can make a huge difference in the survival of a species, and striped bass have certainly benefited from such measures. There is no shortage of stripers out there now, but I wish similar conservation measures would be applied to the many other species in our waters. They are all deserving of proper management, whether they seem to be a species with a personality or not.

As far as I know, Green Stripe and my lobstering companion are still out there somewhere, or at least I hope they are. So, do me a favor. If you catch a striped bass with a seaweed-covered leader trailing it, or one that coughs up a lobster upon being caught, please release it. That way, I might just see one of them again.

This article was originally published in the February 1998 edition of On The Water. Visit www.EthanGordon.com to view more of Ethan’s amazing underwater photography.