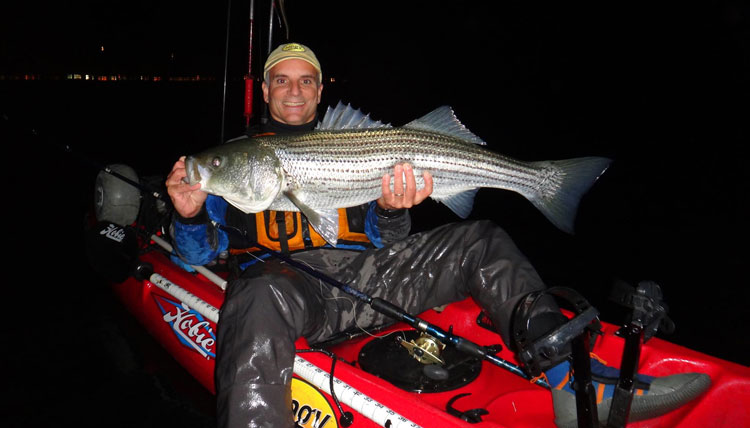 It is hard to believe that another season in the salt is winding down. To say that this season was a disappointment for many of us is an understatement. Along many parts of the coast, water was colder than usual and the masses of stripers stayed offshore. For those lucky enough to have easy access to areas where the bass were congregating, changing weather conditions often moved the fish in and out.

Nobody said it was going to be easy, but after a rough winter last year, summer seemed way too short, and the fishing was often very challenging. Not necessarily challenging in a bad way, however—when you don’t catch as many fish, you gain a greater appreciation for the ones you do catch. I know many kayakers who normally target stripers but instead spent more time catching other types of fish—cod, black sea bass, fluke, and flounder. I’d bet that many kayakers spent more hours targeting saltwater species other than stripers than in the past couple seasons combined.

Stripers hold a special place in the hearts of fishermen that other fish can’t displace. Although it was fun catching a variety of fish, for many of us, stripers are the one fish that will always get us out on the water.

Now that it is the end of the fall, we are getting to the last-chance fishery. The migration is in full force, days are short, weather windows are small, and temperatures are plummeting. The number of fish around at the beginning of October may be impressive, but by the end of the month the water can feel empty. As the number of fish hanging around drops, the fishing gets tougher and bites get more localized. The migratory bite can be very unpredictable, with some crazy swings in productivity as schools of bass and blues go into a frenzy off the beaches and then disappear in a day or two.

Quite a bit has been written about targeting big bass in the fall, but for many of us, this time of year is for smaller fish after the large ones have headed south. There may be a few good bass left in the mix, but most of us just want to catch a few more of them to carry us through the winter.

This is the season for daytime fishing and schools of breaking fish. The young-of-the-year baitfish are big enough to provide stripers with the fuel they need to head south, meaning blitzes can appear in some spots on a daily basis. In many areas, you can drive the shoreline looking for birds and paddle out to schools of fish. The kayak is a great advantage since many of the pods of fish don’t come close enough for shorebound anglers.

Generally, kayaks don’t spook breaking bass like boats do, but it’s always best to approach a school of breaking fish in stealth mode. Come up on them quietly and try to figure out which direction they are pushing the bait so you can let the fish move to you. More than once, just by sitting in the path of the fish and letting them come to me, I’ve had a pod of breaking fish surround my kayak, chasing baitfish up into my scuppers.

Topwater lures are always exciting to fish, and for breaking fish, they are tough to beat for efficiency. The classic Jumpin’ Minnow will produce just about every time. It’s a good idea to keep several different sizes of poppers in your box to match the bait that the bass are chasing. The only drawback to this type of lure is the treble hook, but by crushing the barbs or switching out to a single hook releasing the fish will be easier.

As regular readers know, I’m pretty fond of soft-plastic baits, and they are usually my first approach for breaking fish. This time of year, I downsize the baits as the fish get smaller. One of the great things about soft plastics is that you can carry a variety of sizes to match the hatch and switch the tails without tying on a new jighead. By switching jighead sizes, you can control the depth of your presentation, even going weightless when the fish are up on top. A 9-inch Slug-Go or 10-inch Hogy on a ¾-ounce jighead is great for working under the schools of breaking fish to find one of those last-chance biggies.
For those of us with several kayaks to choose from, this is the type of fishing where you want to focus on ease of launching and speed. Leave the heavy kayak at home and use the one that’s easiest to launch and chase pods of fish with. There is nothing worse than chasing down a pod of fish and having a motorboat run it over just before you get there!

It also helps to go minimalist, with very little rigging and only one or two rods. You may find yourself landing and loading up to move to a different spot several times during an expedition, so spending less time on rigging means more time fishing.

The days are pretty short and not all of us are able to get out on the fish when the sun is up, but the night bite can still be good. If you know areas where the fish break during the day, you may be able figure out where those fish hang at night. They will often line up in a current, not feeding heavily, but may willingly bite well-presented bait. At night, the fish usually aren’t in their summer spots grubbing in the rocks; rather, they are looking for schools of baitfish. Current lines around rips, harbors, or river mouths are very productive and easy to fish with a kayak.

If you can find a good spot with plenty of lights, you might try light-hopping. In the late season, lights are a real magnet for fish because they draw in so much bait. Quietly approaching with topwaters or small soft plastics can provide plenty of action. I don’t do much fly-fishing for stripers, but lights are a great place to do it. A small white Deceiver is easy to see at night and you can often sight-cast to fish cruising under bridge or pier lights.

The season is coming to a close, so now is the time to get those last few stripers of the season. There is nothing like finishing the year with a couple of good trips to carry you through winter!