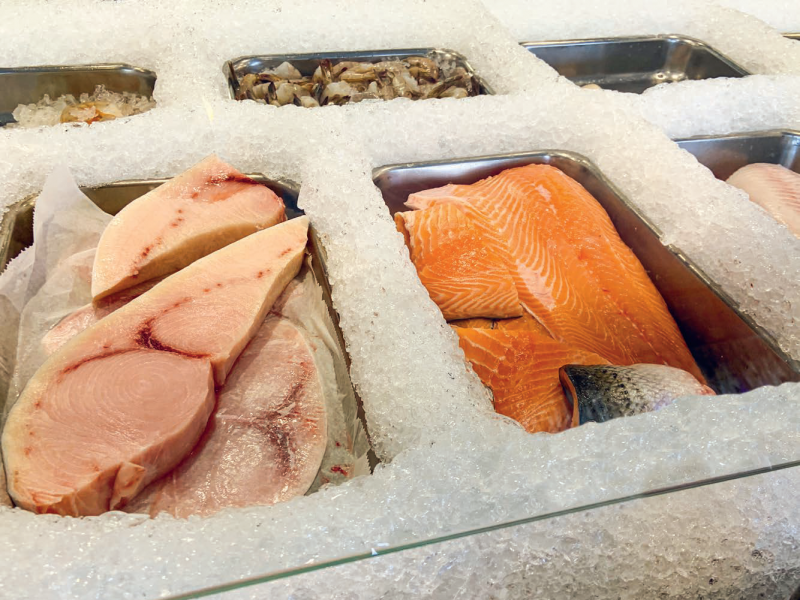 A nonprofit study in 2018 found 20 percent of the 449 seafood samples they tested were imposters.

The other day, I got a hankering for a big bowl of cioppino. I had frozen squid, some gorgeous, frozen, USA-caught U-12 shrimp, a bag of frozen garden-tomato sauce, and a couple-dozen littlenecks I’d dug up the weekend before. (Littlenecks are like garlic in my kitchen – I am rarely without.) I decided some fresh haddock would be the perfect addition to round out the dish, so off to the fish market I went.

The market I usually patronize is top-notch. They buy clams from local commercial shellfishers and make a daily run to a seafood wholesaler in the city, where they sell their clams and buy fresh fish for their display case. The store is impeccably clean, the case is always loaded with a copious amount of crushed ice, and the fillets are cut to perfection. The prices are high, but the quality of their product is second to none.

So, I walked in, placed my order for a pound and a half of haddock, and immediately got distracted by all the other great-looking seafood lurking behind the glass.

That night, when I opened the package, I immediately knew something wasn’t quite right. Haddock is almost always sold with the skin on, presumably so that the buyer can tell that it is indeed haddock. This fillet was skinless and almost three inches thick. Most haddock landed locally weigh less than five pounds, and this fillet appeared to come from a 20-plus-pound specimen.

That’s odd, I thought. If this fillet had indeed come from a haddock, that fish would have been a world-record contender. I inspected it closely and unearthed a miniscule fleck of soft, brown skin. My haddock was actually cod, or possibly hake.

I’ve been buying fish at that market for years and have never been dissatisfied. However, I had never seen the young girl behind the counter before; perhaps she was new and simply grabbed from the wrong pile of fillets. Both haddock and cod are among my favorite fish to eat, although I much prefer haddock in a dish like cioppino since it has a firmer texture and holds together much better when braised or poached. I did not register a complaint with the store since I was partially at fault for not paying attention.

I do not know if I was intentionally duped, or if was just an honest mistake. But what I do know is that mislabeled fish is a widespread problem with seafood in America.

In 2018, Oceana, a marine conservation nonprofit studying seafood mislabeling, published a report that found 20 percent of the 449 seafood samples they tested were imposters. They bought fish from restaurants, seafood markets, and large grocery stores in 25 different states. The samples were then sent to a lab for DNA analysis.

Sea bass and snapper were the most common offenders, and the study revealed fish ordered at restaurants was more prone to mislabeling than fish bought at grocery stores or fish markets.

Sushi restaurants seem to be some of the biggest culprits. Another study done in 2017 by researchers at the University of California found that approximately 50 percent of the sushi sold in L.A. restaurants didn’t match up with what was listed on the menu.

Mislabeling is more common with cheaper, imported fish that is sometimes dubiously sold as “local catch.” This is particularly alarming, considering that the vast majority of fish consumed in the US is imported. Consumers should be particularly wary of any seafood coming from Asia, where large-scale fish farming is loosely regulated.

Rodent filth, drug residue, undeclared allergens, and salmonella are just a few of the health violations that caused the Food and Drug Administration (FDA) to deny large shipments of seafood imports in recent years. And while the FDA is responsible for testing imports, sadly, it’s estimated that less than 5% is actually inspected. This leaves the door wide open for both fraud and greed, and it allows a huge amount of questionable seafood to enter the domestic market.

Mislabeling is not the only fraud being carried out by seafood purveyors. Over the years, both wholesalers and retailers have devised fiendish tricks to get more money for their product, perhaps the most common of which is the practice of “short-weighing.” This can be achieved in several ways. On the retail front, one of the most common techniques is used with live lobsters. When you pull a lobster out of the water tank holding it upside down, its tail acts like a cup and holds quite a bit of water. If the fishmonger quickly pulls out a lobster in that way and immediately puts it in a tub on a scale, you are being duped. When buying lobsters, always keep an eye on the vendor, and make sure you are not paying $10 per pound for water.

Short-weighing is perhaps most common when buying frozen seafood. Wholesalers spray the seafood with water right before flash-freezing it, which adds weight. This tactic is frequently used with frozen shrimp.

Another form of short-weighing involves wet-packing. This is quite common with scallops, which are soaked in a water solution containing phosphates that are used as a whitening agent to keep the product looking fresh longer. But, phosphates also allow the scallops to absorb water and can increase their weight by up to 30 percent. Much of that liquid escapes in the cooking process, causing them to steam in the pan and making it much harder to get a caramelized surface without overcooking. When shopping for scallops, look for “dry-packed” ones, meaning that they were shucked and shipped packed on ice with no chemical additives.

Shrimp has been the most popular seafood in the US for years—it represents more than a quarter of the seafood eaten in this country. Unfortunately, 90% of the shrimp consumed in the US is imported. Beware of shrimp from southeast Asia; many are farm-raised in deplorable conditions, raised on questionable feed, and often loaded with antibiotics. When buying shrimp, look for wild-caught over farm-raised. US-caught shrimp is the best; sadly, it can be tough to find. There is also good wild-caught shrimp coming from South America, which is my second pick. You will pay a hefty price, but at least you will know what you are eating.

I am thankful that we are rounding the corner and a new fishing season is upon us. My trips to the local fish market will become few and far between as the season progresses, and I am very much looking forward to catching my own fish again, knowing exactly what I’m eating, where it came from, and how it was handled. We are blessed with some of the best seafood in the world, so never take that for granted.