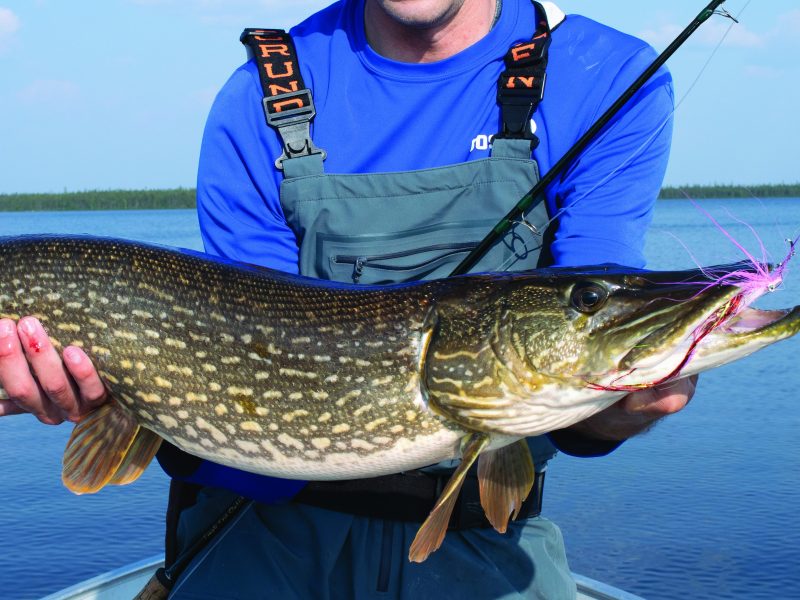 Fly-In to Saskatchewan to Fly-Fish for Pike

Standing on the bench seat in the stern of the 16-foot aluminum boat, I turned my head and watched the fly line unfurl behind me, felt the 8-weight rod load, and started my forward stroke. My orange-and-white bucktail streamer, the pick of a litter of two dozen I’d tied during the winter, dipped and slapped the water for a split second, then whistled past my right ear as I ducked and winced. Forty feet of line and leader fell to the water in a winding path that ended 30 feet away.

My fly-fishing “skills” are a work in progress, but there’s no reason to feel self-conscious when you’re staying at the only camp on a remote lake in northern Saskatchewan and it’s filled with belligerent pike. By the time I stripped in enough slack to move the fly, it had sunk about a foot below the surface. On the second strip, the fly disappeared in a flash of white mouth, and a boil rose to the surface six feet to the right of where my fly line sliced a path toward a thick patch of cabbage weed.

Like dozens of other pike I’d tussled with that week, it saved its best moves for when I had it within a rod’s length, making quick, darting runs under the boat that had me scrambling to clear the outboard. It then rolled on its side and feigned exhaustion, waiting until I leaned over, then went ballistic and threw a bucketful of lake water in my face. Finally, I slipped a hand under its gill plate and held it gingerly as my father lined up the metal measuring stick. Forty inches. A milestone. 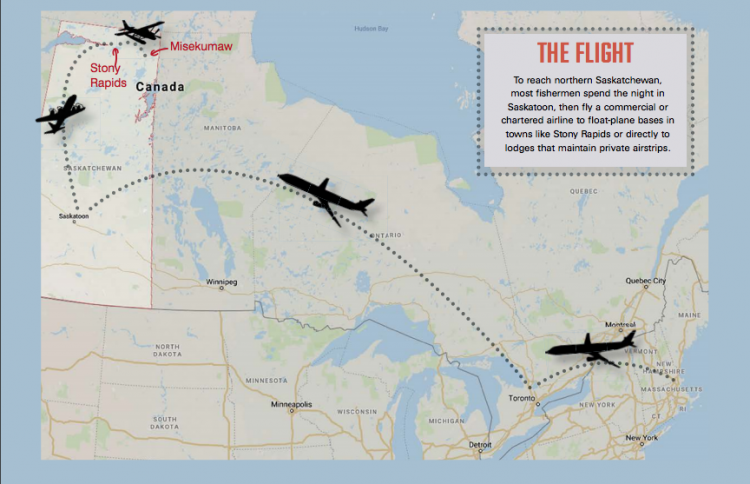 Fly-fishing for Esox, the genus that includes northern pike and muskies, has become trendy in recent years, inspiring new rod, line, and fly designs. Part of the appeal in the Lower 48, particularly when it comes to muskies, is in fooling fish that require hundreds of casts and often follow flies without striking. Across Northern Canada, where thousands of remote lakes are dotted with upscale lodges and rustic outpost camps, it’s less about a challenge and more about tallying as many savage strikes as possible.

The first few weeks after ice-out, when pike crowd into shallow back-bay waters to spawn, the north country. The pike lay up like logs and, on calm days, fishermen can pick out the largest ones and sight-cast to them. July and August, when the shallows warm and big pike move to deeper water, are slower to book and less likely to draw fly-fishermen. However, there remain incredible fishing opportunities for fly-fishermen willing to forego sight-fishing and instead blind-cast to weedbeds and rocky drop-offs. The fish themselves might not be visible, but the fishing is still very visual—you see almost every strike. I’d argue that the heart-stopping sight of a 40-inch just under the surface is every bit as thrilling as dropping a fly in front of a fish lying motionless in two feet of water. And, it doesn’t require nearly as much casting accuracy.

Our group of 11 was booked for the last week of July on Misekumaw Lake, an outpost camp run by Milton Lake Lodge. Milton is a luxury fly-in fishing lodge with a full meal plan, daily maid service, and a guide in every boat. Misekumaw is Milton’s option for self-sufficient anglers who want to cook their own food and guide themselves. The camp consists of three sleeping cabins with 11 single beds and a fourth kitchen cabin. Behind the cabins are two shower rooms with running hot water and a bathroom with a flush toilet. An onsite camp manager keeps the boats gassed up and running, and orients you to some of the lake’s hotspots.

For the past 10 years, the owners of Milton Lake Lodge ran the outpost as a trophy pike lake and booked guests only in June and the first week of July, when pike were still lurking in the shallows. When I booked with the owner, she warned me that pike fishing could be a challenge, as pike lose their teeth in the summer—an outdated myth that fishermen used as an excuse when they failed to catch pike that had moved deep in warm water. The winter before our trip, Milton Lake Lodge was purchased by a former guest, an American named David DeCort. He was aware of Misekumaw’s potential for season-long pike fishing and immediately invested in improvements to the outpost’s cabins and boats. Thankfully, he’s a conservation-minded lodge owner and plans to limit the number of fishermen who visit the lake each year.

For our group, the promise of fishing at a camp that was known to be a pike factory but had received very little fishing pressure was exciting. However, we were a little apprehensive about being the first group in at least a decade to explore the lake in late July. It turned out that we had nothing to worry about.

Misekumaw is a rocky, sandy lake with limited weed growth. When we located cabbage weed beds in 6 to 10 feet of water, we found pike; obvious rocky points and drop offs held pike as well. Narrow areas that concentrated the current of the McIntyre River, which exits from the lake’s western shore, also gave up pike to 43 inches.

Pike fishing on the lakes of northern Canada typically involves working through numbers of fish in the mid-20-inch class, knowing that a trophy-sized fish could appear at any moment. What was remarkable about Misekumaw was the average pike was a solid 34 inches. In fact, we probably caught one pike under 30 inches for every dozen over that mark.

I fished a weight-forward intermediate-tip line from Cortland on a 9-foot, 8-weight Temple Fork Outfitters rod. A heavier rod would have been overkill, and anything lighter would have made it tougher to extricate large pike from the weeds. I found that simple 5- to 7-inch baitfish patterns worked just as well as any of the complex 10-inch patterns I’d brought, and they were easier to cast. Bucktail hollow-tied baitfish were the top producers when fishing weeds. Flashy Clouser Minnows cast toward rocky shorelines and reefs were predictably ambushed just as they were stripped over drop-offs.

When windy weather or arm fatigue forced a break from fly-casting, I did what the rest of our group did and fished with conventional tackle. Spoons, like the classic 4-inch Williams Wabler and No. 2 Len Thompson, were the top producers of big pike. Paddletail swimbaits on ½-ounce jigheads were also productive, especially in open water.

This winter, I’m dedicating one night a week to watching YouTube videos and learning to tie more intricate patterns for pike. When spring comes, I’m going to get outside and work hard on improving my flycasting. By summer, when I return to northern Saskatchewan for another late-July trip, I’m hoping that I’ll be a better fly fisherman—and expecting that it won’t even matter. 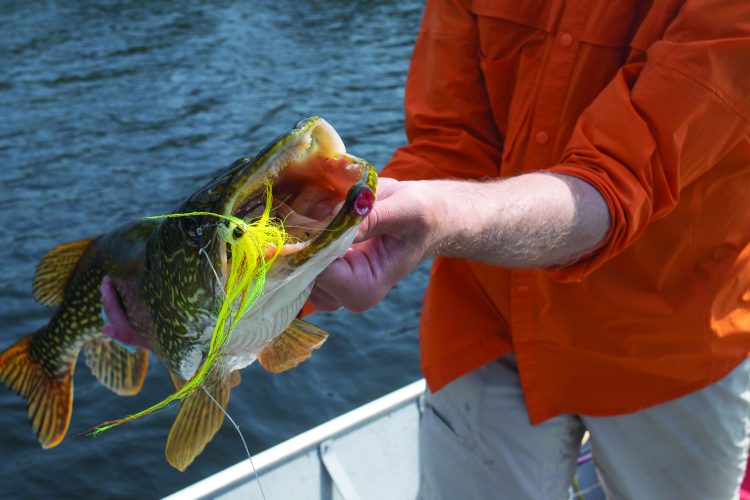