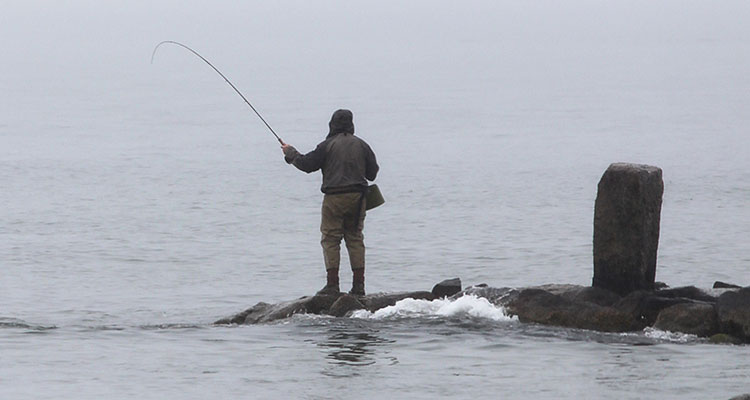 Get fully equipped with a multi-rod system for fly-fishing the surf.

It was just past daybreak at the Misquamicut State Beach in Westerly, Rhode Island as I watched a fly-rodder toss a rowdy popper on a floating line into the shallow water. As I drove to his non-casting side, I said, “If bluefish find that menhaden pod, they’ll blast that popper big time.” He laughed agreeably and replied “I only fish topwater—it’s the most effective way to fish.”

I took a moment and considered how his philosophy was only partly true. Though poppers, sliders, and divers produce violent strikes from striped bass, bluefish, and sometimes false albacore, beach-buggy fly-rodders who exclusively fish one range in the water column, employing one fly line design, are seriously handicapping their chances of hooking up during fast, ever-changing conditions.

I am convinced that fly-fishermen can learn immeasurably from other forms of angling. For example, though there may not be a large amount of overlap between fans of freshwater tournament bass fishing and saltwater fly-rodders, we can take lessons from the bass pros. We can also learn from the serious beach-buggy enthusiasts who fish conventional tackle. Both of these groups of anglers always have several rods rigged, and they catch a lot of fish.

Some fly-rodders might snicker when they see a beach buggy loaded with five or six sticks. However, this is usually not a case of redundancy but of versatility. Each one is likely a different model rigged with a line, leader and lure designated for a certain area of water and particular bait. For instance, one rod might be a light saltwater tool designed for 12-pound-test monofilament and a smaller lure to mimic an anchovy or silverside. Another rod could be more muscular and designed to toss heavier baits, while a third rod might be long and rigged with braided line to punch a bait into a stiff wind.

When I looked at the way surfcasters usually have each rod fully rigged, racked, and available, it became apparent to me that what a beach-buggy enthusiast has in common with a freshwater bass pro is that they both save time and catch more fish by having multi-rod systems at their fingertips. I decided to fine-tune my own fly-rodding system, designed for mobile saltwater fly-fishing.

To keep the system simple, I started with the premise that 9- and 10-weight saltwater outfits cover nearly all fishable New England beach situations. I stayed with the most popular 9-foot length for all my rods, and began with standard 30-pound-test backing on all reels. From there, I developed a three-rod setup, each rigged with a specific-purpose fly line and leader.

The first rod is lined with a floating fly line, the Scientific Anglers 9-weight Mastery Saltwater Specialty Taper. This all-purpose, all-temperature line enables me to power-cast large saltwater surface offerings quickly and to present streamers just below the surface in calm conditions.

The second rod sports an intermediate line, the Rio Coldwater General Purpose Saltwater Intermediate 9-weight fly line. This line will slowly disappear below the chop of the water, providing direct contact with the fly while getting a few feet deeper than the floating line, depending on retrieve and fly. It is ideal for shallow-water venues where stealth is necessary.

The third rod is intended for a steep drop close to the water’s edge, a feature common to many beaches, breachways and inlets. It is rigged with a sinking line, the 10-weight Mastery Uniform Sink Type 5, to get a fly down fast.

Though most every seasoned fly-rodder will want to customize their leaders to match the aforementioned fly lines, I suggest the following guidelines. I use tapered 6-foot leaders with the floating line to help turn over the poppers, sliders, and divers, which are among the most wind- resistant patterns to deal with. Long leaders and bulky bugs are not a good combination, especially in windy conditions, and the fish generally are not leader shy in blitzing or low light scenarios. I use both monofilament and fluorocarbon leaders, depending on water clarity and light conditions, with the tippet ranging from12- to 18-pound test.

A 7- to 8-foot straight shot of 12- to 20-pound test is appropriate for the intermediate line rig; for the fast-sink outfit I use a straight line of 4 to 5 feet. Today’s high-tech rods and lines permit using straight lengths of leader, something that was once ineffective. This approach keeps things simple and has the advantage of fewer knots.

Fly selection is really a matter of personal preference. Consider each line in the system and carry flies to suit the line and fare of the day. If silversides and anchovies are on the scene, be ready to toss those flies with the floater or intermediate. If big bunker, mullet, or mackerel are part of the mix, have those patterns and begin each trip with a different fly on each line, being sensitive to the most likely food source and its location in the water column.

It’s a good idea to knot some flies with a 4-inch wire shock tippet and tie a loop on the end. If I think bluefish will be prevalent, I’ll also tie a 3-inch loop at the end of my tippet and then affix the fly/wire to the leader with a loop-to-loop connection. Using this method, flies can be changed without knots. In fact, sometimes instead of wire I’ll tie mono or fluorocarbon to some flies to enable the same quick exchange.

When transporting three rods, it is imperative to transit them safely while moving on the beach or driving to and from a destination. Every reasonable effort should be made to prevent any damage to the blanks, which could lead to rod breakage in the heat of battle.

I have found magnetic rod racks, or those with suction cups, to be ideal multi-rod transport devices. These racks will safely transport four to six rods at speeds up to 60 miles per hour.

One of the newest rod racks is the Sumo Rod Carrier by Rod Mounts. This rod carrier offers the absolute ultimate in versatility, featuring four independent lever-lock suction mounts. The ball and socket connections and vertical pivots allow tremendous flexibility to mount to any beach buggy. An additional ball and socket connection in the rod rest allows rods to be leveled.

It’s very important to remember that when driving you want the head of the fly to lead the way. Wrap the leader around the reel and hook the fly on the first stripping guide frame. When traveling to and from a beach, keep the reel pouch on the reel to protect it.

When you consider a typical morning of beach fishing, the advantages of a three-rod setup become quite apparent. It’s 5 a.m., and you slowly begin cruising the beach, looking for breaking fish. Spotting a pack of blues breaking in the suds, you hit the brakes and unleash the rod with the floating line and surface bug protected with wire tippet. Of course you donned waders before you began the trip, so you’re casting to breaking blues in seconds. You catch and release bluefish for 20 minutes before they move on. After racking the rod, you take a call from your buddy who says false albacore are running the outside wall of the breachway, feeding on silversides.

You’re only 10 minutes away, so you’re there quickly. Grabbing your second rod with the stealthy intermediate line and small bunny strip fly, you’ve got the ideal rig as soon as you get there. Albie fever can strike any fly-rodder at any time, and you’ve got it now. Knees shaking, you get the fly in the melee. No doubt about it, if you had to swap spools and change flies or leaders, you would have missed this action.

The albies are picky today—your fly goes through them several times with no takes until finally an arm-jarring strike happens in an instant. You clear the line and fight the fish, pleased because any day you hook and land an albie from shore, it’s a great day.

As you climb in your buggy, it’s time to head down the beach where bunker and blues were earlier. You get there and see four buggies leaving. One guy hollers, “You missed it—big blues!” But you know this section has a steep beach profile and the water drops fast off the edge. You know there’s a real good chance some big bass are cleaning up the decimated bunker on the bottom. You’re quickly able to get the bunker fly deep, using the third rod loaded with a fast-sink line and short leader, and when the strike comes it feels for a moment like you’ve hooked into the bottom—but then come the massive head shakes.