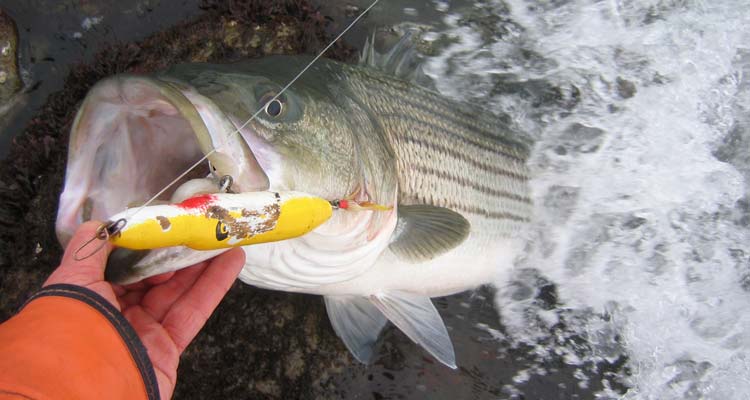 Pictured above: This homemade fat needlefish caught a large keeper in the surf when the stripers were feeding on herring in late November. Needlefish are good plug choice when stripers are on herring.

Over the last few years, the south shore oceanfront of Rhode Island that stretches from Matunuck to Westerly has seen some of the biggest late-season November blitzes imaginable. The trigger is usually a run of sea herring that migrates through Block Island Sound in mid- to late November. Some years, such as in 2016, the run can be epic; in other years, the run near the shore is fair at best. But, there always seems to be some herring around in November.

Watch the skies to determine where the herring are. Gannets, those large, high-flying birds of the gull family, give away the presence of herring as they search the water from high above and then dive-bomb into the schools of baitfish. While it can be a spectacular air show, it is also a dead giveaway that herring or other big bait are present. This often happens out of casting range, but it sometimes occurs right along the surf line, and mayhem breaks loose.

Sea herring are long, thin baitfish that run from about six inches to over a foot in length. They migrate southward along the beaches of South County Rhode Island in huge schools. They have greenish/blue backs that fade to white/silvery bellies, and give off a silvery sheen in the water–important information for the surfcaster who is trying to imitate them.

If you think of light-colored plugs that are long and skinny, you can come up with a good idea of the most effective lures to catch stripers and bluefish when they are feeding on this sought-after baitfish. Plastic swimmers, like Bombers and Daiwa SP Minnows in white or light colors, are great imitations of sea herrings’ appearance and movement. They are especially deadly when the fish are feeding close to shore.

Many fishermen go with light-colored poppers when the fish are on herring. Yes, these have the shape and color of a herring, and work very well — bluefish seem to really go for a topwater plug. A popper, especially a 2-ounce model, will outcast a swimmer and is a good bet for a surfcaster to try when the fish are farther off the shore. Or, a large pencil popper is an even better choice in this situation.

I had one experience many years ago in which a light-colored needlefish did the trick. (Once again, a needlefish plug is the right shape and color, and you can impart any action you want on it.) On this day, the fish were a bit fussy, but a homemade fat needlefish worked on top by twitching the rod tip and swimming the plug on the surface caught many large stripers up to 45 inches. It was the best plug I could have used on that memorable day.

On yet another occasion, I was into a blitz of stripers on herring. But, soon after catching a few fish near the shore, everything seemed to move far out past my range. My swimmer and popper just could not reach the fish. That’s when I saw a guy come along with a long-cast outfit and a large 3-ounce Kastmaster that he could toss a mile. The guy outcast everyone, which allowed him to land his lure right into the feeding frenzy. I saw him catch fish after fish, all keepers, on metal that day. So, stock some metals like Hopkins, Kastmasters, or even large Deadly Dicks. It is yet another option that looks like a herring and casts like a bullet.

An interesting phenomenon that occurs when herring hit the beach in late fall is that most of the visible action seems to take place in the daylight. Late November is a great time to be a daytime warrior since a lot of big stripers and blues can be caught right under a noontime sun. I’ve seen most late November blitzes when the fish are on herring end with the setting sun. When that happens, just about all the fishermen head home right at dark; however, there is a subtle nighttime game that occurs long after the daytime blitzes have subsided.

I like to stick around those areas that see big daytime action. I’ve never hit the intensity of a daytime blitz on herring while night-fishing, but I have landed good and steady numbers of keeper stripers while plugging the same beaches at night that saw all the daytime action. I suspect that many of those large fish that came in close to shore to feed on herring tend to stick around and forage after dark.

Keep in mind, though, that you will have to adjust your approach and the lures you use to be successful at night. There are three plugs in my bag that have worked quite well at night in places where daytime blitzes occurred. I usually use either a light-colored swimmer, a skinny plastic stickbait such as a Slug-Go, or a light-colored needlefish plug. My approach to fishing the beach at night is simply to walk and cast. Make a few casts, take a few steps to the left or right, and repeat. Using this approach, I can often cover an entire beach at night because I generally find no fishermen once I get a hundred yards or so from a parking lot. If I get a hit or a fish, I work that spot for a longer time to see if I can find more.

The swimmer is an easy beach lure to use after dark because it is simple to cast and retrieve. In recent years, I have had very good luck with the Daiwa SP Minnow in a mother-of-pearl color. That plug works well off featureless beaches, and it is a top plug to use in the moving water of an outflow or breachway. Often, when I can’t find fish off the beach, I do well by targeting structure or moving water.

Breachways are prime places that offer moving water to fish at night, especially on the outgoing tides. I know that some of these large fish feeding by day off the beach head to moving water to find food after dark. You will find several outflows that drain coastal ponds along the south shore oceanfront at Charlestown, Quonny, and Weekapaug.

This same beachfront features many areas of structure in the forms of boulder fields, rocky bars, and rocky points that draw bait and predators after dark. Places such as the bars of Matunuck (Deep Hole), Green Hill, Fresh Pond Rocks, Weekapaug Point, and Watch Hill offer rocky structure and good fishing. Swimmers, needlefish plugs, and soft-plastic stickbaits all work well in these areas. Move with caution, as rocks can be slippery and dangerous, especially in a rough surf.

I often fish an all-white Slug-Go in a 7½-inch or 9-inch length after dark. I rig it with a single hook in the head, either Texas style with an offset worm hook or on a corkscrew swimbait hook. Cast this lure out and retrieve it with short bounces of the rod tip while slowly cranking the reel. Along open beaches, I find that many of the hits occur right in the wash, but the Slug-Go is also very effective in areas of structure. While it can be my most effective lure at night, it comes with its negatives. The biggest drawback is that it does not cast well in general and is an even poorer caster when throwing into the wind. However, with a wind at your back, it works great.

With the wind in my face, I usually go with a better-casting plug such as a needlefish. I make my own, so I have a number of different sizes to use depending on wind and surf conditions. The common thread here is that they are all light colored, with white making up the bulk of each plug’s color. Some have green, yellow, or blue tops, while some are all white. I work them the same way I described using the Slug-Go above.

The beauty of the south shore Rhode Island beachfront is access. Many fishermen will simply ride around until they find the bait and/or stripers and bluefish. The entire beachfront is roughly 15 miles and can be accessed off Route 1, which parallels the shoreline, and there are exits along the highway that will get you to shorefront parking lots. Some of the most popular free public parking areas are at East Matunuck State Beach, South Kingstown Beach, Charlestown Beach and Breachway, Quonny Breachway, East Beach, Weekapaug Breachway, and Watch Hill. All of these spots have hosted big herring-induced bluefish and striper blitzes in recent years. With a permit, limited on-beach driving using a 4×4 vehicle is also allowed along some south shore beaches. A permit can be obtained at Coastal Resources Management Council, Oliver Stedman Government Center, Tower Hill Road, Wakefield, RI, 02879 (401-783-3370 or 401-222-3577). Realistically, though, most of the beaches can be easily walked and fished from nearby parking areas.

The late season herring runs and the blitzes it generates can be like the finale to a fireworks display. It happens as herring, bluefish and stripers are all migrating southward at the same time. Some of the best surf fishing the state offers often comes at the end of the season in November, from about Veterans Day until Thanksgiving. I have seen some warm years during which outstanding fishing even extended into December. For those who run with the herring in late fall, expect to catch some of the biggest bluefish and oversized stripers of the year along Rhode Island’s south shore oceanfront. Yes, it can be that good!