Can you Eat Albies?

False albacore, or albies as they are called in the Northeast, are prized gamefish but generally regarded as lousy table fare. The most widely shared “recipe” for albies is the old “cook them on a plank, then throw them away and eat the plank” joke. However, I have heard from at least one reader who has kept and eaten albies and claims they are in fact good eating if treated properly. It’s not surprising, considering that false albacore are in the Scombridae family of mackerels and tunas.

Also, taste in fish is quite subjective (for each person who says bluefish taste gross, there are two more who claim to prefer them to striped bass) and often differs by culture. One of the closest relatives of the false albacore (Euthynnus alletteratus) is the mackerel tuna (Euthynnus affinis), which is found in the Pacific ocean and is the preferred species for the Japanese dish Katsuo Tataki, in which the flesh is seared over an open flame with the skin on.

One of the reasons I wanted to experiment with cooking a false albacore is because they don’t always survive the catch-and-release process. They strike lures with such force that they occasionally catch a treble hook in the gills, which are located far forward in the lower jaw. Such was the case with the albie below, which hit a Daddy Mac jig and was clearly not going to survive to be released. 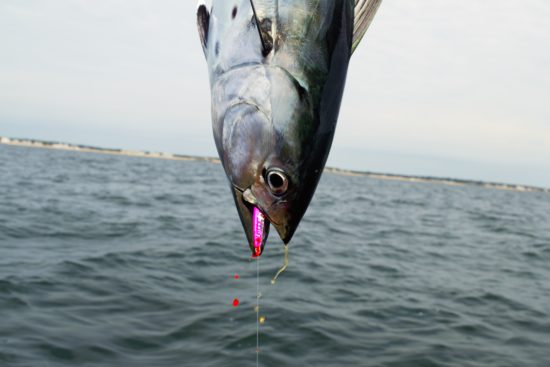 It’s important to handle fish properly if you want the final result to taste good. With an oily fish, such as bluefish, tuna or mackerel, it’s necessary to kill it, bleed it immediately, and get it on ice. After 2 minutes of bleeding in a bucket of saltwater, I iced it down in seawater mixed with plenty of ice to keep the oils in the flesh from spoiling. 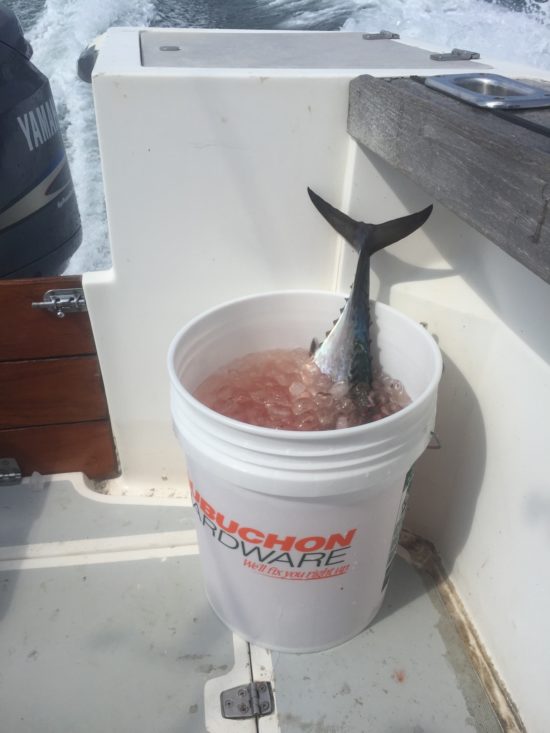 After 20 minutes in the ice bath, the fish were kept on ice in a cooler until they were filleted a few hours later. Albies are easy to clean into four loins, like a mini-tuna. 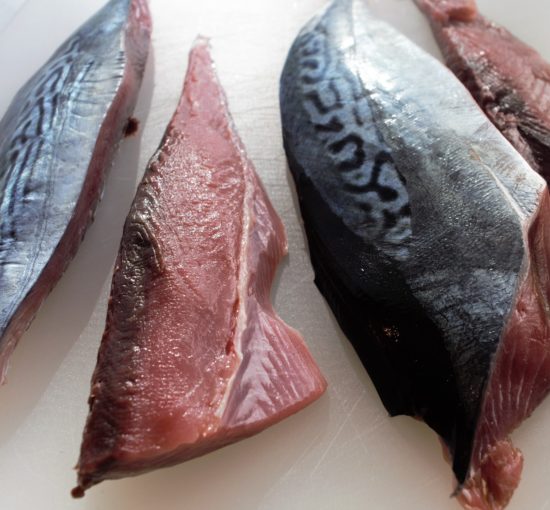 The albie flesh looked very similar in color to most tuna – a bit redder and firmer than Atlantic bonito flesh.  However, the darker meat that runs along the spine had a very unappetizing dark-red/brown color. 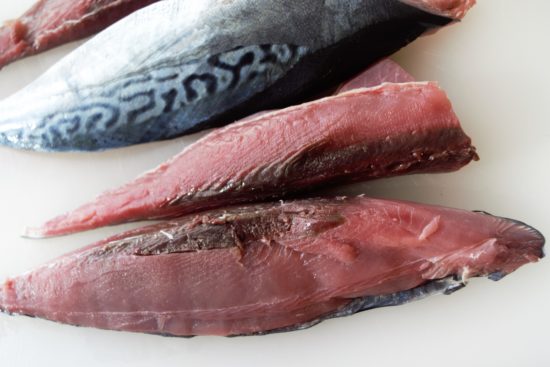 Skinning the fillets and trimming away every trace of dark meat, I was left with four small loins of pink flesh from each albie. It looked every bit as delicious as sushi-grade tuna. 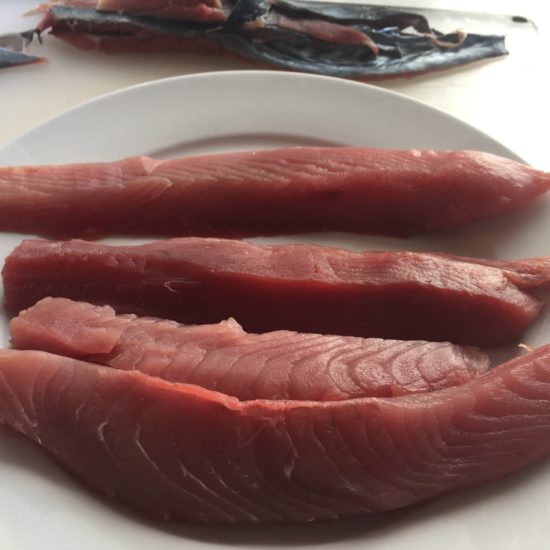 I have seen albies cut for bait (popular for sharks and grouper in Florida) and the meat had a brown, rusty color to it and an overpowering fishy odor. I have to believe that this was a result of improper care and that immediate icing is important to preserving the quality of the flesh. 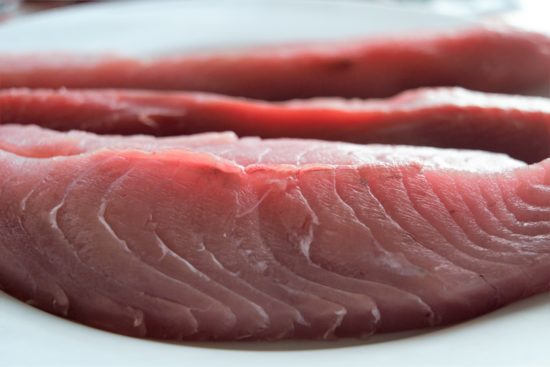 I placed the loins from one of the fish in a zipper bag with a simple marinade that I use on yellowfin tuna: 1/4 cup soy sauce, 1/4 cup rice vinegar, a tablespoon of Sriracha, a tablespoon of freshly grated ginger, and a couple of crushed garlic cloves. 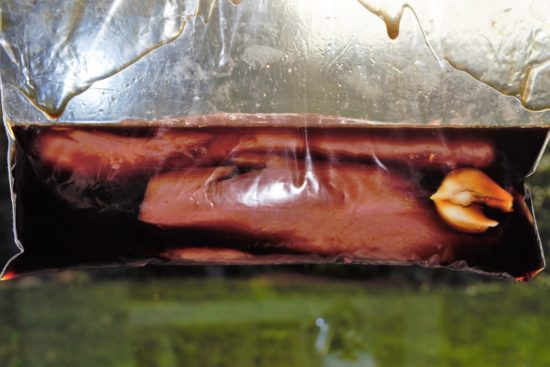 I let the fish marinate in the refrigerator for an hour, and then gave it a quick sear, about 2 minutes on each side, in a blazing hot cast-iron pan with a small amount of vegetable oil. The results looked good – nice color on the outside, and still very pink and rare in the center. It was a little softer than most tuna meat, and the cooked edges flaked and fell apart when cutting through them. 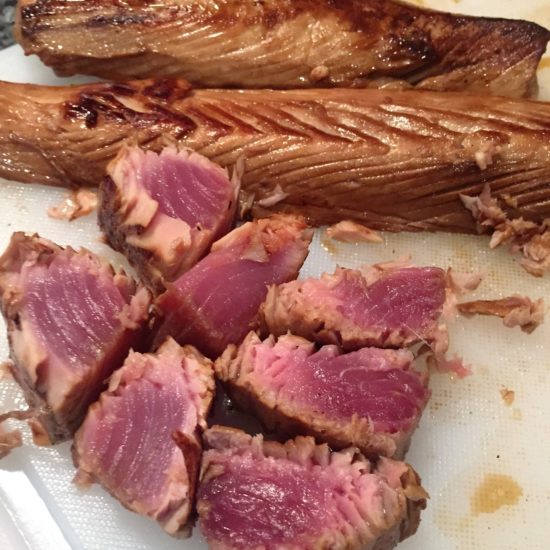 The final result had a taste similar to tuna, probably closest to longfin albacore. I actually preferred it to the touted Atlantic bonito, which I think is a little watery and mushy. There was no off taste, no “fishy” flavor or suggestion of cat food.  It wasn’t just edible – it was a delicious meal with some cold sesame noodles and quick-pickled veggies. 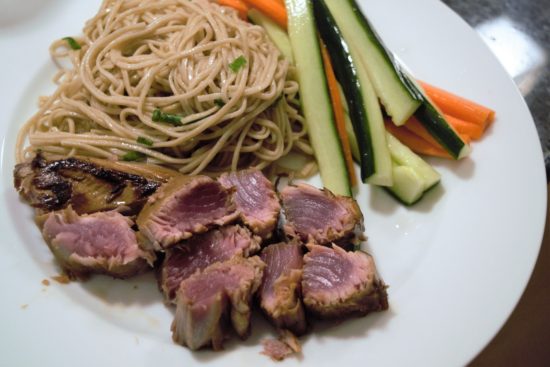