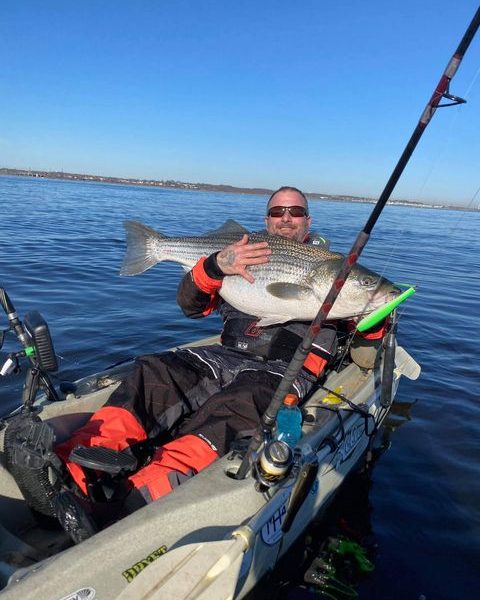 Bobby Read holding a 58-pound striper he caught while fishing in his Hobie kayak.

Launching out of Keyport, Bobby Read was making his first kayak fishing trip of the season for striped bass in the waters of Raritan Bay, an area in Northern New Jersey he has become well acquainted with since it’s close to home.

As water temperatures climb on the Atlantic coast in the spring, large schools of stripers migrate to Raritan Bay to feed heavily in April. When the time is right, they continue their striper migration north, swimming up the Hudson River to spawn in mid to late May, when water temperatures hit 58 to 60 degrees.

The sun was high in the sky and the bay was flat. As noon approached on Mar. 30, Read and his friends pedaled in 47-degree bay water through various depths, trying to find a striper willing to eat his homemade 10-inch wooden lure.

Built with Alaskan Yellow Cedar, Read’s homemade lures can be tuned to swim down to 15 feet deep, creating a formidable target for big stripers searching for food at the bottom of the bay.

While trolling towards a marker in the bay, Read spotted a large baitfish on the surface and decided to turn left to begin working his way back towards his group. During the change in direction, a gigantic striper smashed his stretched Atom 40 lure.

“I told my buddies it’s a solid fish and to give me space,” says Read, who battled the bass for 15 minutes before it finally surfaced 15 feet away his kayak, with both hooks in the striper.

As it broke the surface, one of Read’s friends demonstratively said to him, “I’ve never seen a fish like this in my life!”

With the fish at the kayak and the wind picking up, the fish rolled on its side, signaling the end of the fight. As he prepared to bring the striper in the kayak, it found a second burst of energy, and headed straight back down to the bottoms of Raritan Bay.

After a second fight, Read found the fish at his kayak. “I held it up and everyone says it’s the biggest bass they’ve ever seen,” says Read, who has 9 years of kayak fishing experience.

Using a fish weighing tool called a Boga Grip, he held the striper up to determine its weight. The scale read 58 pounds, topping his previous personal best striper of 52 pounds. Not bad for the first trip and striper of the 2021 season.

As the tide began trickling in, Read revived the striper by swimming it alongside his kayak for several minutes. The fish took the hint, swimming away strong to continue the yearly striper migration to waters in the Northeast.

Read says he and his friends have been using this one lure since last season, breaking 14 personal bests along the way.