Is there anything more exciting in fishing than an explosive surface strike? While topwater baits have been around for decades, companies are certainly not resting on their laurels when it comes to lure improvements. The latest generation of products are designed for ease of use, casting distance, improved action, and good hook-up ratios. Here are what three bass professionals tie on when it’s topwater time.

“With the Cover Pop, I fish it around banks, overhangs, boat docks, and seawalls,” Feider said. “It’s tail-weighted, and I can put it anywhere I put a jig. And, it skips decently for a hard bait.”

The 3-1/8-inch, ½-ounce Cover Pop has an aerodynamic shape that boosts casting distance while reducing splash for a stealthy touchdown. Once in the zone, this durable popper can be retrieved several ways to lure bass from cover and elicit a strike. To work a stretch of water around cover, Feider twitches the rod to impart a side-to-side, walk-the-dog retrieve, adding pauses now and then. When he’s casting to a stump or other isolated cover, he might only twitch the lure a few times through the high-percentage spot before reeling in and cast-ing at the next target.

Feider’s ideal time for a Cover Pop is around the spawn, but its popping and walking appeal still catches bass in summer. On hot, slick-calm summer days, he uses a Cover Pop in open water for its subtle action.

When there are ripples on the water, Feider prefers the Arashi Top Walker. He uses it when fishing long points and flats away from the bank. Its long-distance casting helps reach schooled-up bass or ones busting baitfish near the surface away from his boat.

“I just kind of walk it,” Feider said about the Top Walker. “In places where there are herring, I fish it super-fast, more of a skittering across the surface. That works for smallies.”

He fishes the two baits on a 7-foot medium Daiwa Tatula rod and a Tatula 100 (8.1:1) casting reel spooled with 30-pound Sufix 832 braid tied to a 36-inch Sufix Advance Monofilament leader of 14- to 20-pound test. The mono provides some cushion and floats; it also has enough stiffness to prevent the bait from flipping back and fouling-up in the braid during the cast.

Feider prefers braid as his mainline for several reasons. Castability is one. Another is that braid’s no-stretch characteristic means hooksets don’t need to be as extreme as when using monofilament. Braid helps him avoid yanking a bait out of the strike zone when a bass swipes but misses the bait. Instead, he’s able to keep twitching the bait in the strike zone, giving the fish time to attack again, and setting the hook is as simple as following through with a rod sweep.

The Spro Bronzeye Frog 65 is Rojas’ top bait for covering water quickly and patterning bass relating to duck weed, lily pads and matted vegetation. Here, a typical retrieve replicates a frantic frog skimming across vegetation. When the frog reaches an opening, Rojas often pauses for a moment or two to give bass an easy target to strike.

As bass react to the scurrying frog, Rojas learns where they are situated in the area. Typical patterns may include bass being tight against the bank, holding along the outer edge of matted vegetation, relating to isolated wood or other cover within the mat, relating to specific vegetation, or tucked under mats pushed against docks or shore, to give just a few examples.

“Don’t be afraid to throw it in the ugliest place you’ve ever seen because that’s usually where the big fish are,” the winner of the 2019 MLF event at Smith Lake in Cullman, Alabama, said. “The bait’s designed not to get hung up.”

While the versatile Bronzeye Frog 65 is deadly at catching bass, Rojas also uses the Bronzeye Spit Shad 60 and Bronzeye Pop. He casts the Bronzeye Spit Shad 60 to targets such as pockets in vegetation, sparse lily pads, and grass lines. After splashdown, Rojas walks and chugs the Spit Shad back and forth with less forward movement than a Bronzeye. This keeps the bait in the strike zone longer and draws bass from cover. The Spit Shad’s streamlined profile and vertical “living” rubber tail gives it a unique gliding action. And, as its name sug-gests, its action and colors are baitfish inspired.

The Bronzeye Pop, available in 50 and 60 models, has a cupped lip and delivers a chugging, gurgling action. Some days, this auditory signature and sur-face disturbance is the secret to eliciting savage strikes from largemouth lurking in heavy cover. Like all poppers, its cupped mouth can grab grass, which is why Rojas reserves it for open areas and pockets within vegetation. Walking, popping, and chugging this frog around timber is another deadly tactic.

“I like to walk it through the cover or pencil reeds, and I’ll try and skip it back as far as I can, then work it back out,” Rojas said. “Cadence all depends on water clarity and how aggressive the fish are.”

Rojas stresses using the right gear for the best action and landing per-centages when frog fishing. It begins with a powerful rod outfitted with a fast tip, which is essential for properly twitching a frog to make it walk, push water, spit, and chug. He uses his Duckett Signature Series 7-foot medium-heavy and 7-foot, 2-inch heavy casting rods outfitted with Duckett Fishing 360 Series Reels (7.1:1) spooled with Sunline FX2 60- to 80-pound braid.

“You have to throw a frog on braid, or you’ll end up missing fish,” Rojas said. “I lock the drag down, meaning there is no drag so I can wind the lure in and get it back out, which also increases the chances of a hookup. There’s nothing worse than a loose drag and not getting hook penetration.”

Here’s why:
“In terms of what I look for in a topwater, no matter where I am, I want it to do a bunch of different retrieves so I don’t need to change rods and baits,” DeRose said. The versatile Binksy has a cupped mouth, free-spinning belly blade, and rear prop blade. These features, combined with its unique profile and weight system, allow it to be retrieved with a pop-and-sit, walk-the-dog, or straight-swimming retrieve. This versatility allows DeRose to alternate between these three surface patterns from one cast to another – or during the same retrieve – to trigger bites. Being able to do this speeds up how quickly he can pattern bass and determine their surface bait preferences.

“Pay attention to how they hit it,” DeRose said. “It’s a super-easy way to dial in a pattern efficiently. When straight reeling, vary your speed. Try going from burning it to slow-crawling it. Always vary the cadence because fish moods change.”

DeRose uses the Binksy in open-water scenarios. He casts the bait parallel to rock/grass transitions and inside weedlines in 3 to 5 feet of water for large-mouths and smallmouths hunting along those edges during early morning and evening. In overcast conditions, DeRose also fishes the Binksy over 6- to 8-foot grass flats, using its surface commotion to catch cruising bass.

When specifically fishing smallmouth, DeRose casts a Binksy around high-percentage structures such as points and humps. Using a topwater at smallmouth feeding stations helps him quickly determine whether bass are on a topwater bite or if a subsurface one is better.

DeRose fishes a Binksy on a 7-foot,1-inch IMX-PRO 852C JWR with a Shimano Curado 200K (6.2:1) reel spooled with 14- to 17-pound Sunline Shooter Defier nylon monofilament. He cautions anglers not to use too fast a reel when walking the dog with a topwater. Retrieving too much line eliminates slack, which is needed at the start of a twitch for the bait to dart sideways.

When DeRose fishes cover, he casts a Jackall Gavacho Frog. It, too, can be fished several ways.
“It’s a good skating frog, and by that I mean straight reeling, but it’s an excellent popping frog too, and it walks incredibly well,” DeRose said, adding that the 2/3-ounce bait casts extremely far. “The longer it’s in the water, the more time you have to attract a fish to it.”

DeRose fishes the frog in wild rice, slop mats, lily pads, duck weed and pencil reeds. He also skips it under docks and overhanging trees, then twitches and walks it back out.

When skating or popping a frog, DeRose suggests keeping the rod tip at 11 o’clock.

This tactic helps imparts a good retrieve, but it’s also a difficult rod position for setting the hook. Yes, you read that right. Working a frog with the rod at 11 o’clock forces an angler to lower the rod before setting the hook, and DeRose believes this adjustment takes just the right amount of time to let a bass turn and fully take the bait. Try it and see if your hook-up ratio improves.

While DeRose uses frogs in summer, he doesn’t put them away in the fall. In late September and October, frogs migrate from grassy meadows, hay fields, damp woods, ditches, and areas around small ponds to the muddy bottoms of lakes and rivers where they spend the winter. When the migration is on, bass are shallow and will watch the bank for a scrumptious amphibian to dive in. Casting a frog on shore and hopping it into the water is never a bad idea in autumn when fishing an area close to frog summer habitat.

The thrill of a topwater strike remains popular for bass anglers. But, as fishing pressure increases, bass can become savvy to standard surface bait tac-tics. Trying new, innovative lures and using pro tactics will help you stay ahead of the curve and get more surface bites this season. 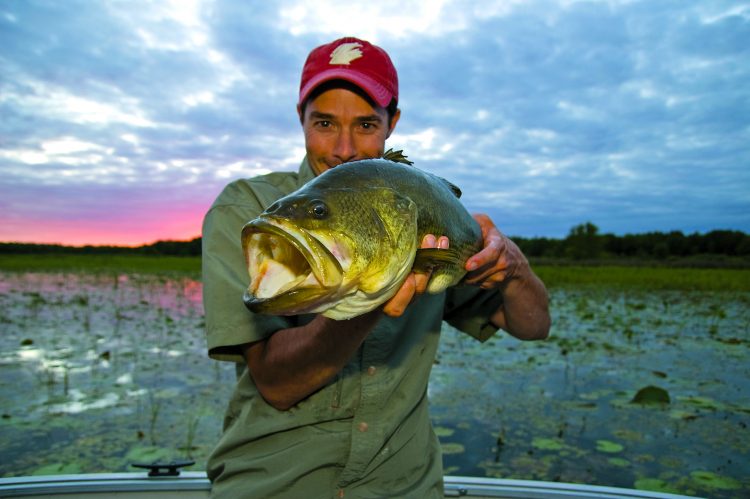