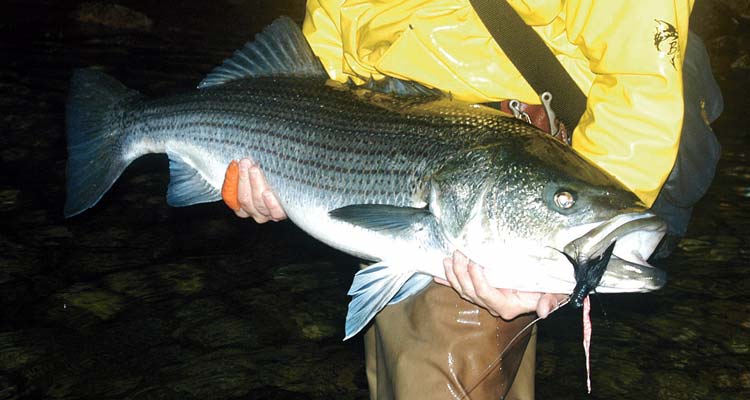 It’s been nearly two years since Uncle Josh Bait Company announced that they would no longer be offering fishing lures made from pork products. This ended a 93-year run of producing pork rind lures that began with Allen P. Jones and Urban Schreiner carving “frogs” out of fatback during a summer when the actual amphibians were tough to come by. The official reason was that pigs today are being brought to slaughter at a younger age, and the fatback and skin that Uncle Josh required was too thin to make durable fishing lures.

Pork rind was (and is) in my opinion, without equal as a bucktail jig trailer. The fluttering action of the natural material can’t be matched by even the most supple soft plastic, but as we enter the second half of the 2017 surfcasting season, my supply of stockpiled pork rinds has reached a perilous low. In May, I found a forgotten rind dried and shriveled on a bucktail jig hook and wept for an hour. I’m exaggerating, of course. I only cried for 45 minutes.

Durability was always the downside of the pork trailers. Forget to return one to the jar after a fishing trip and you’d find it turned to leather the following day. I’ve been experimenting with reanimating these shriveled rinds with limited success, but even after an extensive soak in brine or fresh water, most are simply too far gone.

With my jars of remaining pork rinds countable on one hand, this spring I got serious about finding replacement trailers.

The first thing I considered was raising a pig and making my own trailers. This might work financially if I find a non-fishing friend to split the costs with me in exchange for however much organic bacon and pork chops you can carve out of a two-year-old hog. Still, this sounds like a time-consuming and messy process, but I haven’t taken it off the table just yet.

The most realistic option, of course, is to settle on synthetic trailers, and the good news is that a few companies have produced suitable alternatives to pork rinds.

Otter Tails have been around for several years now. Captain Bruce Millar designed them as an alternative to seaworms when trolling tube-and-worm rigs. The original trailer was cut in a C shape that flaps through the water like the curly tail on a soft-plastic grub. It is made of a soft-plastic-coated mesh that holds the hook well and resists bite-offs from bluefish. The added benefit of the mesh is that it absorbs scents such as bunker oil or the Otter Tails Otter Combo Scent. 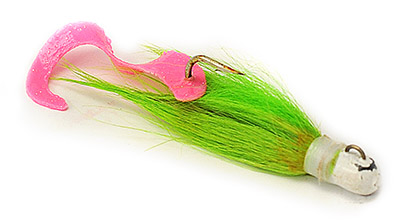 Surfcasters quickly caught on to Otter Tails, and had good luck with them. Nonetheless, the original, C-shaped Otter Tail differs greatly from a pork rind trailer. It doesn’t slow the sink rate as much, and the action is much more pronounced, a constant vibrating as opposed to the subtle flick and undulation of a straight pork trailer. Still, they work well and catch fish, and I’ve been packing them along with my last remaining pork rinds. More recently, Otter Tails came out with straight- and fork-tail trailers in multiple lengths and widths that look promising as pork rind alternatives.

The Fat Cow Fishing Jig Strips have potential as well. These trailers borrow the classic pork rind shapes of the discontinued Uncle Josh products, and make them out of a flexible, durable material. They closely match the flutter of a pork rind, slow the fall of a bucktail jig and, like Otter Tails, won’t dry out. I first used them while bucktailing some surprisingly picky spring bluefish back in May, and the first trailer held up to multiple fish before a short-striking blue sliced it in half. The other casters who were using soft-plastic grubs were replacing their trailers after every fish. Another thing I like about Fat Cow Jig Strips is that they come in the same jars as pork rinds, ensuring that the pork rind holder on my plug bag won’t be “just for show” after my last Uncle Josh trailer gives up the ghost.

Since using these alternatives, I’ve felt much better about my impending pork-free plug bag. The improved durability and wider range of colors more than make up for the slight difference in action between the synthetic trailers and natural pork rinds. After a month of using the Jig Strips and Otter Tails regularly, I have enough confidence in them to squirrel away my remaining Uncle Josh jars for special occasions, new moons, and Nor’easters.