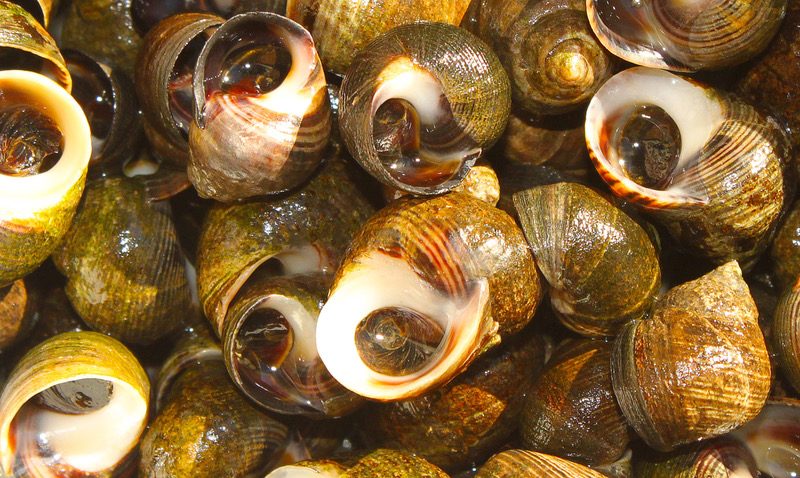 A few years ago, during an unproductive fishing trip to a rock-strewn beach, I had a periwinkle revelation. As I fruitlessly cast out far and wide for stripers that weren’t there, an older gentleman arrived about 50 yards to the south of me. He carefully climbed down through the rocks to the water’s edge, assembled his two-piece surf rod, and then spiked it right in the rocks. Next, he grabbed a 5-gallon bucket, scurried down to the water, bent over, and started frantically picking up small objects and tossing them into the bucket. At first, I thought he might be catching crabs for tautog bait, but it soon became evident that this guy had no intention of fishing. The rod was just a front, a crafty cover-up for his predation of periwinkles.

As I looked down at my own feet, I noticed thousands of good-sized periwinkles clinging to the rocks below the high tide mark. “Why not?” I thought to myself. The fishing was dead, the water was clean, and when in Rome….

I spiked my own rod in the rocks, grabbed an empty sandwich bag from my backpack, and started picking the biggest ‘winkles I could find. As I crept along the rocks, slowly searching for the largest specimens, my eye was caught by a small flash of electric blue. Deep in the base of the rocks, small mussels were also making themselves at home. I’ve lived in this town for close to 20 years, during which time I’ve never come across edible mussels. Apparently I just wasn’t looking closely enough. I’d fished this same beach hundreds of times, yet never once took the time to investigate what was living in the rocks beneath my feet.

Most people are unaware that periwinkles (Littorina littorea) are not native to the East Coast. It wasn’t until around 1850 that these little mollusks first made an appearance in Nova Scotia, and they have since extended their range as far south as New Jersey. There are several different theories about exactly how they arrived here. Some claim they were transplanted in the ballast of sailing vessels, while others claim they were intentionally introduced by colonists who hoped for a dependable source of tasty seafood that could easily be harvested year-round. Whatever the case, the periwinkle is here to stay.

Eating periwinkles has never really caught on in North America, but in Europe they remain a staple seafood dish to this day. In the 1800s, British ‘winkle shops were common, where the creatures were sold for 2 cents a pound. They were considered a common food for common people.

Since periwinkles are considered an invasive species, there are no regulations on harvesting them. They are small and time-consuming to eat, but they are truly delicious and make the perfect free snack from the sea.

To eat them, simply steam them for about 3 to 4 minutes and then toss with some melted butter. Use a toothpick to pry them out of their shells, and remember to remove the small operculum, or foot, that the ‘winkles use to glue themselves to the rocks. The meat should pop out in a single, spiraled, piece. I think their taste is very similar to the sweet and salty flesh of steamer (soft shell) clams, with an essence of lobster. 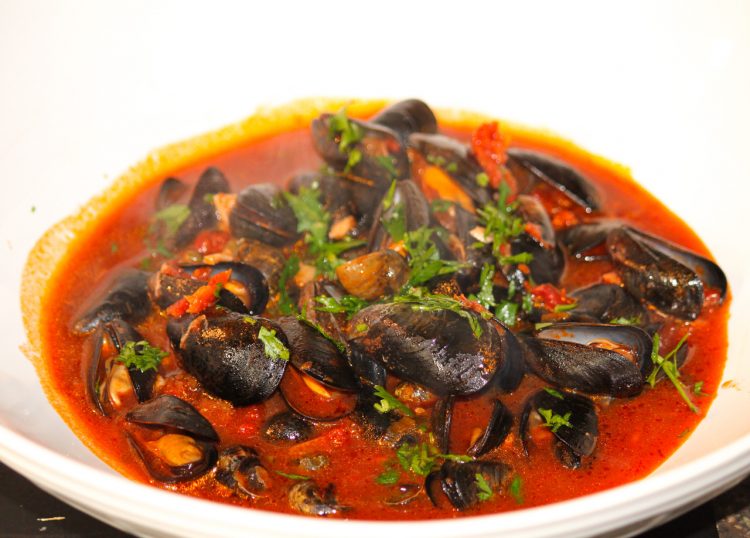 Summer in a Bowl, Italian Style a la Nobska

Heat 2 tablespoons of olive oil over medium heat in a large skillet. Add chopped garlic, onion, and red pepper flakes. Sauté for 2 to 3 minutes until onions are soft, being careful not to burn.

Add tomatoes and bring to a light simmer. Add mussels, periwinkles and wine. Bring back to a simmer and cover, cooking for about 5 to 7 minutes, until mussels start to open. If you need more liquid, add more wine, tomatoes, or even water to keep things juicy.

Once the mussels are fully open, turn off the heat. Add butter and stir. Scoop into heaping bowls and garnish with fresh parsley and olive oil. Make sure you have some good crusty bread on hand. You will not want to miss a drop of the savory broth. Mmmmm….

This article was originally published online in July 2019.

WATCH: Living Off the Land and Sea on YouTube