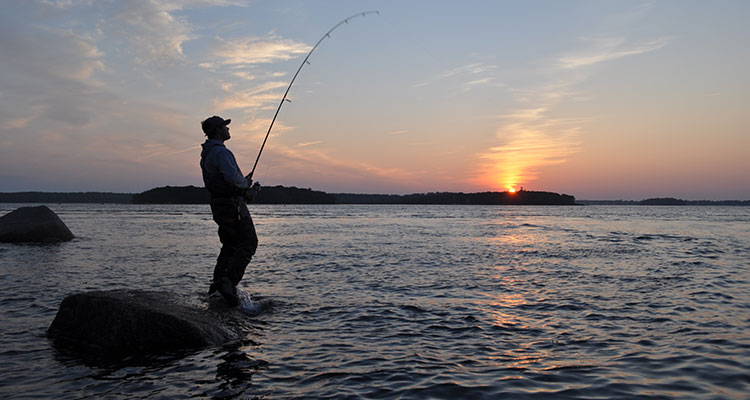 The Two Best Times To Hook A Monster Striper From The Surf Are When The Current Is Running Its Hardest, And When It Isn’t Running At All.

As the outgoing tide picked up speed, a sharp seam formed where the current rushed past a small point inside the inlet. Outside the seam, the tide was humping along at more than three knots, while inside, a swirling eddy was thick with cordgrass picked up by the new moon high tide. I stood downtide of the point with a score to settle.

Four nights earlier, I’d arrived at high slack and cast for three hours without a touch. As the tide peaked, I had my single hit of the night, a soft tap on the bucktail jig as it crossed the current seam. 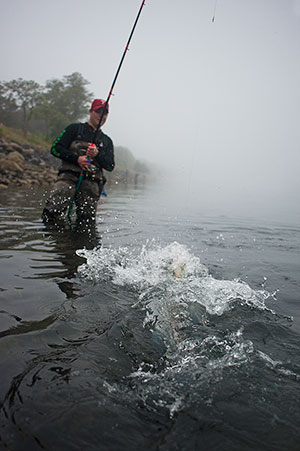 I set the hook and, after a momentary standoff, the fish charged against the current, ripping line from the reel. The fish stopped and shook its head before turning downtide in a huge arc, taking more line. The bass crossed into the eddy and swam directly at me. I reeled quickly to keep the line tight, but when I caught up to the fish, a single headshake was all it took to free my hook from its jaw. I reeled in a basketball-sized clump of grass, cleared the line, and cast until sunrise without another touch.

A similar scenario had played out the night after that, at the same part of the tide, with a frayed main line granting the fish its freedom.

The next two nights had passed without a touch, but with my hopes buoyed by the big new moon tides, I returned. Both of my big fish encounters had come within 20 minutes of peak tide, so I arrived two-and-a-half hours into the drop.

Standing on the ocean side of the point, I cast a 2-ounce Andrus Jetty Caster into the inlet and swam it toward me, with the tide, along the current seam. One the third cast, I set the hook on a barely detectable hit and, a few minutes later, I was removing the jig from my largest striper of the season.

In the striped bass world, the hierarchy is determined by size, and size alone. The largest fish in a school will have the best feeding position. In inlets, rivers, the Cape Cod Canal, and along tide-swept shorelines, the prime feeding spots are behind current breaks. These could be a big rock, a drop-off, or a seam created by a point of land. Big bass will sit in the lee, ambushing baitfish swept by with the tide.

Most current breaks are easy to identify. Submerged boulders will put up a big boil when the water is moving, and rips and current seams create distinct surface disturbances. Holes and drop-offs will require a little more inside knowledge of an area, whether they appear on a chart, you’ve marked them in a boat, or you’ve located them by bouncing a jig along the bottom.

When fishing above the structure, swinging plugs over the current break is the best technique. In heavy current, darters and bottle plugs work best, getting down to the fish and staying there while the current holds them in place. In inlets and the Cape Cod Canal, bouncing heavy jigs down tide, along the bottom and into the structure is another productive Technique. In areas with less current, darters and bottles can still be effective, but needlefish, minnow plugs and jigs join the list of productive lures.

When fishing below the structure jigs become the top choice. Adjust the size of the lure so it’s swimming just over the bottom as your retrieve it with the current, but not dragging. Bucktail jigs, tied with dense hair, are perfect for this approach, as they sink slowly, but wide-bodied soft-plastic stickbaits, like the 9-inch Slug-Go or Got Stryper, matched with a jighead work as well.

While hits on a plug worked against the current can be arm-wrenching, a hit on a jig worked with the current could be easily mistaken for the jig lightly touching bottom. Set the hook hard at any interruption in the retrieve, reel quickly to pick up any slack, and set the hook again.

Thick schools of spearing and silver-dollar-sized peanut bunker had made the schoolies ravenous. No matter what I threw, from my smallest soft plastics to my largest metal lips, 18- to 22-inch stripers hit on nearly every cast. By the time I admitted to myself there’d be no weeding through the schoolies for a better fish, it was too late in the tide to make a move. Employing the ol’ “if you can’t beat ‘em, enjoy ‘em” maneuver, I switched to a lighter rod and a 1-ounce barbless bucktail and made sport of the small fish until the action waned as the tide slacked out.

I picked up the heavier rod again, and reached into my eel bucket, sifting through the lifeless baits that had been pecked to death by the schoolies, grabbing the single lively eel that remained.

With the current at a standstill, I let the eel swim freely, reeling just occasionally to make sure it hadn’t burrowed into the weeds. A few minutes passed when I had a take. It was not the frantic tapping of the small fish from earlier in the tide, but the single, solid thump of a big bass inhaling the eel. I dropped the rod, waited for the line to tighten and set the hook hard.

The fish was on the surface in an instant, its enraged thrashing shattering the night’s stillness. With no current to aid his escape, he changed directions frequently, running first to my left, then my right, and then straight out into the pitch black surf. The hook held long enough for the fish to tire, and after some pumping and reeling, I used my whole hand to grab the lower lip of the 45-pound striper.

A waning tide usually shuts off the bite. Baitfish schools regroup and move, and areas that provided feeding and ambush opportunities to stripers on a moving tide, lose their appeal without current to move the prey through the area. While this may sound like a good time to head home or move to another spot, if you want the best shot at hooking to biggest fish of the night, keep casting.

With slack tide accounting for only 20 to 30 minutes of each tide, a disproportionate amount of my largest striped bass have hit during this window. Slack tide shuffles the deck. Fish that were out of reach while the current was running may move briefly within range. The largest fish often hold so tight to the structure that they never see your lure when the tide was running, but when the current slows and slacks, these fish move out of the structure and into open water, giving anglers a small window to show them a bait.
In general, stripers don’t feed as heavily during slack as they do when the tide is running. Their large, squared-off tails help them overcome the currents that overwhelm their prey. Lacking that advantage at slack tide, the stripers don’t feed as heavily.

While striped bass aren’t as likely to chase down baitfish at slack tide, they will root around the bottom for lobsters and crabs. Being opportunistic predators, big stripers won’t pass up an easy meal, even at slack tide, however, stripers can be pretty picky about which easy meals they choose to eat. When the current is running and a striper must react quickly to a potential meal or let it pass by with the current. At slack tide, stripers can take a good long look at a slow-moving lure before deciding to eat it or let it go, and a fast-moving lure may be ignored altogether. For this reason, the best bet for a slack tide monster is getting down and dirty with bait. A live eel or a fresh chunk of bunker is certain to intercept a slack-tide striper.