Environmental Conservation Officers have been busy along the Hudson River this month, as they enforce fishing regulations. 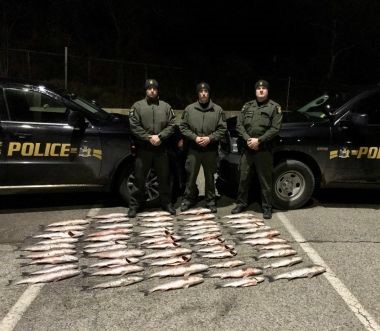 Night Vision Thwarts Illegal Fishing – Westchester County
On March 11 and 12, ECOs Tompkins, Wamsley, and Thibodeau conducted a large-scale striped bass enforcement effort in Westchester County, surveilling multiple areas along the Hudson River. Overnight, ECOs watched as anglers illegally caught fish out of season. Utilizing night vision, the ECOs made contact with anglers claiming they didn’t have any fish. Knowing the individuals were lying, Officers located dozens of striped bass hidden in bags, under rocks, behind logs, and stuffed in exposed root systems of trees. Officers issued 27 tickets to 16 individuals throughout the night and seized 53 striped bass, returning the fish with high likelihood of survival back into the water. Deceased fish were donated to a local zoo.

One of the poachers opted for what I’ll call a “Rockland County Surf n’ Turf,” an out-of-season opossum with a side of illegal striped bass.

There’s Something Fishy about That Meat – Orange and Rockland Counties
On March 6, ECOs in Orange and Rockland counties conducted a detail along the Hudson River to stop illicit striped bass activity. Officers issued 36 summonses for charges including fishing without a freshwater fishing license and taking striped bass out of season. In addition to the fishing violations, officers found an individual in possession of an opossum that the subject admitted to shooting in the parking lot and then cooking to eat. ECOs wrote several citations to the individual for the illegal take of the opossum. Raccoons, red and gray fox, skunk, opossum, and weasel are primarily taken for fur during their hunting seasons from Oct. 25 to Feb. 15, but are otherwise protected under New York State Environmental Conservation Law. Opossums are North America’s only native marsupial, and they help with the fight against Lyme disease by eating thousands of deer ticks and reducing the number of ticks that can spread the disease. Fish seized during the detail were returned to the water to continue the spawning season.

While it’s disheartening to see so many striped bass killed out of season, it’s encouraging to see the regulations being enforced by hard-working conservation officers.