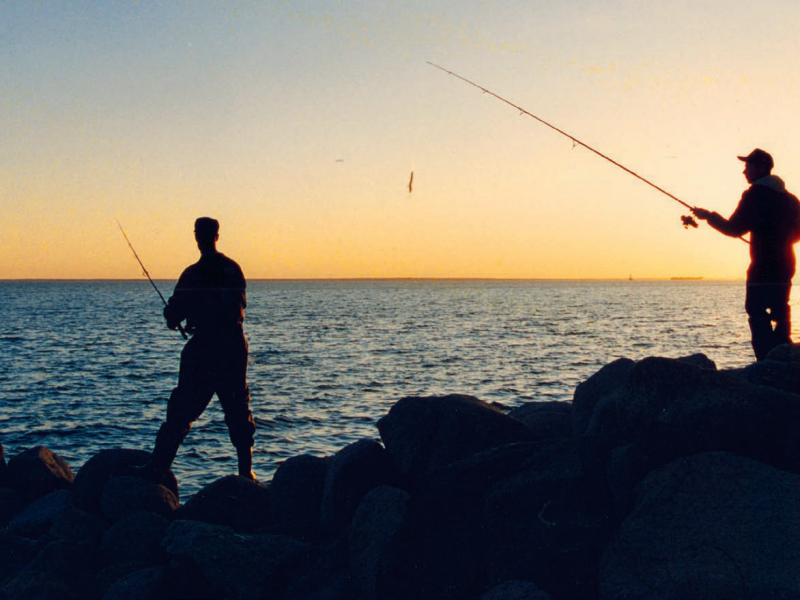 Bill Hough (left) and Chris Megan pose for the first cover of On The Water magazine. This photo was taken in March 1996 on a jetty in Falmouth, Massachusetts.

It was nearly 30 years ago when I first came to the Cape as a young man in my late 20s, looking to take on the world as Director of Sales at The Enterprise newspaper group. I had met Bill Hough through a consultant, and he and his sister, Margaret, wanted to grow the family-run paper that they would soon be taking over from their father, John Hough. My first interview with Bill was nearly five hours long and the two of us hit it off immediately. Within weeks of joining Bill at The Enterprise, we were fishing down the Elizabeth Islands, chasing springtime schoolies in his 17-foot Whaler. I had been to the Cape on occasion, but I had never seen the Elizabeth Islands beyond Woods Hole. All it took was one trip along those pristine shorelines and I was captivated.

I spent the rest of that summer fishing with Bill whenever the two of us could escape, which was usually at night when our children were sleeping. At the time, I had three kids under the age of four and Bill had two under the age of three. We grew adept at going without sleep while slipping in and out of the rocks on his classic Montauk, drifting with the current and casting eels to big bass nestled tight to the shore under the cover of darkness. The twitch of a nervous eel, followed by a bump in the night and the peel of my line, was addicting and the two of us could not get enough of it. There is nothing like the explosion of a big bass in a foot or two of water under a new moon, and that was the feeling Bill and I wanted to capture when we came up with the idea for On The Water magazine.

In the year that followed, we each added another child to our families, and the dream of starting a fishing magazine remained just beyond our reach, but we never lost sight of the swirl of an idea that would become On The Water. At that point, I had four kids under the age of five, and time was a precious commodity, but with a saint for a wife (thank you, AnneMarie!), I worked hard and fished hard when time allowed. I bought my first boat, a 20-foot Shamrock with a straight inboard and full keel, and the dream drew closer. Finally, in 1996, Bill and I had the time and means to start publishing On The Water.

In 2005, Bill gave me the opportunity to become the publisher and sole owner of On The Water while he focused on the growing Enterprise newspapers. I am eternally grateful, and Bill will always be a dear friend. In addition to Bill, there are so many others to thank for helping make On The Water what it is today, including our crew past and present, and the hundreds of contributors who deserve credit for pushing the boundaries of what a fishing magazine could be.

To our passionate audience of anglers and like-minded individuals, we thank you! Thank you for subscribing to On The Water, for tuning in to On The Water’s Angling Adventures, for following our digital and social platforms, for fishing in the Striper Cup, for visiting our retail stores, and for celebrating with us as family at StriperFest.

Over 25 years, you have helped us define On The Water as a place where passion and relaxation exist side by side. Whether it’s a trout stream, sandy beach, or the open ocean, our goal will always be to help you get to the place that, to you, means being On The Water.

So, happy 25th birthday, OTW, and thank you all for making this a soft, mostly dry ride—unlike that 20-foot Shamrock, which I still love!

-Chris Megan, Owner and Publisher of On The Water