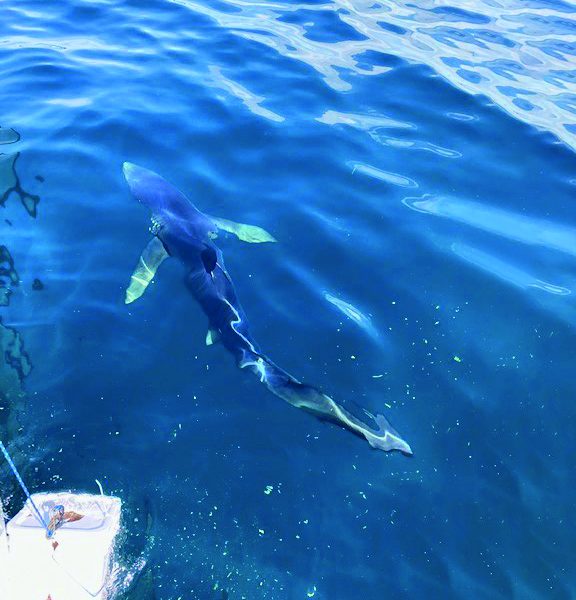 If you’re an East Coast angler, chances are you’re aware that efforts to develop renewable energy in the form of offshore wind power are accelerating at both the state and federal levels. To date, the Bureau of Ocean Energy Management (BOEM), the federal agency that oversees offshore wind development, has awarded 16 leases in the Northeast and Mid-Atlantic, constituting a combined area greater than the size of Delaware. Over a thousand wind turbines may be installed off the coast over the next decade.

There are a host of research efforts underway to understand how these structures may affect our coastal ecosystems and fisheries, be it at the level of an individual wind turbine, a windfarm comprised of dozens of turbines, or coastwide. From an angler’s standpoint, at first glance the most dramatic impacts may be for bottom fish— for example, the artificial-reef effect of the turbine structures may attract species like black sea bass and tautog, providing fishing opportunities. Until recently, however, less attention had been paid to how offshore wind development may impact the distribution of those wide-ranging tuna, sharks, and billfish—collectively referred to as Highly Migratory Species, or HMS—that are so important to recreational anglers along the coast.

Setting the Baseline with Acoustic Tagging

This gap in research did not go unnoticed by Dr. Jeff Kneebone, research scientist at the New England Aquarium’s Anderson Cabot Center for Ocean Life, who in 2018 began engaging with offshore wind developers and regulators regarding the need to look closely at HMS. “It’s critical that we understand how offshore wind development, be it the noise from construction and operation, electromagnetic field generation from transmission cables, changes in currents or water temperature, or the physical structures themselves, affects HMS distribution and abundance, which could, in turn, affect fishing activities,” he explained. To evaluate such impacts, the first step is to understand the distribution of HMS before the windfarms go in the water—the baseline data.

With funding from the Massachusetts Clean Energy Center, BOEM, and the Rhode Island Department of Environmental Management, Kneebone teamed up with Brian Gervelis, a project scientist with INSPIRE Environmental, for a two-year pilot study to assess HMS residency and movements in the southern New England wind-energy areas. “While recreational anglers annually take thousands of trips targeting HMS all across the southern New England region, we decided to focus our research on three particularly popular destinations—Cox Ledge, The Claw, and The Fingers,” Gervelis said.

For 2020, the first year of the study, the team focused on deploying acoustic tags on three species: bluefin tuna, blue sharks, and shortfin mako sharks. The initial step of the project was to deploy acoustic receivers that would “listen” for any fish tagged with acoustic tags, which regularly “ping” a unique identification code and can be detected within about a quarter-mile of a receiver. With help from Capt. Greg Mataronas, a Rhode Island commercial fisherman, they deployed 15 acoustic receivers—five in each of the three popular fishing areas. The acoustic receivers were designed to work together as an array so that individual fish could be tracked across the region.

Then the fun work began: deploying tags. Sailing with Capt. Rob Taylor of Newport Sportfishing Charters and Capt. Willy Hatch of Machaca Charters, Kneebone and Gervelis attached acoustic tags to bluefin tuna, blue sharks, and shortfin mako sharks throughout southern New England. “With a battery life of up to seven years, acoustic tags can potentially give us long-term information about fish before, during, and after windfarm construction,” Kneebone explained. “In addition, when compared to other technologies such as pop-up satellite tags, acoustic tags give us highly precise information regarding movements and habitat use within the region in which acoustic receivers have been deployed.” Another benefit: Numerous other acoustic receiver arrays for a variety of research projects exist up and down the coast, meaning that a tagged fish can be detected by other scientists if it swims into one of those arrays.

“On a local level, we’re working closely with scientists from UMass Dartmouth’s School for Marine Science and Technology and the Massachusetts Division of Marine Fisheries, who have deployed 10 additional receivers around Cox Ledge as part of a cod spawning study,” Gervelis added. “If we detect their cod on our receivers, we’ll send them the information, and vice-versa.”

Offshore fishing is offshore fishing, regardless of whether it’s for research or pleasure, and in 2020, Kneebone and Gervelis had to cover a lot of ground to find their target species. Eventually, they located their quarry and were able to deploy a total of 29 tags: 13 on blue sharks, 8 on shortfin mako sharks, and 8 on bluefin tuna.

With only a year of tagging and detection data complete, they’re already finding interesting results. “Although we tagged most of our fish outside of the lease areas, two-thirds of those fish were detected on at least one of the acoustic receivers,” said Gervelis. Interestingly, half of the bluefin tuna, tagged 40 miles away south of Montauk, were detected by the team’s acoustic receivers on Cox Ledge and the Fingers a month later, demonstrating that these fish are using different areas, including the lease areas, throughout the season.

Looking Ahead: A Long-Term Vision for HMS Monitoring

For 2021, the second and final year of the project, Kneebone and Gervelis plan to once again target bluefin tuna, blue sharks, and mako sharks, while also deploying tags on other HMS of interest, including thresher sharks, dusky sharks, sandbar sharks, and white marlin. Moving forward, they will listen for tagged fish that swim near the arrays (or any other arrays up and down the coast), providing critical information as to how each species uses the areas that will eventually be the sites of offshore wind development. “We’ll be looking at this baseline distribution data in conjunction with environmental variables such as water temperature, the location of the Gulf Stream, and forage fish abundance, which will help us tease apart whether future changes in their movements and habits are attributable to offshore wind activities,” Kneebone explained.

In the longer term, and on a broader scale, Kneebone and Gervelis look forward to improving baseline HMS data across the entire extent of proposed windfarm development, which currently stretches from Massachusetts to North Carolina. “Our ultimate goal is to work with offshore wind developers in order to build a regional HMS monitoring program,” said Gervelis. “We need a consistent framework to monitor the impact of each phase of the offshore wind development process—surveying, construction, operations, and ultimately decommissioning—on HMS. With such a program, along with baseline data in place, developers will eventually be able to understand how certain activities affect HMS, which can then be used to minimize any negative effects on both the fish and the people who target them.”