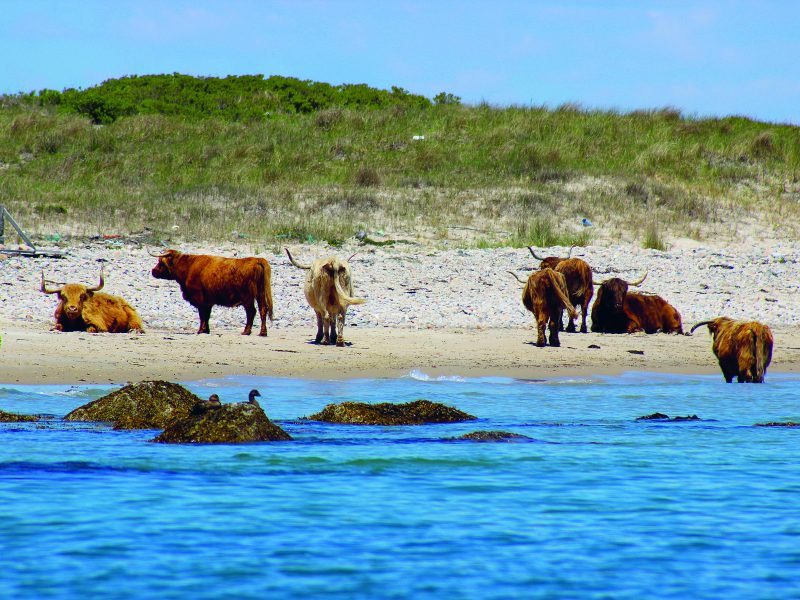 October is a great month for fishing around the Elizabeth Islands, plain and simple. There is no place on Cape Cod where you can see the splendor of fall in all its glory from a boat to the degree that you can around Naushon, Pasque, and Nashawena. I’m not downplaying the special feeling that comes from visiting Nonamesset and Hadley’s Harbor, nor that legendary striper island, Cuttyhunk. However, it’s around these spots that one is often reminded of the presence of humans, even if to a lesser degree than during the height of the summer season. The other three islands hold only whispers of people, with long stretches of shoreline totally devoid of any structure or other evidence that humans have been there. The trees are adorned in foliage that takes on a multitude of color pallets based on what time you are drifting along. The water is changed, with its softness increased on some days and its harshness multiplied when storms throw walls of white water upon her rocks, whether they are boulders that appear to be holding up a cliff or cobble that plays a rustling tune as water rushes in and out.

Each October, the stillness of the archipelago’s waters is disturbed by the frantic feeding of false albacore and their attendant flocks of sea birds. Small disturbances on the surface of the water suddenly turn into maelstroms as peanut bunker and rainbait do their best to escape the albie rushes, both in the water and in the air.

It is much easier to cast from a drifting boat than one with its bow raised to the wind one moment and then dropped from under your feet by the operator ramming the throttle into neutral, never mind the impetuous orders to “Cast, cast, cast!”

If you are lucky, that turn into Robinson’s or Quick’s will reveal a large concentration of feeding funny fish, allowing enough time to gather your wits and set up an approach that lets multiple spin anglers get off good casts.

In boats larger than my small skiff, there is often enough room for three or even four to cast effectively; however, that can be achieved only by having complete awareness of where your lure is at all times, lest it end up in someone else’s anatomy or wrapped around a T-top.

Frankly, fishing for albies in October can be quite peaceful and pleasurable, but that other word that starts with P, “preparation,” is critical. If you are used to tossing high flies with your lures or maybe swinging metals or soft plastics sidearm, putting everyone within a wide radius in danger, then taking time to practice your casting technique with the outfit you are going to use is a really good idea.

It might be easier to do so on dry land, but if you have the opportunity to get in some time on the deck of a boat, you are in luck. Nothing will raise havoc with even an accomplished caster than the unexpected movements of a vessel as it reacts to the seas it rides on.

Although many fly fishermen take great pride in being able to throw a full fly line onshore, an angler who enjoys wielding the long wand would be better off working on accuracy at distances of 50 to 60 feet, with the fly moving immediately once it hits the water. There is no place for letting go of the fly line when sight-casting of any type; the amount of time it takes to get control of the line or freeing it from an obstruction is certain to keep you from enjoying a singing drag. Form an “O” with your line thumb and forefinger, allowing the string to flow freely and give you an opportunity to direct it from the rod butt, reel handle, or other line grabber.

When it comes to fishing for albies, or any other funny fish, I find it totally unnecessary to practice the dreaded “run-and-gun.” I can’t tell you how many times I have put my boat in perfect position to intercept a school of albies or bones, only to have someone race in from who knows where, with everyone on board casting in a frenzy that would be appreciated by the Keystone Cops.

Not only does this tactic scatter the bait and put down the fish, it also results in my boat violently pitching from side to side or even bow to stern, putting those fishing with me in danger of falling (at worst) or being unable to get off a cast (at best) after waiting so patiently.

In my opinion, the only time that running and gunning should be considered an acceptable way to approach a school of fish is if you have the waters to yourself, with no other boats in sight. Hey, I admit that sometimes the gunner gets a cast into the fish first and is the only one to hook up, but I can only hope that somewhere there is a list being kept of those anglers who think only of themselves, with no concern for what is going on around him or her.

The Elizabeths and Woods Hole often have schools of actively feeding schoolies and bluefish, providing excellent chances at a New England Slam. Later in October, it is common for large bonito to make an appearance, adding a fourth species for a “Grand Slam.”

Fishing the wee hours of the morning or in the dark of night is my preferred time to target larger striped bass lurk around all of that beautiful structure down the islands. I realize that I am contradicting my opening, where I extolled the virtues of drinking in the beauty of this area, but it’s a worthy trade.

Live-lining bunker and casting (or three waying) live eels are tough to beat if you are determined to add one big bass to your season. I prefer to stick with artificials and use bunker-size flies or other offerings to coax a big striper into making a mistake. Or, I might dust off the old plugging stick and grab the milk crate filled with scarred-up wood creations from masters such Pichney, Musso, Gibbs, and Hahn, along with some Beachmasters, the more contemporary plug line. Heck, I might even pick up a new pair of waders and leave the boat at home, returning to my roots and memories that were honed during walks along beaches that I typically fished at night, but now must do so while putting my best undercover skills to use.

Ultimately, though, after the fraying of my nerves during funny-fish season, a fall night trip or two is simply an antidote to the madness of chasing fish.

For that reason, I leave you with these thoughts penned by Robert Post in his ode to Vineyard surfcasting and its practitioners, Reading The Water. In this introduction to Kib Bramhall, Mr. Post writes: “Kib loves to fish alone in the middle of the night when it’s so black you can’t see your hand in front of your face. In November 1962, while on the staff of Salt Water Sportsman, he wrote an article called “The World of The Night Surf,” in which he extolled the virtues of night fishing: “To its devotees, night surf fishing is more challenging, more rewarding than its daylight counterpart. It produces more stripers. And bigger ones. Its aesthetics are taken from an altogether different frame of reference and they are intensely poignant.”

There are few better places for such poignant moments than the Elizabeth Islands in October.