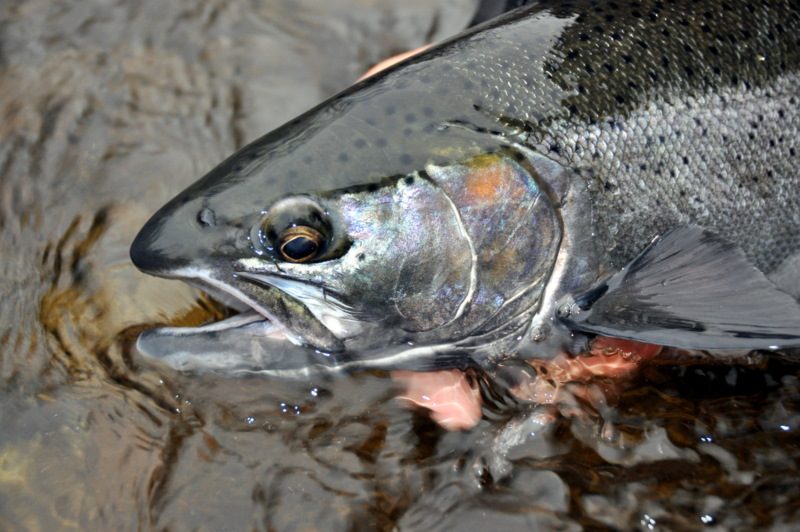 DEC scientists enlisted the help of fish health experts in other agencies and academia to determine the cause of this disorder. DEC staff submitted moribund Salmon River steelhead to the Cornell University Aquatic Animal Health Program for testing. Results indicate that fish pathogens are not responsible for the abnormal behavior and mortality. DEC also sent steelhead samples to the U.S. Geological Survey’s Northern Appalachian Research Laboratory for further lab testing. Results strongly indicate a severe thiamine (vitamin B) deficiency, which means it is likely contributing to the steelhead mortality.

“Lake Ontario steelhead are an important component of Lake Ontario’s sport fishery and DEC is deeply concerned about reports of steelhead stress and mortality in the Salmon River and other Lake Ontario tributaries,” Commissioner Martens said. “Steelhead provide high-quality sport fisheries in the open lake and are especially sought after by anglers who fish in tributaries from fall through spring. DEC staff will continue to work closely with federal agencies, Cornell University and other stakeholders to identify the cause of the current situation and strategies to ensure a robust steelhead population.”

In mid-November, DEC fisheries staff began to receive reports of steelhead swimming erratically in the Salmon River and higher mortality of the species. More recent reports indicate similar behavior in steelhead in other Lake Ontario tributaries.
Steelhead are an important component of Lake Ontario’s sport fishery, which a Cornell University study valued at over $112 million in angler expenditures in New York annually.

Great Lakes fish predators (including salmon and steelhead) that feed primarily on alewife are prone to thiamine deficiency. Alewife, an invasive bait fish in the Great Lakes, are known to contain thiaminase, an enzyme that degrades thiamine. A thiamine deficiency can impact egg quality and the survival of eggs and newly hatched fish, and, in severe cases, can cause the death of adult fish.

DEC is taking steps to meet its spring 2015 steelhead egg-take targets at Salmon River Hatchery, and will work with Great Lakes agency partners to provide assistance in meeting egg take quotas, if needed. Staff from DEC’s Rome Fish Disease Control Unit and Salmon River Hatchery are preemptively injecting adult steelhead returning to the hatchery with thiamine. Thiamine-injected fish will be held in outdoor raceways at the hatchery and fed a diet fortified with vitamin B to improve the likelihood of successful steelhead egg collections in 2015.
However, little can be done to alleviate the mortality of adult steelhead that are unable to ascend the river and reach the hatchery’s holding facilities. Although moderate thiamine deficiencies are not uncommon in top predator fish such as salmon, lake trout and steelhead in Lake Ontario and other waters, this year’s acute deficiency is atypical in its severity. DEC staff will continue to collaborate with experts to further understand the circumstances leading to this year’s mortality.