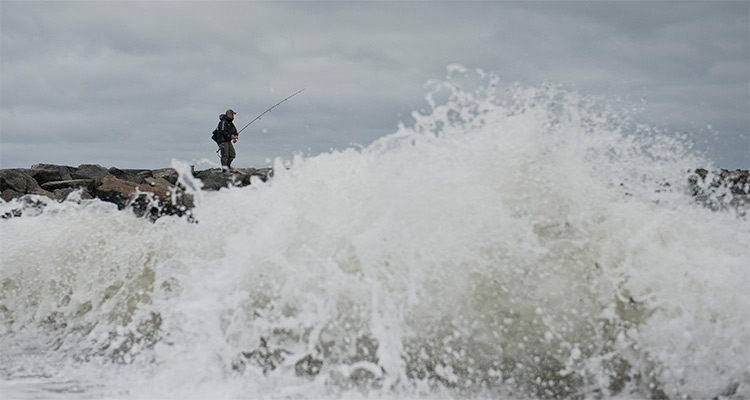 The appearance of the beach had changed drastically since daybreak. A strong nor’easter was building off the coast, and the tranquil scene I’d found hours before changing into a big surf with off-colored water. The jetty that was plainly visible at first light was now totally submerged.

There wasn’t another soul on the beach, in all likelihood because of the unfavorable conditions. I was determined to fish, however. I hadn’t come down to the surf to go home without even making a cast. I debated the best spot to try, finally deciding on the one jetty just large enough to be fishable in the stormy weather.

Article: How to Catch Striped Bass

When I pulled up to view the spot, with only a little optimism, I was pleasantly surprised to find that it was safe enough to fish, though I could expect to get soaked from the wind-driven spray. The outer-third section of the jetty, along the north side, was the only place that I thought I could work a plug with any hope of success. Conditions were tough and my hopes of catching fish were almost non-existent, but nevertheless, I let fly with my plug.

The tumbling surf destroyed most of my plug’s action on three consecutive casts. Then I caught a break. As the series of pounding waves briefly abated for a few moments, I had a short window of opportunity to work my plug enticingly through the white water. After only five cranks on my reel handle, my rod was nearly snatched from my hands. A big striper ripped into my surface swimmer and was using the turbulent ocean currents to beat up on my equipment.

I held on, hoping my inexperience battling big fish in the surf would not prevent me from landing the fish. After a harrowing 10 minutes of stumbling along the jetty to get to the beach, while watching the fish go back and forth in the strong undertow, I eventually slid the bass onto the sand with the help of a large wave. I later discovered that the bass weighed 35 pounds when I brought it to a local tackle shop. At the time, it was my largest striper from the surf.

When the storm hits and the waves are big, be sure to pack these lures in your surf bag for the best shot at hooking a high-seas striper.

Surfcasting in a storm can be “combat fishing” at its finest. With large waves, dirty water, and howling winds, finesse fishing goes out the window. You’ll want to fish the lures that will stand out amidst all the commotion. This means large lures, bright colors, and even some noise.
You’ll want to choose a lure that will grab a bass’s attention and hang in the strike zone long enough to get whacked. With large waves and rough water, this can be easier said than done.

If extremely heavy winds don’t make casting them prohibitive, large swimming plugs are good choices. Plugs such as the Gibbs Danny, Atom 40, and Atom Junior are great big-water bass catchers. They can be fished successfully in between breaking wave swells, where stripers will be hounding disoriented baitfish.

If the wind makes casting the metal-lipped swimmers impossible, you can sacrifice some of the action for casting distance by switching to a bottle-style swimmer or Polaris-style popper. Bottle-style plugs are designed to dig and swim true in even the roughest water. With Polaris-style popping plugs, try dragging them across the top of the water and then pausing them for a short period of time. A Polaris popper hanging in the white water makes for a deadly imitation of a mullet or other migrating baitfish getting pushed around by the waves.

When using surface plugs in rough water, you will receive some of the most spectacular strikes you’ve ever seen. Because a bass knows the bait could quickly disappear in the turbulence, it will often throw its entire body at the target, driving itself almost completely out of the water.

If plugs aren’t working, you may want to try a bit deeper in the water column by throwing metal lures, bucktails and plastic swim shads. I like the Hopkins No=Eql in weights between 3 and 4 ounces, but for the bucktails and shad jigs, 1½ to 3 ounces seems to be the best size range.

When we look at the turbulent water stirred up by storms, it’s tough to imagine that fish can see enough to swim and even feed under these conditions. Big bass are built for these conditions. Their broad tails easily handle heavy currents and rough water, and their lateral lines and other sensory organs allow them to sense distressed baitfish, even when visibility is terrible. Bass are also more sensitive to changes in barometric pressure than we are, and it is possible that they can sense an upcoming storm long before we fishermen are feeling its effects.

A few of the factors play a role in how successful a storm event will be for striper surf-fishermen. It helps greatly if there has been fair, stable weather for a number of days prior to a storm, which sets the table for the bass to go on a feeding frenzy just before, during, and right after the front’s passage. The stable weather will allow baitfish to concentrate in large schools, making a feast for the stripers when the rough weather moves through and disorients the bait. Storms tend to scatter bait, however, so often, by the end of a storm, baitfish will be spread out and striper fishing can be difficult.

The phase of the moon also plays a role in how heavily stripers will feed during a storm. The period from three days before to three days after the new or full moon can be prime time when a storm is brewing.

Changing light conditions will spark a strong bite when the weather goes south. Sunrise and sunset often have the best fishing, even more so than after dark.

Don’t forget about natural baits either. When the storm passes and the ocean starts to settle, fishing bait on the bottom can result in some very impressive stripers. The heavy seas during a storm often dislodge and crack open clams, crabs, mussels and other forms of marine invertebrates, making easy pickings for opportunistic bass looking to scrounge up a free meal. Fishing fresh clams on the bottom gives you a great chance of connecting with a large bass. Bunker chunks will also work, but keep in mind that clams will be the primary bait stripers are after under these conditions.

For harsh weather, you’ll want heavy-duty gear. Even in areas where 8- or 9-foot surf rods suffice most of the time, under stormy conditions, you’ll want to bump up to a 10- or 11-foot rod with a matching reel to throw heavier lures and to beat stripers that will be using stronger currents and bigger seas to their advantage.

Foul-weather gear is essential for your own safety. Make sure you have a wading belt, as things can happen very quickly under ugly conditions, and the last place any fisherman wants to wind up is in rough water with his or her waders filling up with water. If you plan on getting on the rocks, be sure to bring Korkers or other studded wading soles to help you keep your footing.

As with any other sport, knowing your limitations regarding safety should be of the utmost importance. Take time to assess conditions for a moment, before marching out to a jetty tip or sandbar. A whipped-up ocean is a wonderful creation of nature. It can provide the fish of a lifetime, but it can also be deadly, so always remember to put safety first when fishing a storm-driven surf.

When trying to decide where to fish during a storm, you’ll want to look for areas with strong ocean currents and wave action. This usually occurs around irregular structures, especially places that interrupt the general contour of a section of beach. This includes sandbars, sloughs, points, jetties and inlet mouths. In rough conditions, all of these areas draw aggressively feeding stripers.

My favorite location during the height of a nor’easter is along the north side of the longest jetty in the area that interrupts an otherwise featureless beach. The wind and pounding waves force baitfish into the pocket formed between the jetty and the beach, and when bass find them, the fishing is incredible. One of the most incredible sights a surfcaster can see is a blanket of white water in one of these jetty pockets with the greenish-black backs of blitzing stripers tearing through the foam as they feast on baitfish.

My detailed logbook dating back almost 25 years has revealed a definite pattern pertaining to the positive influence storms have on striped bass feeding behavior. Some of my largest stripers during the past 2-½ decades have come during nasty storm systems, so it pays to get onto the beach even when the weather is doing its best to keep you indoors.