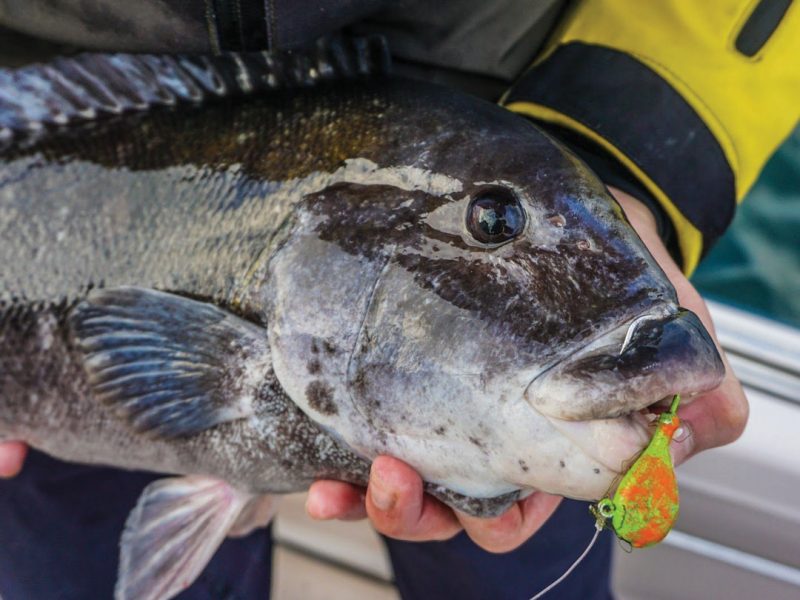 During the fall of 2022, the Division of Marine Fisheries (DMF) held public hearings and solicited public comment on a variety of fishery management regulations including measures affecting the recreational tautog fishery and the recreational lobster and edible crab trap fishery. Following approval by the Marine Fisheries Advisory Commission, DMF has enacted the following regulatory amendments effective for 2023.

The 2023 recreational tautog fishery is scheduled to open on April 1. In prior years, a 16” minimum size limit has applied. However, beginning in 2023, the fishery will be subject to a slot limit of 16” to 21” with an allowance for each angler to retain one trophy fish measuring greater than 21” each day. Tautog are measured in total length, which is the straight-line measurement from the tip of the snout to the farthest extremity of the tail.

For 2023, DMF is enacting two changes affecting recreational lobster and crab trap fishing. Both measures address the potential interaction between the gear and right whales.

Recreational lobster and crab trap fishers using buoyed gear are no longer required to rig their buoy lines with a weak link (capable of breaking at 600 pounds of tension) at the buoy. Weak links were designed to allow for a buoy to part from its line should the line entangle a right whale. However, the entanglement record shows little evidence the gear modification works as intended and ultimately does not lead to risk reduction. As such, DMF is rescinding the requirement for recreational fishers to rig their buoy lines with this device. While the use of a weak link at the buoy is no longer a mandatory requirement, fishers may continue to deploy buoy lines with the device installed. Many fishers favor this device because it makes the gear easier to fish.

The November 1–May 15 closed season for buoyed recreational lobster and crab trap gear may now be extended past May 15 or rescinded after May 1 based on the documented presence or absence of right whales in state waters. DMF implemented this seasonal gear closure in 2021 to reduce the potential for the gear to become lost or abandoned as a result of winter storms, and to eliminate the risk that a buoy line may entangle an endangered right whale during the winter and early spring months when they aggregate to feed in our inshore waters. DMF has successfully managed commercial fixed gear fisheries with this dynamic management approach over the past several seasons and is now applying it to recreational fixed gear fisheries as well.

For more information regarding the management of marine fisheries in the Commonwealth, please visit our website: mass.gov/marinefisheries