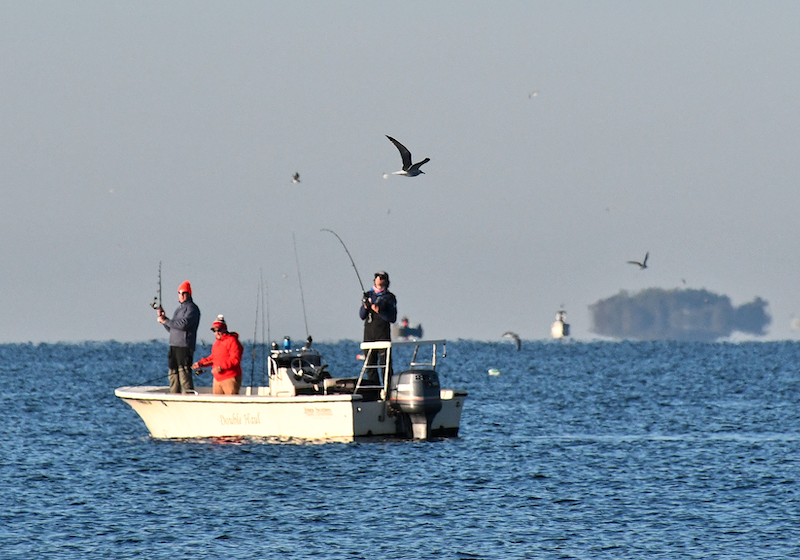 (Above) Action shot from this year’s tournament. Thanks to all who participated!

The catch-and-release, fly and light tackle tournaments raise money and awareness for conservation of fisheries and marine resources, and this year supported the American Saltwater Guides Association, Save a Million Bass and the Captains for Clean Water Hurricane Ian Relief Fund.

Anglers fish individually and on teams of up to four, targeting striped bass, bluefish, false albacore, bonito and Spanish mackerel on fly and artificial lures.

On the fly side of the tournament, Max Kantor on team Light Bite Charters had an incredible Saturday, landing two slams and winning first place in striped bass on fly (67”), hard tails landed (2 fish) and the individual slam with a striped bass, bluefish and false albacore totaling 92”.  Lucas Gillespie from team Oh my FOD finished second in the individual slam with a striped bass and bluefish totaling 64”, and Taylor Ingraham of team Far Right Twix finished third in the slam with 56.5”.  Danny Westfield, also of team Oh my FOD, took home first place in the bluefish on fly category, with two fish landed totaling 64.5”.

For the first time in the five year history of the tournament, the team champion title was successfully defended, with team Porgy Picatta taking home first place again, this year with a total of two albies, two bluefish and two striped bass totaling 190”.

The inaugural Eastern Sound Tournament was held September 30-October 2, and had eight boats and 24 anglers participating.  Despite dealing with the remnants of Hurricane Ian for much of the weekend, every boat toughed it out and found incredible striped bass and bluefish activity, mostly centered around the mouth of the Connecticut River.  Matt Quinlan of Team Far Right Twix took home first place in the conventional striped bass division, with two stripers totaling 85”, and Ryan Joyce, also of team Far Right Twix, won the bluefish category with two fish totaling 67”.  Ryan also took home the top individual slam, with 76” across his largest striped bass and bluefish.

While the albies did not show themselves on the CT side of the river, Arek Zenel Walasek, who fished from Long Island with team Chousen One, headed down to the beach when the weather prevented their boat from leaving the harbor and landed two albies to take home the hard tail category.

For more information on the Tightlined Slam Tournaments, the rules, results, sponsors and organizations the tournaments support, visit www.tightlinedslam.com and follow @tightlinedconservation on Instagram.